Joshua Kimmich played a big role in keeping Bayern’s winning run intact. With the score at 2-2, Kimmich set up Jérôme Boateng’s goal with a corner in the 79th minute, before putting Leroy Sané free on the right to score in the 83rd. 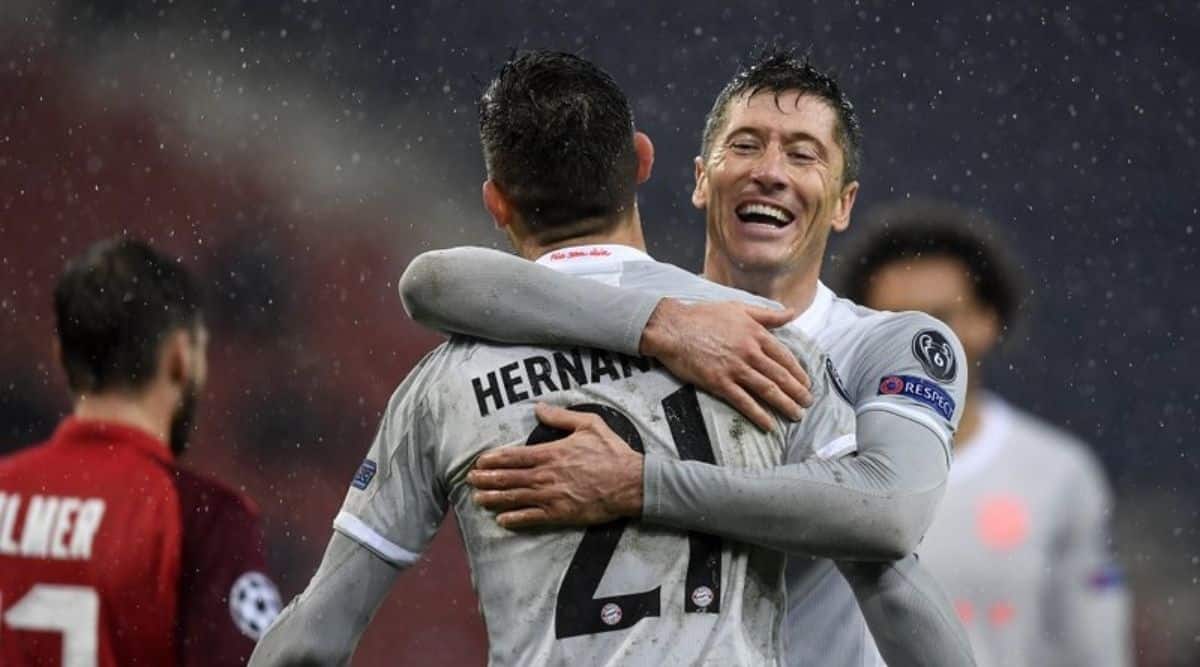 Defending champion Bayern Munich scored a flurry of late goals to beat Salzburg 6-2 away and extend its Champions League-record winning streak to 14 games on Tuesday.

Joshua Kimmich played a big role in keeping Bayern’s winning run intact. With the score at 2-2, Kimmich set up Jérôme Boateng’s goal with a corner in the 79th minute, before putting Leroy Sané free on the right to score in the 83rd. The substitute curled the ball inside the far post with his left foot to effectively seal Bayern’s third win from three games in Group A.

Salzburg’s defense crumbled in the final minutes, with Robert Lewandowski grabbing his second goal of the game in the 88th, before Lucas Hernández rounded off the scoring in injury time.

“It sounds like it was straightforward, but it was anything but,” Bayern coach Hansi Flick said. “We showed our strengths in the end. I’m very happy with the mentality my team showed.”

Flick celebrated one year in charge of the Bavarian powerhouse. Since taking over on Nov. 3, 2019, he has overseen 43 wins from 47 games, winning the Champions League, Bundesliga and German Cup among other, minor titles.

Both teams observed a minute’s silence for the victims of an attack in Vienna on Monday.

Bayern was without Leon Goretzka due to a calf problem and Niklas Süle due to a coronavirus infection. The visitors were stunned when Mergim Berisha opened the scoring in the fourth minute for Salzburg, which is coached by American Jesse Marsch. Berisha beat Manuel Neuer at the near post after Sékou Koita’s initial effort was blocked.

Hernández was awarded a penalty after falling under Dominik Szoboszlai’s challenge, but the decision was reversed after a VAR review as Hernández made the initial contact.

Serge Gnabry had an equalizer ruled out for offside, before Neuer made a great save to deny André Ramalho at the other end in the 17th.

Bayern was awarded another penalty after Enock Mwepu fouled Thomas Müller. This time there was no objection and Lewandowski equalized from the spot in the 21st.

Salzburg’s aggressive tacking and high-pressure game prevented Bayern from settling, however. The champions were forced to make do with less of the ball than usual.

But a moment of class led to Bayern’s second goal just before the break. Lewandowski laid the ball back for Müller, who fired in a cross that Rasmus Kristensen headed into his own net ahead of the lurking Corentin Tolisso.

Ferran Torres is proving to be a more-than-adequate makeshift striker for Manchester City. The Spain winger scored for the third straight Champions League game to set City on its way to a 3-0 win over Olympiakos on Tuesday, which maintained the English team’s 100% record in Group C.

Torres, in his first year at City following an offseason move from Valencia, has only been deployed as a striker because of injuries to Sergio Agüero and Gabriel Jesus.

Jesus has regained fitness after six weeks out and came on in the second half, adding the second in the 81st minute with a rasping shot into the roof of the net from a narrow angle. Joao Cancelo added a third goal in the 90th.

It remains to be seen whether the cameo from Jesus is enough to convince City manager Pep Guardiola to start him in the big match against Liverpool in the Premier League on Sunday.

Dusan Tadic scored one goal and set up another to lead Ajax to a 2-1 win over FC Midtjylland in the Champions League on Tuesday, a day after being seemingly ruled out of the game by his coach after a positive test for the coronavirus.

Tadic was one of a raft of senior players — including goalkeeper André Onana and midfielders Davy Klaassen and Ryan Gravenberch — not included in a reduced 17-man group that travelled to central Denmark on Monday because of the positive tests. They did travel in a separate party that evening, though, and were allowed to play after supplying a negative test ahead of the match.

Tadic set up a goal for Antony after just 50 seconds with a neat touch and pass, then scored himself off an indirect free kick from the edge of the six-yard box in the 12th after Midtjylland goalkeeper Mikkel Andersen picked up a back-pass.

Anders Dreyer pulled a goal back for the Danish champions in the 18th minute, cutting inside from the right and curling left-footed past Onana from just inside the penalty area.

Klaassen came off the bench for the second half to help Ajax close out its first win after three games in Group D.

Porto secured a second straight win in the Champions League with a 3-0 defeat of Marseille that all but ended the French side’s hopes of qualifying from their group.

Moussa Marega scored early for the Portugal champions, Sergio Oliveira doubled the home side’s lead with a first-half penalty, and Luiz Diaz completed the scoring in the 69th minute.

After a seven-year absence, Marseille’s return to the elite tournament is proving a nightmarish experience. The 1993 champions have now lost their first three matches in Group C and have yet to score a goal in the competition. With its loss, Marseille became only the second team to lose 12 consecutive matches in the Champions League after Anderlecht.

Manchester City leads Group C with nine points, three more than Porto. Olympiakos, which lost 3-0 to City in the group’s other match, is third with three points.

Despite the changes made by coach Andre Villas-Boas following last week’s 3-0 loss to City, Marseille created very little in a sterile display and was once again overwhelmed.

Lokomotiv Moscow and Atlético Madrid drew 1-1 in Group A of the Champions League on Tuesday, missing a chance to move closer to group leader Bayern Munich.

Bayern can increase its advantage at the top when it visits last-place Salzburg later on Tuesday. The defending champions enter their match with six points, two more than Atlético and four more than Lokomotiv.

Atlético opened the scoring with a header by José Maria Gimenez in the 18th but the hosts equalized with a penalty kick converted by Anton Miranchuk in the 25th after video review determined there was a handball by Atlético midfielder Héctor Herrera.

Atlético pressed forward in the second half and came close to scoring the go-ahead goal a few times. Lokomotiv goalkeeper Guilherme made a few good saves early on, and Luis Suárez had a goal disallowed for offside after a header by Jorge “Koke” Resurrección struck the crossbar in the 66th.

Suárez also came close from inside the area after a pass from João Félix in stoppage time.

“It’s frustrating because we created scoring chances and got near the goal,” Gimenez said. “We needed to be a bit more calm in the final meters.”

Lokomotiv and Atlético meet again on Nov. 25 in Madrid.