Julian Wood is an Englishman who inculcates the most valuable skill in T20 cricket – hitting sixes. 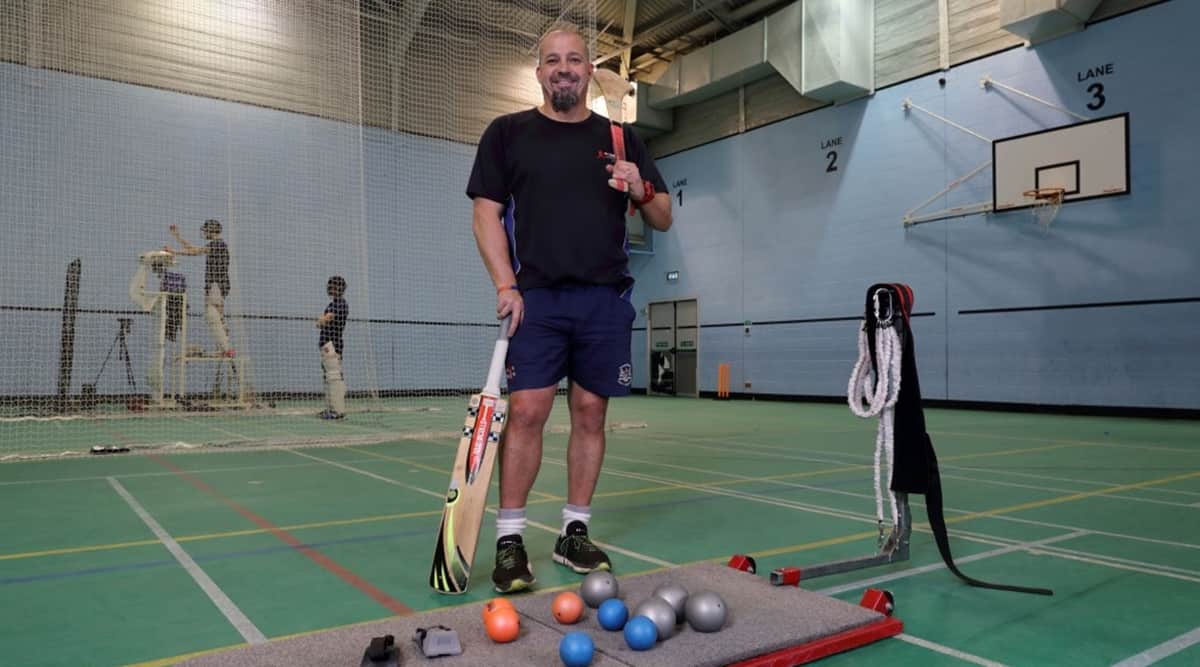 If the pandemic hadn’t struck last year, and his negotiations with Rajasthan Royals hadn’t derailed, cricket fans might have seen a beefy figure roaming around the IPL franchise’s dugout. They would have seen Julian Wood, a pioneering power-hitting coach, carry his odd-shaped Irish hurling sticks (like a long thin paddle), bungee-ropes on a batsman’s hips with the other end tied to a pole, claw hammers, weighted bats and other mind-boggling equipment.

“Players tend to work with me for intense workshops before they go off to BBL, CPL, IPL, and (other) T20 tournaments. I saw where the game was going before anybody else. I am confident in saying that after speaking to a lot of players over the years,” Wood tells this newspaper how he started to explore power-hitting around 12 years ago after an unexpected stumble into the world of baseball while on a holiday in the United States.

Some of the names who have worked with him are Carlos Brathwaite, Sam Billings, Ben Stokes, Prithvi Shaw, and even touch players who want to improve their power-games like Sam Curran and Joe Root. “I work with the England counties, stints in BBL.”

The technique behind power

Wood sums up his philosophy: “White-ball batting is hand-eye coordination with power and skill. When you bat, you lead with your head. When you hit, you lead with your hip more. It’s about generating power ground-up, from the hip to the hands. Cricket has been traditionally too hand-reliant. That has to change. Power comes from the torso and hips. A kinetic chain of energy happens when you hit the ball explosively: it comes up from your back leg to your hip, to your back, goes to shoulder, elbow, and finally to wrists. What I try to do is to join the dots up. You need to separate your hands from your body. You need to do that separation to improve explosiveness. You see that in baseball, the back leg goes back, hands are separated from the body so to say, and then explosion kicks in.

“You have lots of energy stored up in your wrists. And it’s only now that people are accessing that: snapping wrists to hit the ball. Some do it naturally, like Virat Kohli. Some big hitters like the Caribbean ones do it. It’s now catching up elsewhere. For players who don’t do it naturally, I try to create it by their natural movements. Using wrists is the last part of the kinetic chain of events. How to get that final snap.”

Methodology all his own

Here is where his odd equipment comes in. Like a bungee-pull on back hips, “a rope that’s tied to a pole that forces the batsmen to get his torso and hips into the shot”. Like the claw hammer. “To get that final wrist snap. I get them to use a claw hammer; to snap it in a side-ways arc, like how you use the bat, and it helps in cocking the wrist better.” Like the hurling stick, picked up from the Irish game. “The Hurly players hit the ball across the length of a soccer ground. There is no balance but the way their wrists snap is amazing. I started to experiment with it and put drills in place.”

Then there are the weighted bats and weighted balls, even. “These special balls sit on the bat for a long time. You have to get your hands through, otherwise, they don’t go anywhere. I put weights on your forearms to help with that snap. If you use a hurling stick with weights on your forearms, your wrist-snap improves. In baseball, they don’t look at the outcome. In cricket, it’s all so outcome-based. Why didn’t the ball go there, it should have gone there, etc. In baseball, it’s all about technique. You trust the technique, and the outcome takes care of itself. That’s what I have taken from it. But you can’t cookie-cut this. Every batsman swings differently. Carlos Brathwaite has slow hands and smaller batsmen swing differently. The way I coached Carlos is different from the way I coach Curran.”

Thinking out of the box

Wood played for Hampshire and felt he was constrained by traditional conservative coaching. Then he got into coaching himself, but it really started to change on a holiday in Texas. “My boys were hitting at baseball cages and I saw a big trick with Texas Rangers all over. I got talking with a hitting coach Ted Vidrine who put me on Scott Coolbaugh, who is Rangers’ hitting coach. My mind started to expand, and I started to think how I can bring it to cricket.”

Once he firmed up his methods, Wood drove in a van with his equipment to Graham Thorpe at England and Wales Cricket Board. “I showed him the stuff at the back of my van and explained. He went, ‘whoa, this is good’. Then Gloucestershire’s coach John Bracewell and then Andy Flower got me into England Lions. Peter Moores had me working with the England team. It feels good that I have contributed something to the fact that the England team is the main big-hitting team in the world with tall scores.”

The latest feel-good movement came in the summer when England was playing Pakistan. “Joe Root hit a few sixes, mind you after he reached his hundred (laughs), (and) the television commentators mentioned my name. That felt satisfying. There are a lot of copycats now, but I know what I have done to the game as a pioneer. I measure the power-hitting, the hand- speed, the bat-exit speed, the launch angles – and all this now is part of cricketing terminology too. It feels good. Now, bring on the IPL next year!” he laughs.