German javelin thrower Johannes Vetter is giving the phrase ‘new normal’ a context outside of the pandemic.

What has become habitual this season for the 6’1″ and 103-kilogram athlete from Dresden are 90 metre-plus throws. Vetter, a favourite for the Olympic gold in Tokyo, has seven such throws this season.

His recent feats are evoking comparisons with one of the greatest, world record holder Jan Zelezny. The Czech’s 14 throws over 90 metres back in 1995 is a single-season record, according to World Athletics. Vetter remains in the shadow of the Czech great, but for how long is the question.

In September, Vetter came close to bettering Zelezny’s hallowed mark of 98.48 metres set in the mid-nineties.

At the Continental Tour Gold event in Chorzow, Poland, officials, caught napping, had to run to the far end of the field to retrieve the javelin. Vetter’s 97.76 metres was as close as anyone had got to rewriting the record books since Zelezny in 1996.

In the year of the postponed Olympics, the 28-year-old has made ‘consistency’ his middle name. In a short span of time, he has won four events in a row with 90-metre throws. Only Zelezny, with five back-to-back wins in the same year, can boast of a better run at this distance. 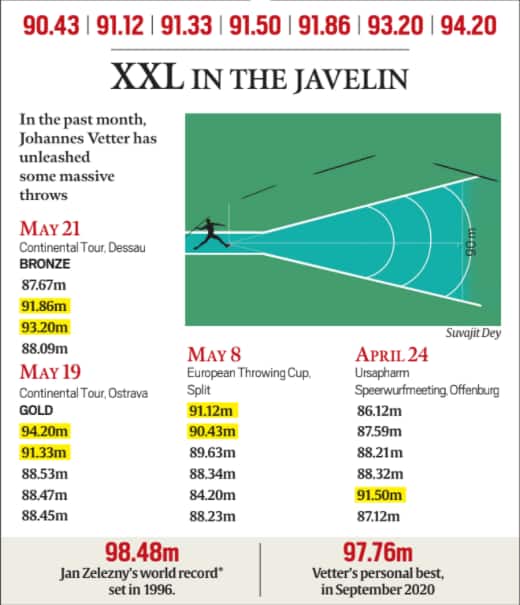 Built like an oak and strong as an ox, Vetter has combined technique and power to become an awe-inspiring giant in the javelin throw. Every other week, he has launched carbon-fused meteors across stadiums as ‘gravity-defying’ becomes less of a cliché.

Wind conditions or the temperature, two factors that can affect participants of the outdoor event, were overcome by Vetter as if they did not matter.

Last Wednesday at the World Athletics Continental Tour at Ostrava, Croatia, Vetter produced 94.20 metres, a world-leading distance. After the event, while talking about the conditions, Vetter told the official broadcaster, “I think it was 12 degrees here, the wind was a bit difficult, always changing a bit, the wind directions, still 94.20 metres.”

Two days later on Friday, Vetter didn’t go off the boil. At the Anhalt Meeting, part of the World Athletics Continental Tour Bronze series, in Dessau, he registered a throw of 93.20 metres in the third round. He followed it up with 88.09 metres after which he decided not to stretch himself and skipped the last two rounds.

“It was a great throw,” said the 2017 World Championships gold medallist. “But of course the world record would be even better. It was great training for me. I made only small mistakes and managed to hit the javelin very cleanly.”

Questions about the world record are bound to be asked to Vetter. With two months to go for the Olympics, experts believe one of the longer-standing marks could fall.

“His technique has improved and is more stable in the important parts. He will probably do it sometime (break the record). Maybe this year. He is also not far from 100 metres. Can’t see someone else doing this at the moment,” Uwe Hohn, the only athlete to throw the javelin over 100 metres, tells The Indian Express.

Hohn, the javelin coach of the Indian team, achieved what is known as the ‘eternal world record’ of 104.80 metres in 1984. Two years later the centre of gravity of the sphere was moved forward to shorten distances.

Vetter’s countryman and 2016 Rio Olympics gold medallist Thomas Röhler has spoken about wanting to throw 100 metres. “I said to people I want to throw the 100, just to find out if it is possible for humans,” Röhler told Trans World Sport in an interview.

With the competition circuit getting busier ahead of the Tokyo Olympics, some of the top throwers including Röhler will begin their season soon. In a sport of fine margins, fortunes can change quickly.

Vetter looks to be close to his very best this year after overcoming personal loss and injury.

When he won the 2017 World Championships gold in London, Vetter was going through a difficult time because his mother was unwell.

“It was a crazy time because my mom had a surgery one week before because of a brain tumour. I was also struggling with my back one week before the World Championships started. When I was winning the title, I was making a round of the stadium and I saw my father in the crowd and it was like really emotional because my mom was that ill and it was like a bit of mental pain but I was really happy that my family stands behind me,” Vetter told World Athletics’s podcast last year.

By the end of 2018, Vetter’s mother passed away. He says the family knew she would die following the medical diagnosis. “It was really hard to handle. Private life is very hard and your sports life is really tough as well.”

It took almost half of 2019 to figure out why the left ankle was troubling Vetter. He would have doctor visits every week and injections became a part of his life. At the Doha World Championships, Vetter finished third. Four days later he went in for surgery. Post-operation, Vetter was able to take time to reflect on what he went through over the past two years.

“I had some time to realise what happened during the last one and a half, two, three years. It helped me a lot to find my way back into life.”

This weekend Vetter will be at the European Athletics Team Championships, another competition he will be using to build up for the Tokyo Olympics. There is anticipation about how far the German will throw.

The luxury of travel and participating in competitions abroad is something India’s Olympic medal hope Neeraj Chopra does not have. Restrictions imposed by countries on flights from India because of the pandemic and the mandatory lengthy quarantine have resulted in Chopra being stuck at the National Institute of Sports in Patiala.

Two years away from international competition, because of injury as well as the pandemic, has left him frustrated. At the 3rd Indian Grand Prix in early March, Chopra rewrote his national record with a throw of 88.07metres. But since then he has been on a constant cycle of just training.

“It is getting difficult because along with training, I need competition. Most of 2019, I missed because of injury and in 2020 and 2021, nothing has happened because of Covid. How long will one be patient? For one year or two years…,” Chopra had said earlier this month.

Dr. Klaus Bartonietz, a biomechanical expert and coach Hohn are now trying to get Chopra to replicate ‘competition mode’ during practice.

“Neeraj is throwing better in training and throwing also more intensive but it’s not replacing competitions that he needs urgently. You can also see that Vetter’s technique… sometimes he is jumping forward, sometimes he is doing a better block but to practice that you need competitions without pressure of throwing far… to transfer the technique into competition,” Hohn says.

Both Klaus and Hohn are continuously working on Chopra’s technique while keeping an eye on what the likes of Vetter are doing even as he keeps threatening to break the world record. The German coaching pair have a lot of faith in Chopra. “Neeraj has the talent for it also…,” Hohn says.