The tally also included eight silver and six bronze medals but most importantly, it was a performance during which history was scripted almost everyday with the contingent living up to the 'Spirit in Motion' motto of the Games. 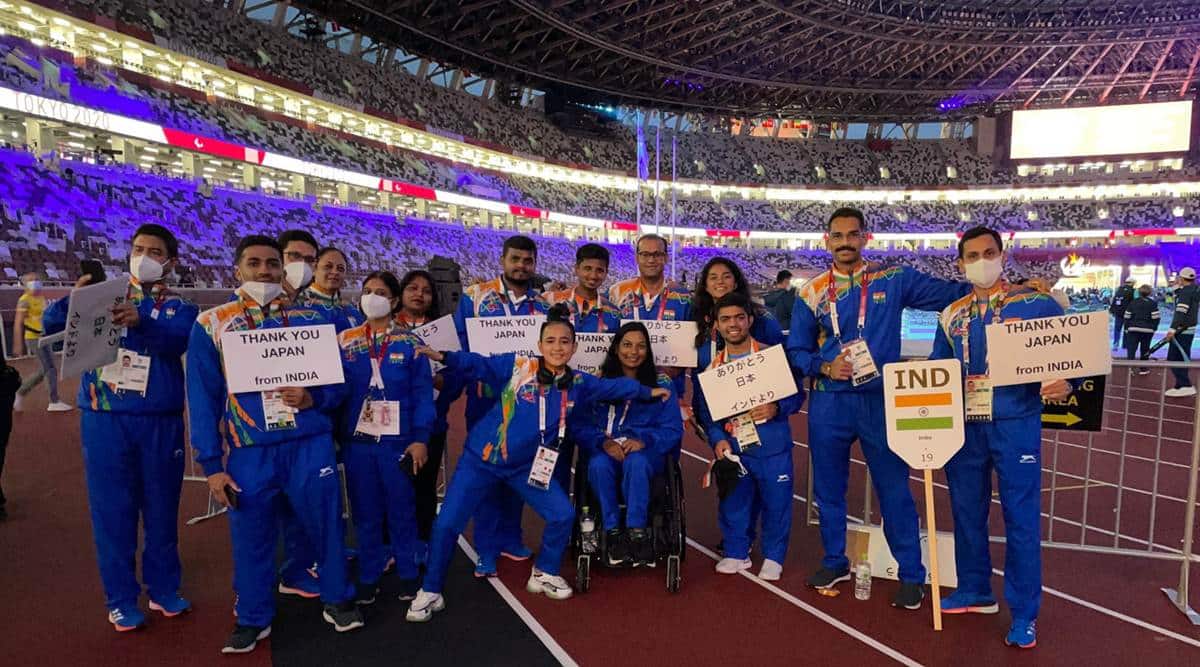 India’s paralympians managed to be all these and much more in an epoch-making campaign at the Tokyo Games where an unparalleled 19 medals, including five gold, helped them sign off 24th in the overall tally — the highest ever. The 19-year-old Lekhara became the first Indian woman to win a Games gold (10m air rifle) and later added a bronze in 50m rifle 3 positions to ensure that her name would now be part of every India-centric Paralympic quiz.  It was an inspiring show by the teenager who was paralysed waist down after being injured in a car accident in 2012. And to think of it, all her father had hoped to achieve by taking her to the shooting range was for Lekhara to get over the anger she had internalised after the accident which left her wheelchair-bound. Nearly half (8) of India’s haul this time came from the track-and-field arena with javelin thrower Sumit Antil shining the brightest with a gold en route which he shattered his own world record five times over. Antil was pursuing a career in wrestling, as his family wanted, before a bike accident led to the amputation of his left leg, changing the course of his life forever.

Another shooting star rose on the horizon with Manish Narwal, all of 19, already a world champion and now a Paralympic champion as well. Narwal’s right hand is impaired and he originally wanted to be a footballer but fate had other plans for the Lionel Messi fan. Bhagat won the Men’s Singles SL3 event badminton gold medal match against Great Britain’s Daniell Bethell at the Tokyo Paralympics on Saturday. This is India’s first medal in badminton at the Paralympics Games. Bhagat was 8 points behind in the second game before making a comeback and wrapping up the match 21-14, 21-17. The 33-year-old Bhagat from Bhubaneswar also remains in contention for a bronze medal in mixed doubles SL3-SU5 class. Bhagat and his partner Palak Kohli will square off against Japanese pair of Daisuke Fujihara and Akiko Sugino in the bronze medal play off on Sunday. 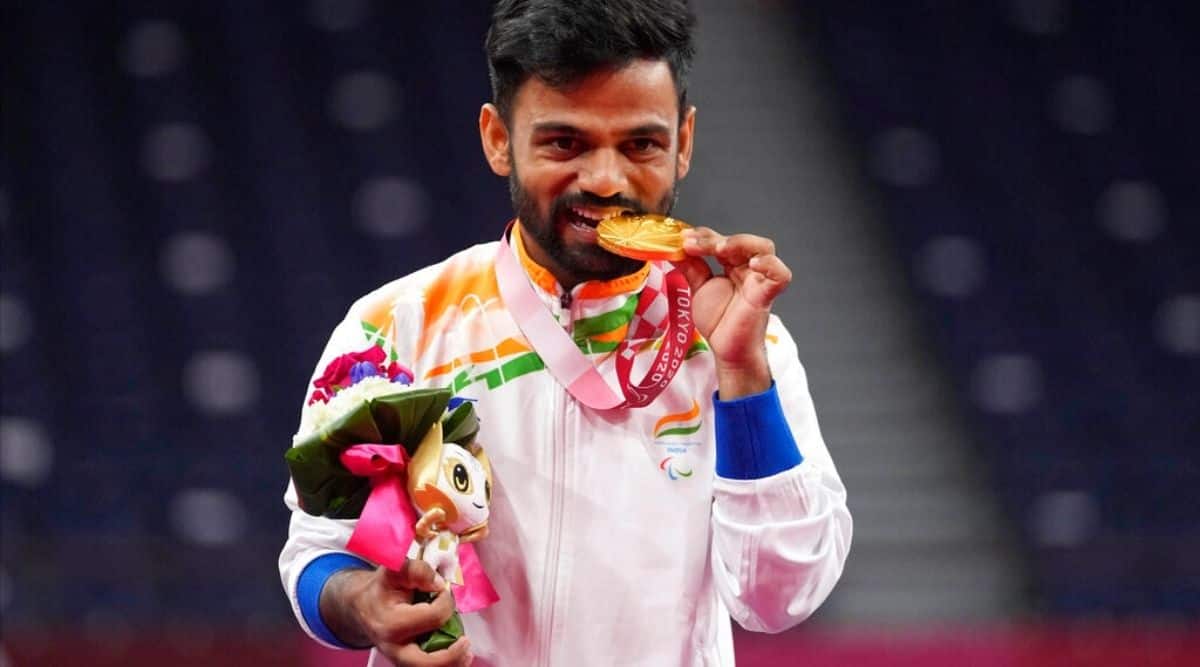 Krishna Nagar won the second Para-Badminton gold for India on Sunday as he beat Hong Kong’s Chu Man Kai 21-17, 16-21, 21-17 in the men’s singles SH6 final. He becomes the first-ever SH6 gold medallist in the history of the Indian Paralympics. This is India’s nineteenth medal and the fifth gold in the event. It was a tight contest right from the start between Nagar and Man Kai Chu. In the first game, Kai Chu headed into the mid-game interval with a slender lead but Nagar came back well to win the first game 21-17. In the second game, the Hong Kong player built a lead and it seemed like Nagar’s game dropped a bit in the first half of the second game. Chu Man Kai continued with his momentum and came back strongly and eventually won the game 21-16. Indian table tennis player Bhavinaben Patel signed off with a historic silver medal in her maiden Paralympic Games after going down 0-3 to world number one Chinese paddler Ying Zhou in the women’s singles class 4 final on August 29. The 34-year-old Patel’s impressive run at the Games ended with a 7-11 5-11 6-11 loss to Zhou, a two-time gold medallist, in the women’s singles summit clash which lasted 19 minutes. 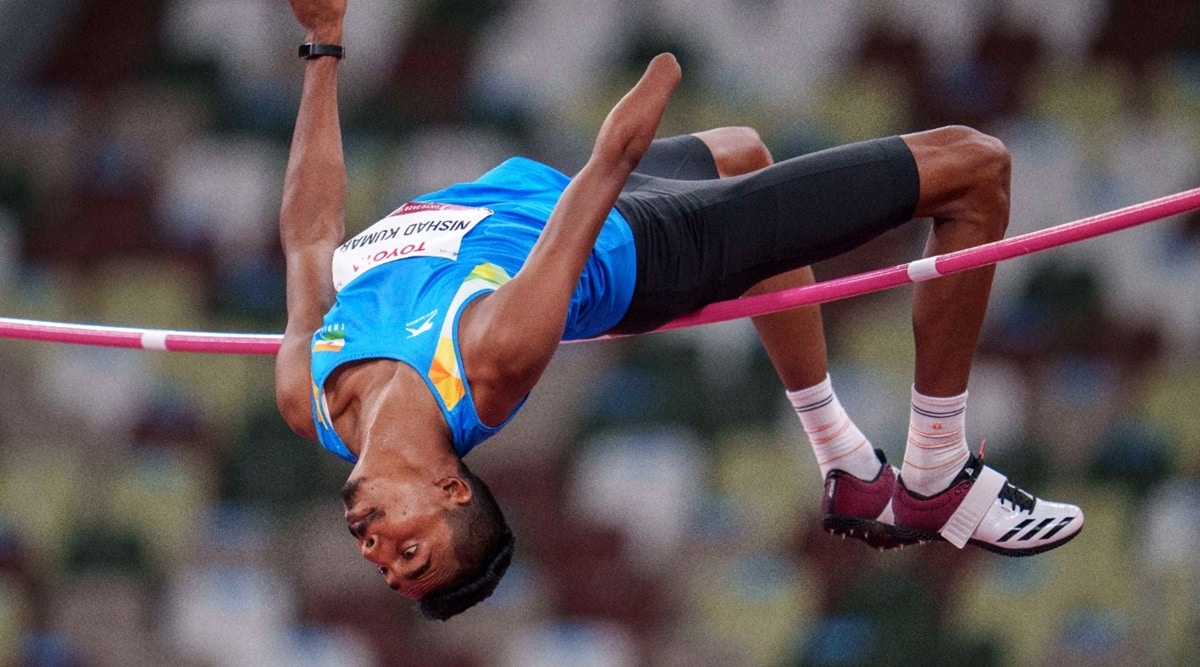 India’s Nishad Kumar clinched a silver medal in the men’s high jump T47 event in the Tokyo Paralympics with an Asian record effort on Sunday. Kumar cleared 2.06m to win the silver and set an Asian record. American Dallas Wise was also awarded a silver as he and Kumar cleared the same height of 2.06m.Another American, Roderick Townsend won the gold with a world record jump of 2.15m. 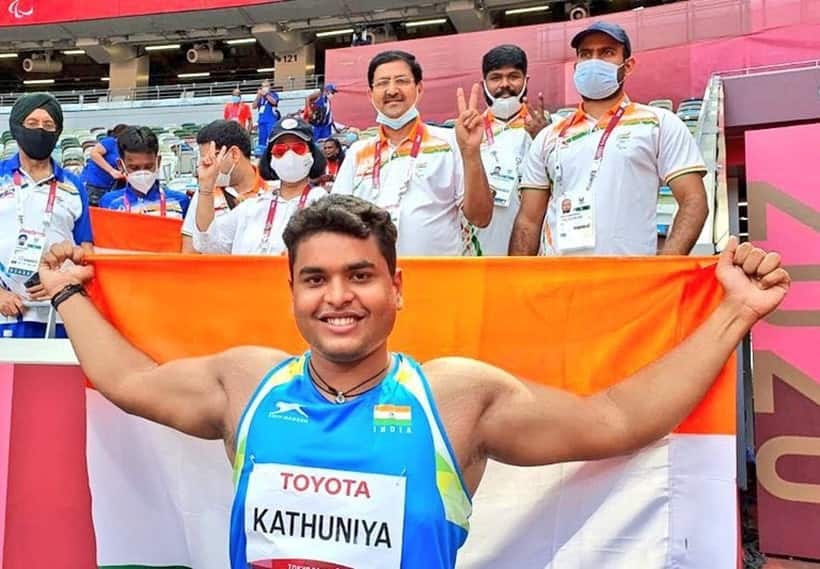 The Indian Paralympic discus throw athlete, who represented India this year, won a silver medal in the men’s discus throw F56 event. He suffers from Guillain Barre syndrome, a rare neurological disorder, and was confined to a wheelchair in 2006. However, he started to walk after his mother gave him physiotherapy. He started in para sports in 2017 while studying at Delhi’s Kirori Mal College. 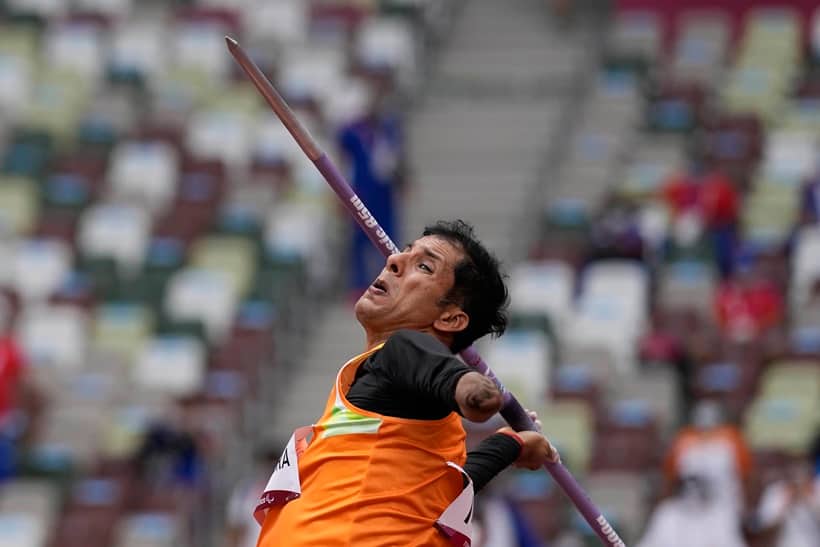 Two-time gold-winning javelin throw veteran Devendra Jhajharia clinched a stupendous third Paralympic medal, a silver this time. The F46 classification is for athletes with arm deficiency, impaired muscle power or impaired passive range of movement in arms, with athletes competing in a standing position. The 40-year-old Jhajahria, already India’s greatest Paralympian after winning gold medals in the 2004 and 2016 Games, pulled off a new personal best throw of 64.35m for the silver. Jhajahria, who lost his left hand after accidentally touching an electric wire while climbing a tree at the age of eight, bettered his own earlier world record (63.97m) but gold winner Sri Lankan Dinesh Priyan Herath Mudiyanselage (67.79m), who set a new world record, was too good for the entire field. 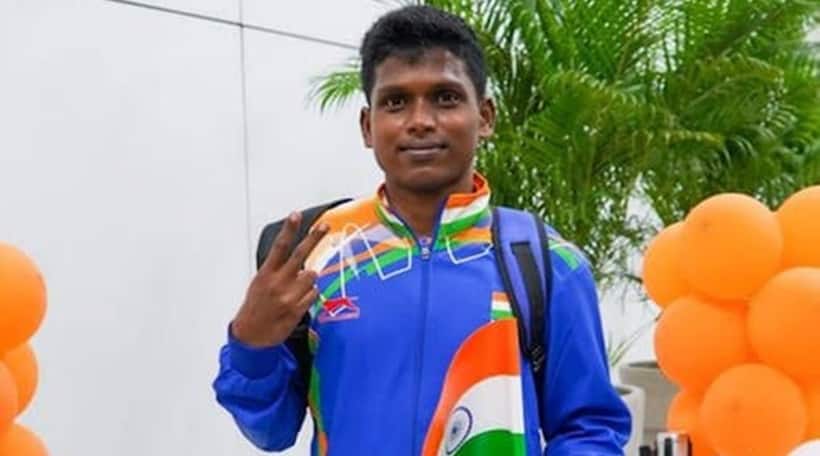 India’s Mariyappan Thangavelu won silver in the men’s high jump finalin Class T42. Mariyappan Thangavelu clinched silver after leaping the mark of 1.86m. This is his second medal at the Games, having already won a gold in Rio 2016. Mariyappan and USA’s Sam Grewe soon completed the 1.86m mark on their third attempt as Sharad had to be satisfied with a bronze after seeing three red flags. Singhraj clinched the Silver medal in the P4 – Mixed 50m Pistol SH1 final on Saturday. He grabbed his second medal of the Tokyo Paralympics with 216.7 points. National Anthem was played when the Singhraj and Manish Narwal were being awarded the medals. Singhraj said he was delighted to see India’s national flag flying high during the national anthem. Earlier this week, Singhraj clinched a bronze medal in the P1 men’s 10m Air Pistol SH1 final. 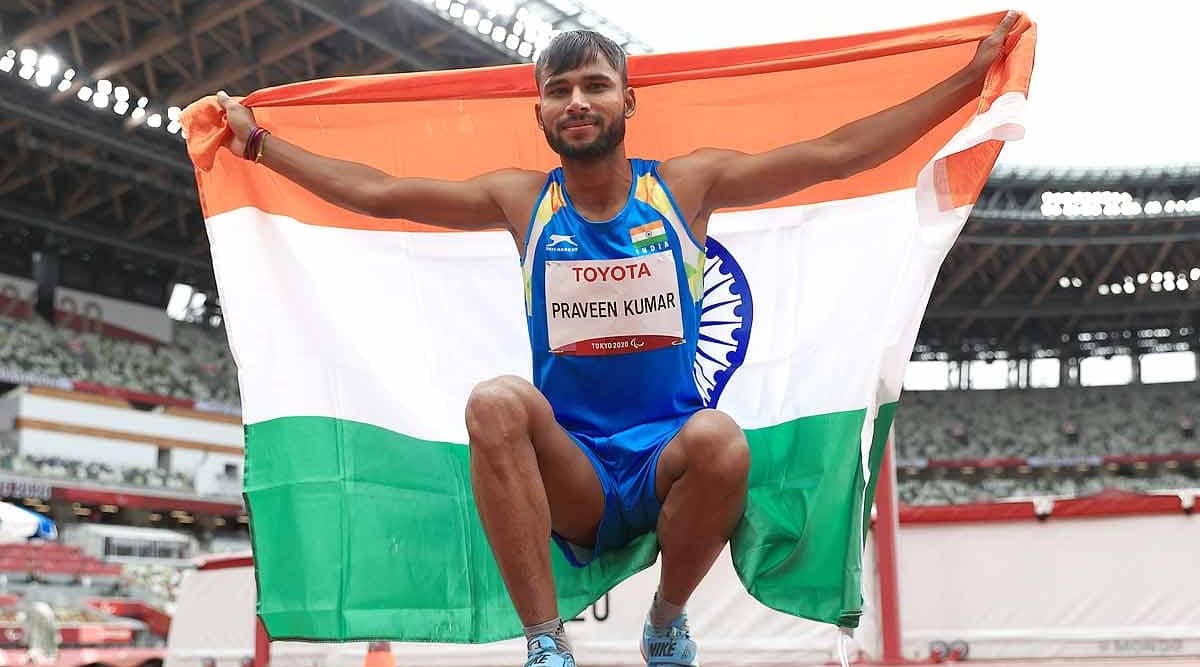 Praveen Kumar clinched the silver medal in the men’s high jump T64 event of the Paralympics, taking the country’s haul to 11 in the ongoing Games. The 18-year-old Kumar, competing in his debut Paralympics, set a new Asian record with a 2.07m jump to finish behind Great Britain’s Jonathan Broom-Edwards, who notched up his season’s best of 2.10m for the gold. India’s Suhas Lalinakere Yathiraj ended his campaign with a historic silver after going down fighting against top seed Lucas Mazur of France in the men’s singles SL4 class final at the Tokyo Paralympics on Sunday. The 38-year-old Noida district magistrate, who has an impairment in one of his ankles, led 11-10 at the decider, but just couldn’t dial down the aggression, getting carried away in the big points. Lucas Mazur kept his calm and raced to win decider 21-15. The left-handed angles and end-game poise helped as the Frenchman claimed gold. Sundar Singh Gurjar also chipped in with a bronze, finishing behind Jhajharia in the men’s javelin throw F46 final. The 25-year-old Gurjar, who lost his left hand in 2015 after a metal sheet fell on him at his friend’s house, was third with a best effort of 64.01m. The Jaipur-based Gurjar had won gold in the 2017 and 2019 World Para Athletics Championships. He had also won a silver in the 2018 Jakarta Para Asian Games. Earlier, discus thrower Kathuniya clinched a silver medal in the men’s F56 event. Harvinder Singh notched up India’s first ever archery medal in the Paralympics, holding his nerves to down Kim Min Su of Korea in a thrilling shoot-off for the men’s individual recurve bronze in the Paralympic Games. World No.23 Singh was the first athlete from India to win a gold medal at a major para competition in the 2018 Asian Games. An economics scholar from the Punjabi University, Patiala, Singh collected three shoot-off wins on the day starting with his triumphs in the opening rounds. 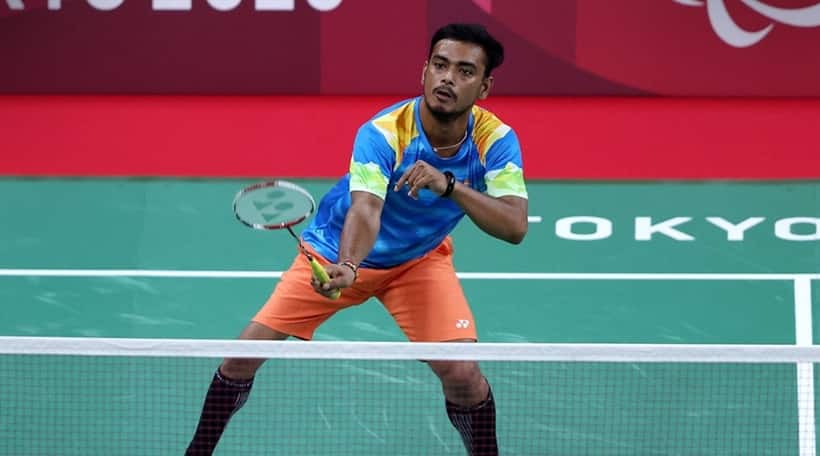 Manoj Sarkar won the bronze medal after beating Daisuke Fujihara 22-20, 21-13 in the men’s singles SL3 event at the Tokyo Paralympics on Saturday. The 31-year-old won in straight games, sealing a 22-20 21-13 win on Saturday. Sarkar crashed to an 8-21 10-21 defeat in the semifinals against Great Britain’s Daniel Bethell, but bounced back strongly to coast past Fujihara. Sarkar won the first game in 22 minutes and the second in 19 minutes.