Bollywood actor Tiger Shroff’s sister Krishna Shroff has announced her split with boyfriend Eban Hyams, which has shocked all her fans. Jackie Shroff’s daughter shared this news on her Instagram story though a note, where she wrote, “All you fan clubs are cute and all, but please stop tagging me in edits with Eban. We aren’t together anymore, so stop associating us.” Both Krihna and Tiger have deleted all their photos from their respective social media accounts. 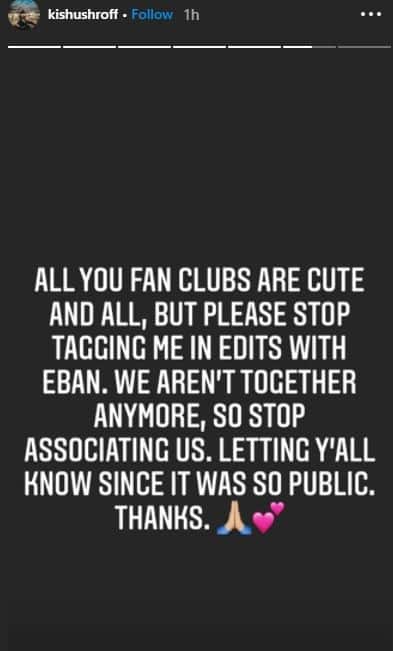 Earlier, Eban had also mentioned how his girlfriend reminds him of his mother. “The personalities that we have are so similar. Sometimes, she reminds me of my mother and I want to be like my father. The qualities she has are the ones you look for. That’s what made our bond so much stronger,” he had said.

Last year, in an interview with Mumbai Mirror, Krishna opened up about how she met Eban, “I was catching up with a friend of his whom I hadn’t met in a long time, but eventually ended up chatting with Eban,” Krishna recalls. When asked about Eban’s “wifey” comment, she laughed, “It’s hilarious, just a term. And it’s crazy how there are so many articles saying we were secretly married. Even my mum (Ayesha Shroff) asked me what was going on.”

On the other hand, when Krishna was asked about her Bollywood debut, she told the tabloid, “I like my own zone and I like being in my own space. I have a couple of friends that I have known for almost 20 years now and it’s just me and them in my own little bubble. If I am not passionate about that one thing then, I won’t give it my 100 percent. I am a very competitive person, so if I know that I can’t give my 100 per cent to something, then I am not going to be the best at it and that’s when I just refuse to do it.”