The open classes are part of the Gujarat education department’s sheri shikshan (street education) initiative that was launched in the last week of June for children who had been left out of the virtual learning programme. 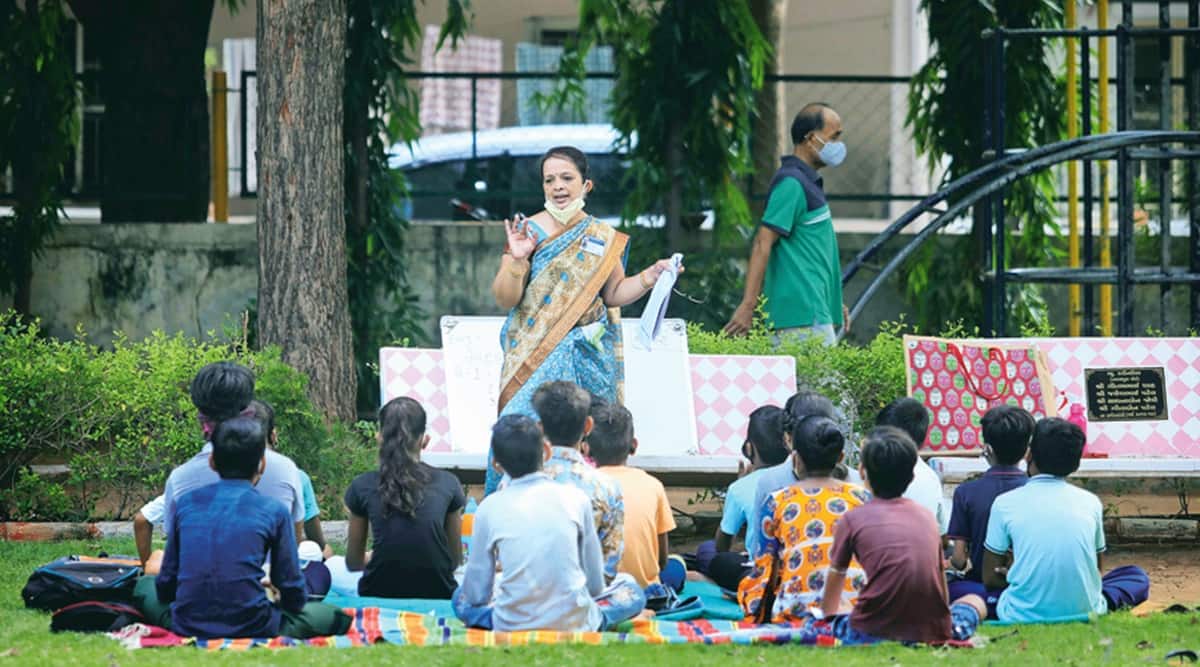 Class 8 has assembled for their English grammar lesson. Not in their classroom, not on screen, but in an open park in the Naranpura area of Ahmedabad.

The white board is propped up on a concrete bench, facing a group of around 15 children, all from the Naranpura Hindi-medium school run by the Ahmedabad Municipal Corporation (AMC). A group of elderly regulars at the park pause to watch the children and their teacher at work. Some distance away, a group of bhajan singers periodically strike discordant notes — about the only time the children look up from their books.

In another corner of the garden, Usha Rajput, the Class 6 mathematics teacher of the same school, is teaching ‘sides and angles’.

The open classes are part of the Gujarat education department’s sheri shikshan (street education) initiative that was launched in the last week of June for children who had been left out of the virtual learning programme. With the pandemic forcing schools shut since last year, teachers are now holding classes for smaller groups in open spaces — in public parks and in temple complexes.

Ruchika Shah, Class 8 teacher of Naranpura Hindi-medium School Number 3, says that while the programme was initially meant for those who had trouble logging in to their virtual classes due to lack of devices or connectivity, the response has been encouraging with many more children joining in.

“For over an hour every day, all of us teachers go to different areas and teach children enrolled in our school. So it’s just like regular school, except that the children are not confined to a room or a building. The classes are only for lower primary (Classes 3-5) and upper primary (Classes 6-8) students. Around 75 per cent of my class attends these classes,” she says.

While the government on Thursday resumed school for Class 12 with 50 per cent capacity, it plans to do so for Classes 9-11 soon.

Ashok Tungaria is among the 13-year-olds sitting for the English class at the Naranpura park. “When the classes were being held online, I could barely understand anything that was being taught because our chawl is usually very noisy… I couldn’t see anything on the screen either. The phone network also gave me trouble,” says Ashok, who is from a family of migrants from Nagaur district in Rajasthan. His father works as a cobbler, usually from home.

Mahavir Singhariya, Ashok’s classmate and neighbour in the chawl, says, “I don’t have a mobile phone at home. Only my elder brother has one. So these classes are very useful.”

Despite the early success of the programme, it wasn’t initially easy to convince parents to send their children to study in places other than their school, says Shah. “Some of the parents were hesitant, especially parents of girls, who weren’t sure about sending their daughters to study in a public space. But they gradually realised their children are in safe hands,” she says.

Nearly a kilometre away, Nayna Sapra and Rashmita Patel, lower primary teachers of Naranpura Municipal School Number 4, are teaching children of Classes 3-5 in a small temple at the entrance of the slum area.

After a quick recap of addition to a mix of Class 3-5 students, they distribute worksheets to the students. “Along with these assignments here, we also give them homework. Since these are small children, it is difficult for them to understand or complete their assignments on the phone,” says Sapra.

Talking about the programme, Malati Patel, principal of the Vadaj Gujarati Medium Municipal Boys School, nearly 4 km from the Naranpura school, says, “While some of the parents did not have smart phones, many of those who did took them to work. So a lot of them ended up missing the online classes. Though keeping this in mind, we did conduct online classes at night during the last academic session, children are happier with this sheri shikshan concept.”

Patel says her teachers have identified six locations in the school’s vicinity for the sheri shikshan programme to target the 380 children who are enrolled in the school’s lower primary and upper primary classes.

“Initially, we taught students inside the chawl in Mangal Porshottam slum, from where most of our children came, but since it was very noisy, parents themselves suggested that we hold classes in this temple,” says Vibhaben Rathod of the Vadaj school.

Sitting on a bench under the shade of a tree, waiting for classes to wind up at the open ground adjoining the Vadaj temple, Parvati Ravat, whose twin boys are in Class 6 at the Vadaj school, says, “We have only one smartphone, which their father takes to work. So the boys could not study at home. I am glad about this arrangement, where children don’t have to miss school and we don’t have to worry about Covid.”

Talking about the success of the programme, Education Minister Bhupendrasinh Chudasama told The Indian Express, “With Covid cases on a steep decline, the government decided to start this initiative of sheri shikshan where teachers reach out to children and teach them in a safe environment. With such a positive response from parents, teachers and students, I have ordered the department to ensure this mode of teaching is conducted across the state.”