Rashtriya Janata Dal leader Tejashwi Yadav on Thursday said that the National Democratic Alliance won the Bihar assembly election by “chhal” (deceit), even though the people’s mandate was in the favour of the Grand Alliance or Mahagathbandhan.

The 31-year-old leader, who was elected the leader of the GA, said the opposition alliance would move court if the Election Commission does not give satisfactory reasons for the rejection of a huge number of postal ballots. Yadav alleged that the coalition lost 20 seats because of lapses during the election process, which derailed its prospects to get a clear majority and win at least 130 seats.

“The NDA used dhan (money), bal (power) and chhal (deceit) to win polls. We could have got 130 seats had there been no electoral malpractices by the ruling coalition. People’s mandate is in our favour whereas poll results have gone in theirs (NDA),” Yadav said at a press conference.

Yadav, who was the chief ministerial candidate of the Mahagathbandhan, said he was not willing to accept that the alliance had suffered a defeat in the state polls. 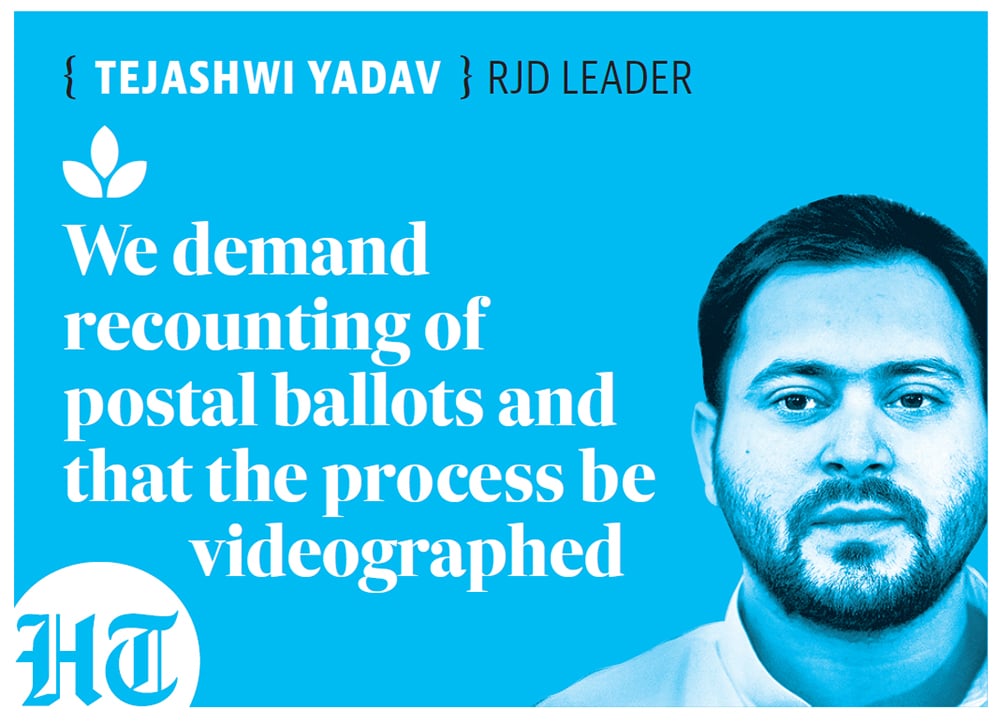 On if the Mahagathbandhan would try to muster numbers to form its government, he said, “We will go to the people who gave the mandate. If they express such a wish we will act accordingly.” Quoting election data, he said the NDA got only 12,270 votes more than the Mahagathbandhan.

“I will soon launch a thanksgiving campaign across for the big support people gave us in terms of votes,” he said, adding the vote share of GA and NDA left enough room to suspect election manipulation.

Yadav clarified that he was only asking why postal ballots in various constituencies were rejected and the reason for not recounting postal ballots despite candidates seeking a written explanation from officials at counting centres on Tuesday.

“We suspect this was done to offset the support we had received from a large number of servicemen who were moved by our commitment to one rank, one pension scheme. We demand recounting of postal ballots in all such constituencies and the process be videographed,” Yadav asserted.

Targetting chief minister Nitish Kumar, the RJD leader said the Janata Dal (United) chief, who had mocked his poll promise of giving 1 millions jobs, should introspect why people had relegated his JD(U) to a third among the major parties in Bihar.

“RJD has emerged as a single largest party while JD(U) is a poor third after BJP. If the chief minister has some morality left, he should quit from the top post. As Kumar announced it was his last election, it would be better that he quits gracefully to avoid more embarrassment,” Yadav said.

Meanwhile, Congress’s poor show in the state polls triggered a blame game in the opposition alliance, with CPI-ML general secretary Dipankar Bhattarcharya saying that the party’s low strike rate had impacted the overall performance of the Alliance.

“There have been some shortcomings on the Congress side, be it in candidate selection or campaign. The strike rate is low and they should introspect,” he said.

Yadav, however, evaded queries on Congress’s performance. “We have all worked together. People have given big support to the GA for change,” he said. The Congress won only 19 of the 70 seats it contested.

Meanwhile, senior Congress leader Tariq Anwar said the party should review its shortcomings in the state polls so that it is well prepared for next elections.