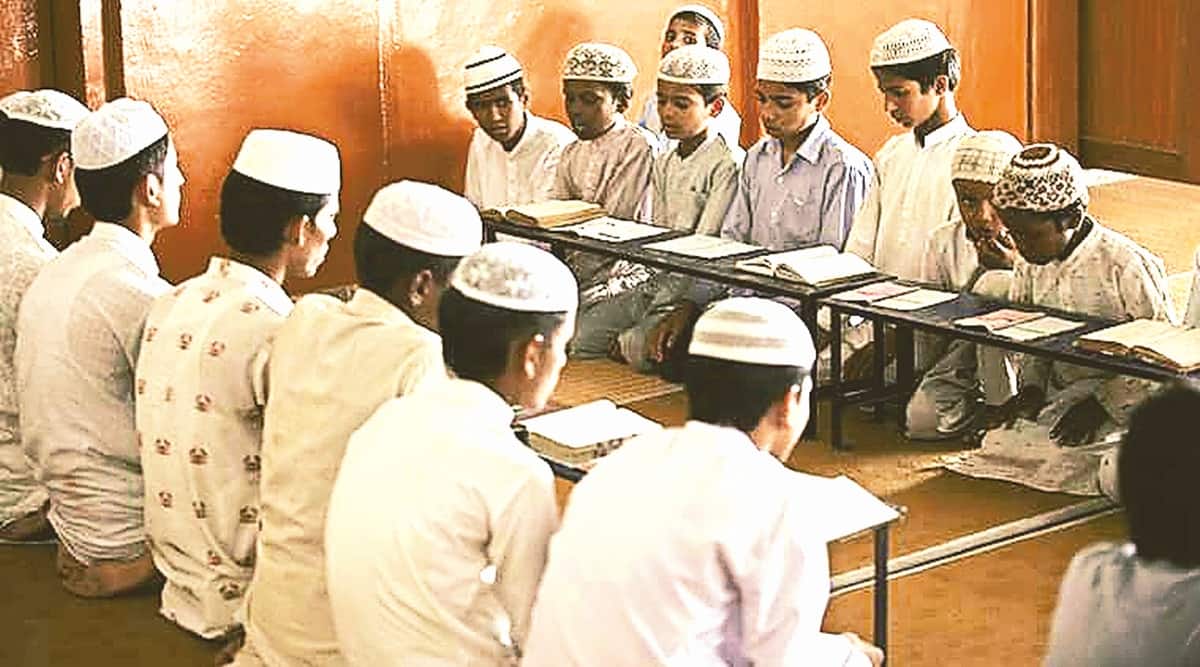 AFTER CONDUCTING a nationwide assessment of minority schools, the National Commission of Protection of Child Rights (NCPCR) has recommended to the government to bring all such schools, including madarasas, under the purview of Right to Education and Sarva Shiksha Abhiyan campaign.

The NCPCR also backed reservation for students from minority communities in such schools after its survey found a large proportion of non-minority students studying there.

The report titled “Impact of Exemption under Article 15 (5) with regards to Article 21A of the Constitution of India on Education of Minority Communities’’ states that it was also found that the largest number of out-of-school children – at 1.1 crore – belonged to the Muslim community.

“The aim of the study was to assess how the 93rd Amendment, which exempts minority institutions from the otherwise mandatory provisions of Right to Education, has affected children belonging to minority communities and whether there has been a gap,” NCPCR Chairperson Priyank Kanoongo told The Indian Express.

“We have looked at minority institutions per se and madrasas in particular. We have some startling findings, including that 74 per cent of students studying in Christian missionary schools do not belong to the minority community,” he said.

“Many schools, we know, have registered as minority institutions, simply because they don’t have to implement RTE. But can Article 30, which ensures the right of minorities to open their own institutions for cultural linguistic and religious protection, contravene what is in Article 21(A) which protects a child’s fundamental right to education. Surely Article 21 (A) must prevail,’’ Kanoongo.

“This exemption needs to be reviewed,” he said, adding that it deprives education in these institutions to underprivileged children from minority communities. “Through the report, the Commission has recommended to the government that Right to Education and Sarva Shiksha Abhiyan be extended to all minority schools, including madrasas.”

According to the NCPCR, the Sachar Committee report, which says 4 per cent of Muslim children (15.3 lakh) attend madrasas, has only taken into account the registered madrasas.

The NCPCR report says that the syllabi of madrasas, that has evolved over centuries, are not uniform, and that “being left ignorant of the world around them, many students develop inferiority complex, being alienated from the rest of society and unable to adjust with the environment”. It also says that madrasas do not have any teachers training programmes.

The report traces the establishment of minority education institutions to the colonial policy of divide and rule. “Minority schools established before 1947 can be traced to the Divide and Rule policy adopted by the Britishers under which they tried to divide people on the basis of economic, religious, social and political differences,” it says. “It was introduced by the 17th Viceroy when he gave provision of separate electorates to create a rift between Hindus and Muslims, thus promoting communal disharmony, as part of the Indian Councils Act 1909 (commonly called the Morley Minto Reforms).”

It also says there was a surge in the number of schools securing Minority Status Certificate after the 93rd Amendment in 2006, with more than “85% schools of the total schools securing the certificate in the years 2005-2009”. A second surge was seen in 2010-14, after the 2012 Society judgment that made Sections 12(1)(c) and 18(3) of the RTE Act, 2009 inapplicable to unaided minority schools. In 2014, the Pramati judgment made the whole of RTE Act inapplicable to minority schools.

The report also gives examples of disproportionate numbers. “For instance, in West Bengal, 92.47% of the minority population is of Muslims and 2.47% are Christians. On the contrary, there are 114 Christian minority schools and only two schools with Muslim minority status,” it says. “Similarly, in Uttar Pradesh, though the Christian population is less than 1% there are 197 Christian minority schools in the state. This disproportionate number takes away the core objective of establishing minority educational institutions.”

“Despite the large presence of minority students in school-going age groups, minority schools are catering to less than 8%
of the minority children population. Hence, there is a need to lay down specific guidelines regarding the minimum percentage of students from the minority community to be admitted to the institution,” it says.