Inspired by ideas of Nobel winners Banerjee & Duflo, they bring the govt and schools on the same page. 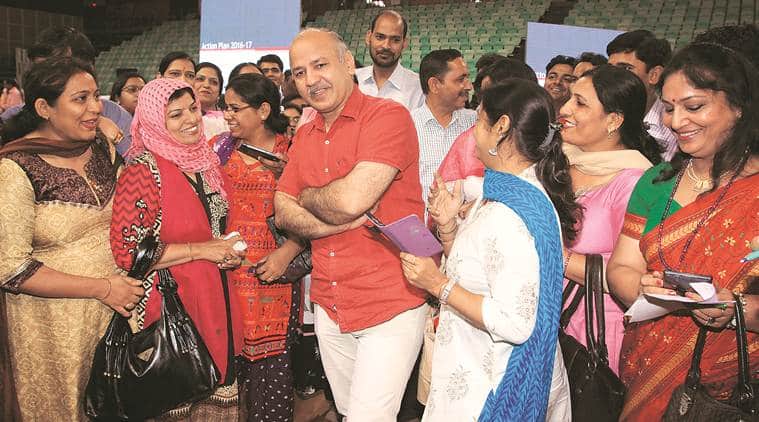 “The best way to describe me would be a facilitator or a bridge,” says Kadmbari Lohiya who is part of Delhi Government’s extensive programme to change how teachers teach and students learn at state-sponsored schools. Lohiya is a mentor teacher, one of 200, who is responsible for six schools. Over the past four and a half years, these teachers have been instrumental in the implementation of the government’s most challenging and controversial programme — Chunauti (challenge) — whose name itself signifies the kind of task it was supposed to be.

In 2015, when the Aam Aadmi Party came back to power after a 49-day stint in 2013-14, senior leaders, consultants and officials of the education department, including the deputy chief minister and education minister Manish Sisodia sat down to study a model to improve learning levels among government school children. Nobel laureates Esther Duflo and Abhijit Banerjee along with their team at the Abdul Latif Jameel Poverty Action Lab had been studying the impact of targeted programmes such as NGO Pratham’s ‘Teaching at the Right Level’. Both met Sisodia and a team of people working in the education department to discuss the implementation of a version of the scheme in Delhi government schools.

What came out from the discussion was the need to tweak the system to Delhi’s needs and to roll it out in all schools at once, unlike how previous interventions were implemented in Uttar Pradesh and Haryana. While the key feature of the Chunauti programme is to identify those who can read and do mathematics at their grade and those who cannot, Delhi had another need – teachers who can act as a bridge between the government and schools.

A solution from within

The idea to select a teacher from amid the pool was to build confidence and use existing motivated and passionate manpower that already knows the shortcomings of the system. Since mentor teachers are peers to the other teaching staff in schools, they are believed to understand specific implementation challenges better and are expected to bring back honest feedback from schools they supervise.

In April 2016, Sisodia wrote to teachers, asking them to apply for a programme where they would be innovating while also getting national and international exposure. By May, 200 were picked from 1,100 applicants.

“For the beginning, the government was convinced that Chunauti will be rolled out across all schools. The next question was that of implementation. A decision was made to train teachers from within the existing pool to act as mentors giving academic support. Changes in pedagogy, curriculum and methods had to be made and it was decided that the mentor teacher approach was best,” said Jasmine Shah, vice-chairperson, Dialogue and Development Commission.

These teachers were then sent for leadership, innovation, teaching and pedagogy training to several places, including Singapore, Mumbai and Bangalore.

Under the programme, a mentor teacher had five to six schools under her supervision. She/he goes to each school once a week to interact with the staff and students. The job is to make sure that the government’s directions are being followed and also to bring feedback to the government.

“When Chunauti started, it was an idea at a nascent stage. It grew and evolved with us. We took the government’s idea to schools and took their feedback to the government. We work on the happiness curriculum, entrepreneurship curriculum, class observation, teacher development, coordination with principals and with School Management Committees (SMC),” Lohiya said.

Data suggests that Chunauti led to a considerable improvement in learning and numeracy. In 2018, for classes VI to IX, 48% children were reading at their level. This rose to 63% after the intervention. In mathematics, 56% students were solving problems at their grade level. This rose to 73%.

Three years down the line, mentor teachers are now involved in the implementation of other programmes at schools including the Happiness and Entrepreneurship curricula at schools. They are also involved in the day-to-day functioning of schools such as SMC meetings.

Lohiya recalls how she realised several children were missing school during the festive season. “We wanted those in classes X and XII to show up for sure… We called a meeting of the SMC and asked the members, who were parents and from the community to reach out to kids and ensure they are in school. As soon as members from the community got involved, we saw a jump in attendance figures,” she says