Without any spectators due to Covid restrictions, the silence inside the giant, empty arenas provides a strange background score. 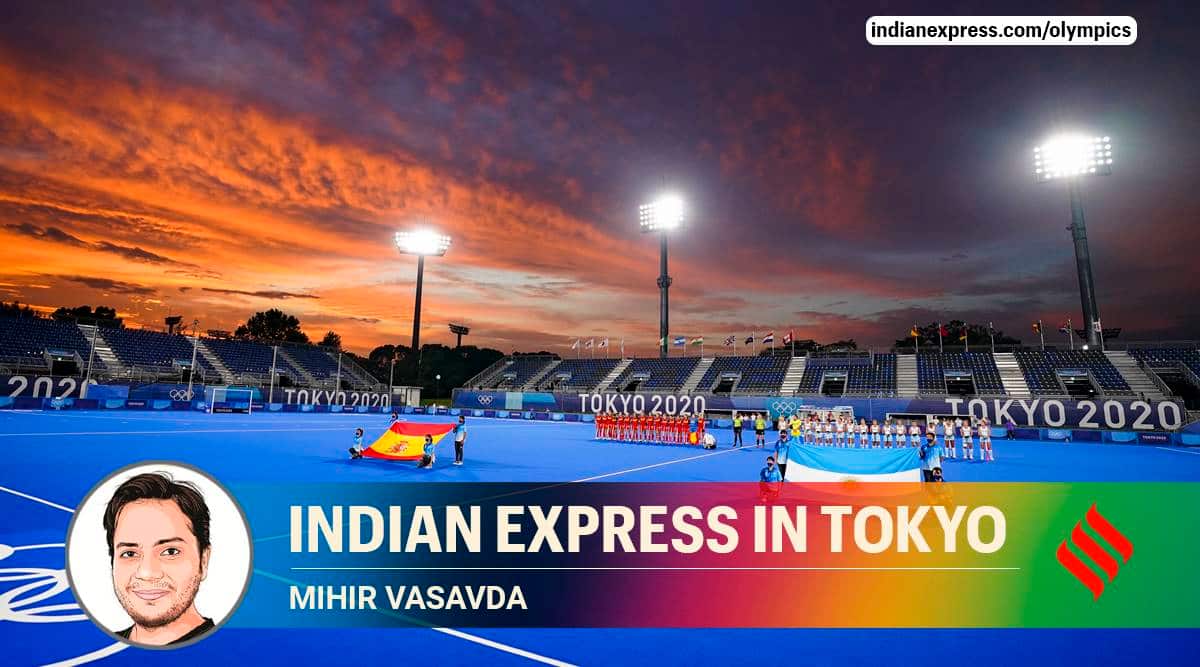 The Australian hockey midfielder, Flynn Ogilvie, picks the ball near the half-line and with a sudden burst of speed, weaves past four Indian players. Just as he is about to shoot, there is a sound of crumpling plastic from outside the playing area. It can be heard around the stadium.

Welcome to the eerie world of the Tokyo Olympics.

Without any spectators due to Covid restrictions, the silence inside the giant, empty arenas provides a strange background score.

At swimming, you can hear the sound of water splashing with every stroke, even at a distance. There is a smattering of applause occasionally but it is hard to say if it’s from the volunteers or the fake crowd noise that is, at times, employed.

When Tokyo presented its stadiums to the world, this wasn’t what anyone had imagined. They had built spaceships, not stadiums. Some, like the volleyball or the hockey venues, are so massive that there are carts and bikes to ferry fans from security checkpoints to the gates. From there, robots would have guided them to their seats. There are rooms to “keep your feelings calm and relaxed”, and volunteers who are ready to help “if you begin to feel worse”.

But the best-laid plans had to be compromised after the city was hit by the fifth wave of the pandemic. Now, the shrill echoes of players and their coaches reverberate around the arena.

The souvenir shops, cafeterias and other amusement facilities have been non-starters as an army of volunteers, brought in to manage hundreds of thousands that were supposed to walk past the gates daily, goes about its business as if stadiums are teeming with people.

Inside a deserted Ariake Tennis Park, Kunihika Iwasa, a volunteer, holds up a pictogram, reminding people to remain socially distanced. He’s been standing under the piercing sun for almost four hours, but it’s still one less than the volunteer at the Asaka Shooting Range who has been driving an empty cart around.

“This was the role I was assigned when my application to become a volunteer was accepted,” Iwasa says. “So I must do it, no matter what.”

Life outside the Olympics bubble is subdued, too.

In fact, the most thrilling incident on Tokyo’s streets since the Olympics began took place at around 3.30 am on Sunday when sirens started wailing in Shinjuku, the city’s entertainment hub, and almost half-a-dozen police cars zoomed through the narrow lanes. But when the sun rose, silence had gripped the streets again.

It’s not as if the city hasn’t warmed up to the Games. After the initial opposition, the sentiment has turned dramatically as Japanese athletes begin their assault on the medals table. A Nikkei poll on Monday revealed that almost 70 per cent of Japanese who were surveyed wanted the Games to go ahead.

On Monday, young fans lined up outside the Ariake Urban Sports Park, trying to get a glimpse of 13-year-old Japanese girl Momiji Nishiya, who won the skateboarding gold medal. Snubbed by the security guards, they waited at the exit holding their skateboards aloft.

The volunteers, meanwhile, are doubling up as cheerleaders as well. The other night, as the New Zealand hockey team entered the stadium, a dozen volunteers stood in a semicircle and welcomed them, clapping and chanting. And when the Indians stepped off the pitch, they were there again to commiserate and wish them luck.

“It would have been nice to have some fans but it’s not like we aren’t used to playing like this,” says India hockey coach Graham Reid.

“Actually, this is how the World Championships look like. We have some athletes and coaches in the audience. So, I didn’t feel too much of a difference,” says Bhavani Devi, the first fencer from India to make it to the Olympics. “Maybe if we had an audience, it would have felt different.”

Maybe, when the track and field events begin, the strangeness of it all might sink in. Especially the 100m final, where the build-up is tense — a long hush followed by a sudden, deafening roar. There won’t be any of that when the world’s fastest sprinters line up later this week. You could hear the plastic crumple, though.