Last time, Modi had invited the SAARC leaders, and then Pakistan Prime Minister Nawaz Sharif's attendance had raised hopes of a new beginning in the bilateral ties. This time, SAARC's exclusion is clearly aimed at keeping Pakistan out of New Delhi's engagement with its neighbours. 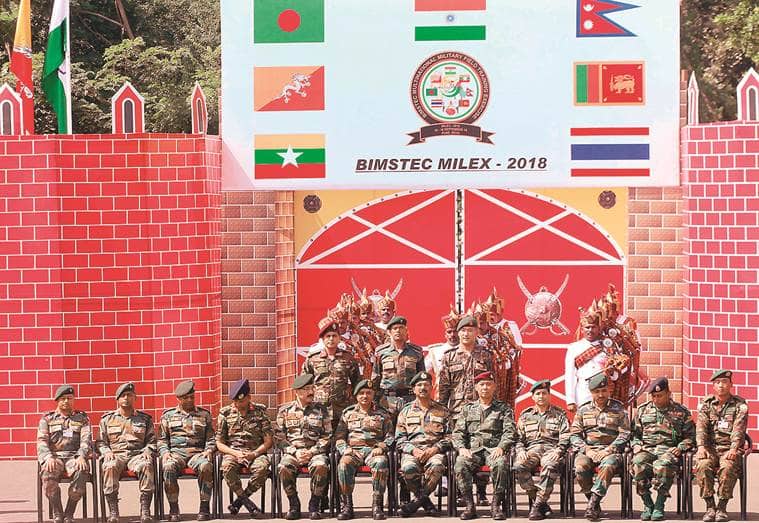 By inviting leaders from the BIMSTEC (Bay of Bengal Initiative for Multi-Sectoral Technical and Economic Cooperation) countries, Kyrgyz Republic and Mauritius at his swearing-in ceremony on May 30, Prime Minister Narendra Modi has made a carefully calibrated diplomatic move that signals a major outreach to India’s neighbourhood from the Bay of Bengal to Central Asia, as well as the Indian diaspora across the world.

Last time, Modi had invited the SAARC leaders, and then Pakistan Prime Minister Nawaz Sharif’s attendance had raised hopes of a new beginning in the bilateral ties. This time, SAARC’s exclusion is clearly aimed at keeping Pakistan out of New Delhi’s engagement with its neighbours.

Who are invited, why

By inviting the leader from Kyrgyz Republic, India is displaying an outreach to the Shanghai Cooperation Organisation (SCO), which is headed by the Kyrgyz leader, and which has China, Russia, Uzbekistan, Kazakhstan, Tajikistan and Pakistan as members. India, which became a member along with Pakistan in 2017, wants to leverage its membership to advance its strategic objectives — counter-terrorism and connectivity.

And Mauritius Prime Minister Pravind Jugnauth, who was also the chief guest at the Pravasi Bharatiya Divas in January this year, is one of the most well-placed People of Indian Origin in the world. Since Modi has invested diplomatic capital in outreach to the Indian diaspora since 2014, this invite is seen as a natural choice.

The key message, however, is the outreach to BIMSTEC, which includes Bangladesh, Myanmar, Sri Lanka, Thailand, Nepal and Bhutan, besides India.

From SAARC to BIMSTEC

New Delhi’s engagement with BIMSTEC rose from the ashes of SAARC. In October 2016, following the Uri attack, India gave a renewed push for the grouping that had existed for almost two decades but been largely ignored. Alongside the BRICS summit in Goa, Modi hosted an outreach summit with BIMSTEC leaders.

That September, some of these BIMSTEC countries had supported New Delhi’s call for a boycott of the SAARC summit scheduled in Islamabad in November 2016. As the summit was postponed, India had claimed victory in isolating Pakistan, having accused that country of carrying out the Uri attack.

Suddenly, BIMSTEC had emerged as a regional platform where five SAARC countries could gather and discuss sub-regional cooperation. India had long felt that the vast potential of SAARC was being under-utilised and opportunities were being lost due to either a lack of response and/or an obstructionist approach from Pakistan.

The search for an alternative, in fact, had been evident at the 2014 SAARC summit in Kathmandu, where Modi had said opportunities must be realised “through SAARC or outside it” and “among us all or some of us.” That was an important signal to Pakistan, as well as to fellow SAARC members.

“As former Indian ambassador to Myanmar Rajiv Bhatia once noted that BIMSTEC was at risk of being little more than a ‘rebound relationship’ whenever New Delhi fails to pursue regional integration SAARC,” Constantino Xavier, fellow at Brookings India, wrote in a paper in February 2018 for Carnegie India.

Joyeeta Bhattacharjee, Senior Fellow with ORF, however, wrote in a paper in January 2018: “Since the SAARC summit has only been postponed, not cancelled, the possibility of revival remains. The success of BIMSTEC does not render SAARC pointless; it only adds a new chapter in regional cooperation in South Asia.”

Two years after the BRICS-BIMSTEC outreach summit and the BIMSTEC leaders’ retreat, the fourth BIMSTEC summit was held in Kathmandu in September 2018. The outcome was considered quite comprehensive, spanning from blue economy to counter-terrorism, although it was only the fourth summit in 21 years.

Why the region matters

The Bay of Bengal is the largest bay in the world. Over one-fifth (22%) of the world’s population live in the seven countries around it, and they have a combined GDP close to $2.7 trillion.

Despite economic challenges, all these seven countries have been able to sustain average annual rates of economic growth between 3.4% and 7.5% from 2012 to 2016. The Bay also has vast untapped natural resources. One-fourth of the world’s traded goods cross the Bay every year.

In an effort to integrate the region, the grouping was formed in 1997, originally with Bangladesh, India, Sri Lanka and Thailand, and later included Myanmar, Nepal and Bhutan. BIMSTEC, which now includes five countries from South Asia and two from ASEAN, is a bridge between South Asia and Southeast Asia. It includes all the major countries of South Asia, except Maldives, Afghanistan and Pakistan.

Arguing on “Prospects for a Bay of Bengal community”, scholar V Suryanarayan, wrote in Seminar in 2000 that few people in India are conscious of the fact that Phuket in Thailand is only 273 nautical miles from Indira Point, which is less than the distance between Chennai and Madurai.

As the region’s largest economy, India has a lot at stake. In the 20th anniversary speech in 2017, Modi said BIMSTEC connects not only South and Southeast Asia, but also the ecologies of the Great Himalayas and the Bay of Bengal. “For India, it is a natural platform to fulfil our key foreign policy priorities of ‘Neighborhood First’ and ‘Act East’,” he said.

For New Delhi, one key reason for engagement is in the vast potential that is unlocked with stronger connectivity. Almost 300 million people, or roughly one-quarter of India’s population, live in the four coastal states adjacent to the Bay of Bengal (Andhra Pradesh, Orissa, Tamil Nadu, and West Bengal). And, about 45 million people, who live in landlocked Northeastern states, will have the opportunity to connect via the Bay of Bengal to Bangladesh, Myanmar and Thailand, opening up possibilities in terms of development.

From the strategic perspective, the Bay of Bengal, a funnel to the Malacca straits, has emerged a key theatre for an increasingly assertive China in maintaining its access route to the Indian Ocean. Beijing has undertaken massive drive to finance and develop infrastructure in South and Southeast Asia through the Belt and Road Initiative in almost all BIMSTEC countries, except Bhutan and India.

As China mounts assertive activities in the Bay of Bengal region, with increased submarine movement and ship visits in the Indian Ocean, it is in India’s interest to consolidate its internal engagement among the BIMSTEC countries.