Jhunjhunwala holds a stake in more than 30 listed firms. 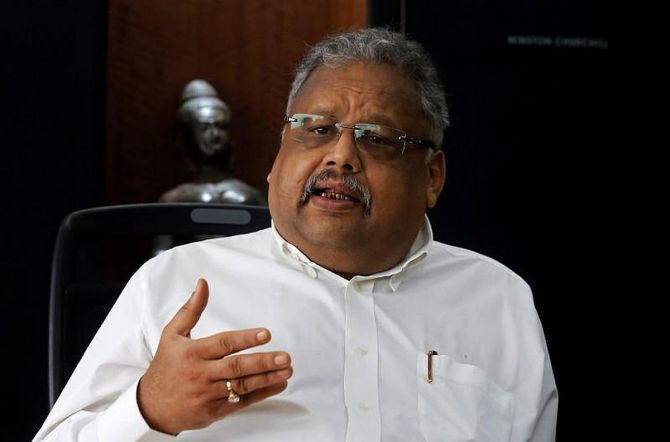 Investor Rakesh Jhunjhunwala, known for spotting multi-baggers, has increased stakes in two firms and offloaded in one, the latest available shareholding data for the October-December quarter (Q3) shows.

His name figured as a minority shareholder in Tata Communications.

Jhunjhunwala, known as the Big Bull who invests both in his name and that of his wife, Rekha Jhunjhunwala, picked up a stake in Tata Communications during the third quarter.

According to the latest shareholding filed by the company, Rekha Jhunjhunwala held a 1.12 per cent stake, or 3.2 million shares, in Tata Communications at the end of Q3.

As of September, her name did not appear among the shareholders.

Firms are mandated to post the names of shareholders having 1 per cent or more in them.

These firms are yet to report their shareholding patterns for the December quarter.

Besides this, the ace investor also picked up shares in Jubilant Life Sciences despite its underperformance vis-a-vis the Nifty during Q3.

Jhunjhunwala hiked his stake to 5.82 per cent from 5.74 per cent at the end of the September quarter.

Shares of the pharma firm have risen 15.58 per cent in October-December as against a 24.30 per cent rise in the Nifty.

Analysts at Nirmal Bang see single-digit growth in specialty revenues on improvement in contract manufacturing and the life sciences business.

The brokerage maintained its FY21, FY22 and FY23 estimates, but expects earnings to flatten in FY23 because the benefits driven by the pandemic will by then taper off.

Jhunjhunwala more than halved his holding in FSL to 1.29 per cent in Q3 from 2.88 per cent in the September quarter.

The nearly 40 per cent rally in the shares in the October-December quarter and 393 per cent since the March low of Rs 20.10, could be a key reason for the stake sale.

Anand Rathi in its Q3 earnings preview said it expected another quarter of revenue surprise from the company.

“The mortgage business continues to do well and margins are likely to benefit from revenue growth and the strong British pound tailwind,” it said.

Jhunjhunwala holds a stake in more than 30 listed firms.