Such was the terror created by the ATS, that all their relatives stayed away.

Iqbal Ahmed’s son was six months old when Ahmed, an employee with a mobile network distributor in Parbhani, was arrested for alleged links with the Islamic State.

Though his wife would bring the infant to the Aurangabad jail whenever she visited him — which wasn’t too often as it entailed a 200 km journey — it was three years before Ahmed could hold his son for the first time, when he was brought to court.

The child didn’t recognise his father.

That infant is now a five-year-old school boy, and Ahmed can’t wait to meet him. Out on bail since August 13, he got permission from court on August 24 to go home for two days. On the morning of August 27, he was back in time to present himself before the National Investigation Agency in Mumbai.

Ahmed’s father Shaikh Kabir, hopes that the court will then allow his eldest son to come home, though he knows life will never go back to what it was.

Four Parbhani residents were arrested in 2016 by the Maharashtra anti-terrorist squad, on the allegation of having links with Islamic State and conspiring to commit terrorist acts. They were charged under the UAPA and the Explosives Substances Act.

Naserbin Abubaker Yafai Chaus, a contractor, and Mohammed Shahed Khan, who, like Ahmed, also worked for a mobile network distributor, had already been arrested when Ahmed was arrested on August 7, 2016; school teacher Raisuddin Siddiqui was arrested later.

Before his arrest, recalls Ahmed, the ATS had summoned him thrice in Aurangabad and Parbhani. They wanted information about the other two accused.

Ahmed told them that he used to sometimes eat at Chaus’s restaurant, and on the latter’s request, recharge his phone. He knew Khan because they both worked in the same field, Ahmed told Rediff.com‘s Senior Contributor Jyoti Punwani

“But,” he added, “I told them (the NIA) I knew nothing about whatever they were alleging.”

According to the ATS, the four men were planning to join IS. The specific evidence against Ahmed was on three points:

Granting Ahmed bail, Justices S S Shinde and N J Jamadar said none of this material was of a quality that could ‘sustain a reasonable belief’ that the accusation against Ahmed was true.

On the first allegation regarding his support for a co-accused’s pro-IS views, the judges, agreeing with senior advocate Mihir Desai that the statements attributed to Ahmed were in ‘the realm of discussion’, concluded that there was “no prima facie evidence that Ahmed had instigated the commission of an offence’ or advocated violence.

Regarding the second point, the judges pointed out that according to the prosecution, accused Naser Chaus had told the ATS that such oath of allegiance forms were distributed to many. Moreover, the contents of the form were not in Ahmed’s handwriting.

‘The mere possession of such oath form, without subscribing thereto, prima facie, does not appear to be an incriminating circumstance,’ says the order.

On the third allegation, the judges pointed out that nothing incriminating had been found in Ahmed’s house that could be related to preparation of an IED. Moreover, the ATS had not received sanction to charge Ahmed under the Explosives Substances Act, and that charge had been removed.

Additionally, the judges accepted advocate Mihir Desai’s argument that Ahmed had already spent five years in jail as an undertrial. Charges were framed four-and-a-half years after his arrest; and the trial was not expected to start any time soon, given that the special NIA judge had 225 cases on his file.

‘The further incarceration of the appellant, in the face of extremely unlikely situation of the trial being completed in near future, would be in negation of the protection of life and personal liberty under Article 21,’ the judges ruled.

‘The denial of bail, in such circumstances would render the procedure not only unreasonable but unconscionable as well,’ said the judges.

‘The appellant is entitled to be released on bail on merits and on the ground of prolonged incarceration, which infringes his right to life and personal liberty,’ says the order. 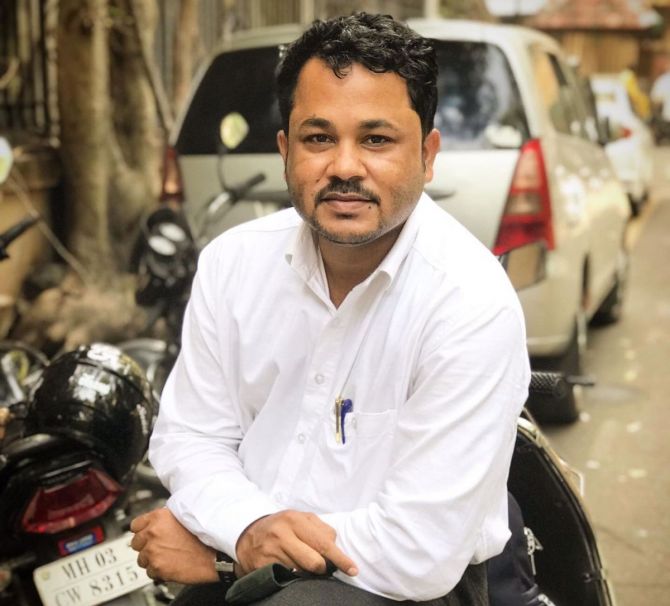 The five years in jail were hard enough for Ahmed — the four accused were put in the isolated Anda Cell reserved for alleged Naxalites and terrorists — but for his family, they were hellish.

“We had never imagined such a thing would befall us,” said his father in a rush of words. “Until then, we’d never even had to interact with the police.”

“We were shattered,” he continued. “It took me some time to convince myself and everyone else that whatever happened had happened, now we have to look ahead and get our son out.”

Such was the terror created by the ATS, recalled Ahmed’s father, that all their relatives stayed away. After Ahmed’s release, they resumed contact, but said Shaikh: “What’s the use now? When we needed them, they weren’t around.”

The Jamiat Ulama in Mumbai provided Ahmed legal aid, as they have to many poor Muslims who they feel have been falsely accused of terror, after studying the charges and evidence against them.

For Shaikh, advocate Shahid Nadeem, who is part of the Maharashtra Jamiat’s legal cell, is the reason his family could survive the five-year-ordeal.

“He promised he would get my son out, he encouraged me not to lose hope, he gave me moral support when my daughter was hospitalised. And he kept his word. I haven’t had to spend a paisa on lawyers.”

Shaikh used to work in a readymade garments store, but the running around necessary for his son’s case forced him to leave his job. It was left to Shaikh’s younger son to earn for the family.

Shaikh would attend every hearing and regularly meet Ahmed’s lawyers in Mumbai. Advocates Sharif Shaikh and Kritika Aggarwal argued the case in the trial court and successfully prevented the ATS from charging Ahmed with the Explosives Substances Act since the competent authority had not issued sanction under the Act to prosecute him, a fact also noted by the high court in its bail order. Senior advocate Mihir Desai argued the bail application in the high court.

The day Iqbal Ahmed was released, father and son spent the day expressing their gratitude: First offering a thanksgiving namaz at the masjid and then heading for the Jamiat Ulama office where Gulzar Azmi, general secretary of the Maharashtra unit, offered them sweets.

Forced to live in Mumbai for three months, Ahmed is looking for work to be able to sustain himself.