In spite of the deployment of specially trained counter forces, the government has not been able to force the Maoists to come to the negotiation tables.

The loss of 22 security personnel, 30 injured and one missing in operations in the Bijapur-Sukma areas of Chhattisgarh on April 3-4 is a reminder that we need to take a relook at our counter-Maoist strategy.

Winston Churchill, in spite of his brief career in the armed forces, was not a master strategist, but he knew whom to choose to lead men in war.

Jawaharlal Nehru failed to identify a leader who could achieve the political objectives of war in 1962 and the nation was humiliated.

Similarly, counterinsurgency is fought by the political and security forces leaders in the cognitive domain and if either of them fail, the men will pay the price of incompetence of their leaders.

If this anomaly is not rectified soon, the losses in future will be much greater. 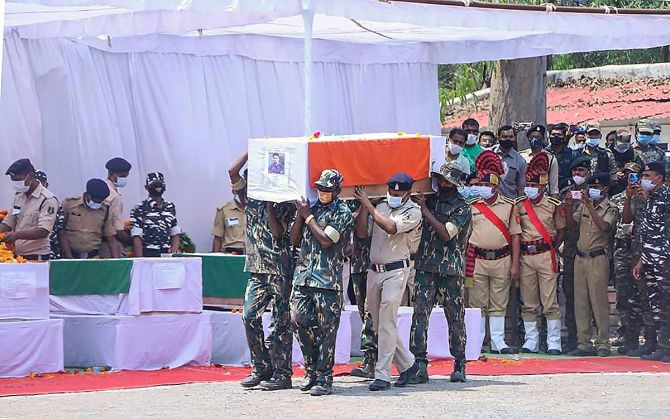 The incident has highlighted many aspects of how not to conduct counter-insurgency operations. The commander controlling operations had little situational awareness.

As per media reports, the bodies of the missing security personnel could be recovered only 24 hours after the incident. Medical evacuation was delayed beyond the golden period because the number of casualties and locations were probably unknown.

While planning such a large operation where 1,500 to 2,000 men are launched in operation, there is a necessity of having reserves for any contingencies, but in this case all basic principles of operations appear to have been compromised.

Timely reinforcement could have saved the loss of lives and loss of weapons and war-like stores.

The conceptual questions are:
Wwhat are the operational directive to the men on ground?
What are the political objective and national interests they are required to achieve?

There has to be a serious commitment for men to go willingly, not as a cannon fodder or sacrificial lambs, but with a determination to succeed in their campaign. It cannot be just security of their camps and prevention of incidents in their areas of operation.

The men and officers must have objectives and the junoon to outwit the Maoists even at grave threat to their lives. 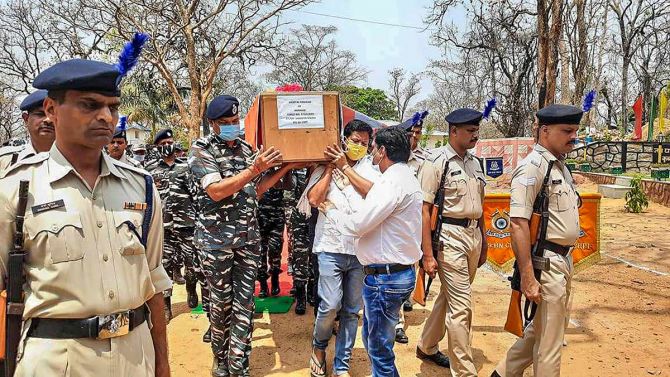 Counter Maoist operations have been going on now for decades, but the big question is: Have we created a ‘bargaining leverage’ that compels the insurgents to negotiate without pre-conditions?

Friction of their cadres and leadership must be so high that people no more ally themselves with the objectives of People’s War. This would require a robust counter Maoist operational strategy, precise intelligence to sever the supply of weapons, ammunition, communication and logistic support to the Maoists.

A resilient war of perception and a robust administration for deliverance of governance is a must to consolidate counter-insurgency efforts.

A fractured approach and a switch on switch off strategy will always deliver reversals.

Have we decoded how the Maoists get their huge supply of small arms ammunition for SLRs and LMGs produced by the Ordinance Factory Board?

Who are the conduits of this ammunition supply?

Is it coming from across the border or through the maritime route?

What are we doing to dry up this pipeline?

These are some important questions that need answers urgently.

When the insurgents start dominating the public discourse, the security forces must wrest initiative from the insurgents. The other organs of the State will join counter-insurgency efforts once some degree of dominance is achieved over the insurgents.

All these issues require leaders who will lead from the front and direct operations on the ground. Control of the population and monitoring of over ground workers is as much essential as tactical operations.

The insurgents will start getting impatient when their logistical support start drying up and public support dwindles. That is the time when they will emerge from their safe havens. Thus, chasing them in their strong points (inside jungles) is an unwarranted and flawed strategy.

Running after quick and tactical successes is a bad practice. It is a game of wits and patience. Thus, the right approach is to penetrate, consolidate and then create series of strong points to restrict the freedom of movement of the Maoists.

Use of drones to gain information on the movement of the insurgents and terrain is vital since men cannot be asked to plunge in the darkness.

Achieving tactical success is essential to restore the morale of men and wresting initiative from the insurgents.

If kinetic operations fail to cause friction among Maoist cadres and their leadership, excesses against the tribals will be disastrous. Such immature and unprofessional acts by the security forces are unlikely to yield any positive results.

Commanders must ask men to be calm and not display anger against innocent people.

It is true that organisational losses to the Maoists should be high enough to force them to come to the negotiating table with the government, but one must remember that counter-insurgency efforts cannot be achieved through the barrel of the gun alone.

There is a need to understand that the Maoists have always gained from the first strike and security forces have always found themselves either reacting or carrying out jungle bashing to produce results from thin air.

The best strategy is when the higher leadership of the security forces is able to create conditions for men on the ground to succeed by deploying technology, precise intelligence and well trained sub-units competent enough to operate in small teams.

In the light of the above facts, it is unwise to enter jungles with a large body of troops without precise intelligence.

In the heat of anger or revenge, security forces must not forget the ‘winning hearts and minds’ strategy.

Counter-insurgency operations are all about intellect and working from the grassroot level upwards and not for those who are parachuted from the top.

It is not adventure tourism. Only those who have spent days leading men in ambushes are competent enough to lead the forces, not those who hide behind SOPs and political clout.

There has to be accountability. Someone must pay for the loss of lives of men who became victims of collective incompetence of those at the helm of affairs of internal security. 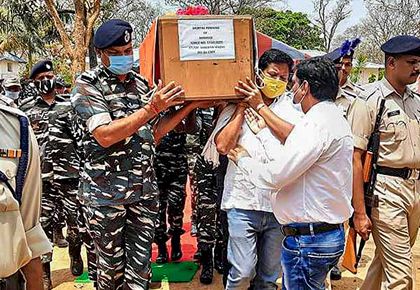