Larry Chen started his career as a middle-school teacher before joining New Oriental Education & Technology Group Inc. in 1999 and eventually becoming executive president. He left to start GSX in 2014. 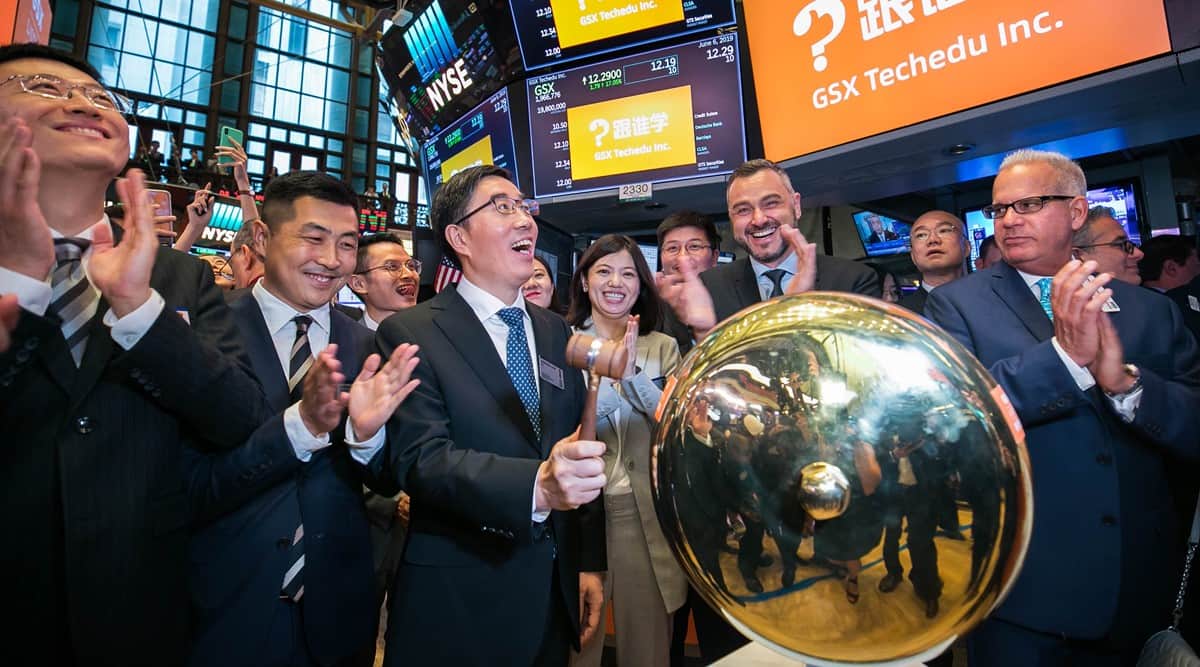 Larry Chen, the former school teacher from a poor Chinese village who became one of the world’s richest people, is closing in on losing his billionaire status as shares in his online-education business slump.

GSX Techedu Inc. fell 4% in New York trading Wednesday after Goldman Sachs Group Inc. downgraded the stock and slashed its price target. The shares have plunged 88% since late January, wiping almost $14 billion from Chen’s fortune and leaving him a net worth of about $1.9 billion, according to the Bloomberg Billionaires Index.

The Chinese firm has been buffeted by a range of issues, including the country’s crackdown on the online-education sector, a weaker-than-expected results outlook and the implosion of an investor, Bill Hwang’s Archegos Capital Management.

“Policy risk is the No. 1 concern right now,” said Tommy Wong, an analyst at China Merchants Securities International Co. based in Hong Kong, who rates the stock a buy.

The Chinese education industry is under increased scrutiny after President Xi Jinping suggested in March that a surge in after-school tutoring was putting immense pressure on China’s kids. The country’s education ministry plans to create a dedicated division to oversee all private education platforms for the first time, people familiar with the matter told Bloomberg.

GSX is shutting its pre-school education business for children ages 3 to 8 in response to regulations banning kindergarten and private-tutoring schools from teaching the elementary school curriculum, spokeswoman Sandy Qin said this week.

The company is laying off employees as a result, Qin said, while declining to say how many people are losing their jobs. Chinese media reported earlier that the company is cutting almost a third of its staff.

In April, GSX was among four private education providers fined the maximum penalty of 500,000 yuan ($78,356) for using false or misleading prices to lure customers.

It’s a major headache for Chen, who owns about 44% of GSX, at a time when his company’s shares were already being hit by a weaker-than-expected outlook. In late May, GSX gave a second-quarter revenue forecast that missed the average analyst estimate. Its shares tumbled.

And in March, one of the outside investors with the largest exposure to the firm, Hwang’s Archegos, imploded when it failed to meet margin calls.

Hwang’s family office had built highly leveraged positions in GSX and other firms using swaps. When some of those stocks fell, banks demanded collateral that Hwang was unable to provide, so they offloaded large blocks of GSX and other shares. GSX plunged as much as 56% in one day.

As recently as January, Chen had seen his fortune triple to $15.6 billion in about two weeks as GSX’s shares surged. That was even after the company disclosed in September that it was being investigated by the U.S. Securities and Exchange Commission, and short sellers including Carson Block’s Muddy Waters questioned the firm’s business. Chen started his career as a middle-school teacher before joining New Oriental Education & Technology Group Inc. in 1999 and eventually becoming executive president. He left to start GSX in 2014.

The stock rose more than 13-fold from its debut in 2019 through a Jan. 27 high as revenue surged. But short sellers repeatedly raised questions about the company.

Chen attempted to calm his employees after the Archegos fallout in an internal letter on March 29, according to a Chinese media report. He urged them to ignore short-term market moves and focus on long-term value.

But as the government sets stricter rules to regulate the industry, even GSX bulls are reconsidering what that value might be.

“We see slower revenue growth but with better profitability to be the long-term business model, versus growth at any cost in the past,” China Merchants Securities’ Wong said.