Mrs Vasantha V K Reddy will be on the flight from Bengaluru to New Delhi today. On Thursday morning, she will be seated among the guests on Kartavyapath to watch her only child Squadron Leader Sindhu Reddy lead the Indian Air Force’s marching contingent at the Republic Day Parade.

“Everyone knows me as the mother of Squadron Leader Sindhu Reddy,” she says brimming with pride over the phone from Bengaluru.

Squadron Leader Reddy is a helicopter pilot in the IAF. She flies the Mi-17, the IAF’s workhorse.

The officer has served in the IAF for nine years during which she has been posted to air force stations in the north east, north and southern India.

“Since I joined the IAF, I have always wanted to lead the Republic Day parade. I am lucky and proud to have finally got the opportunity,” says Squadron Leader Sindhu Reddy over the telephone after the day’s parade practice in New Delhi.

The officer was a member of the IAF’s marching contingent in 2018 as well.

“I was a junior officer then and feel I am more physically fit now. Leading the contingent is indeed a great responsibility. I am full of josh,” she says.

Since her days as an NCC cadet in Bengaluru, Squadron Leader Reddy always enjoyed marching in the parade. The parade is also part of the daily schedule in her unit and she was selected for the Republic Day parade by the adjutant because she excelled at it.

The contingent arrived in Delhi in the first week of December. Squadron Leader Reddy was informed that she was selected as commander of the contingent on January 18.

For the past two months, the marchers wake up very early and report for the practice at 4.30 am in what has been an exceptionally bitter winter.

“We march for 13-14 kilometres every day. The weather has been extremely cold, but our training is such that we got accustomed to it and concentrate more on precision and accuracy of the parade.”

“The focus is on attaining perfection so that the Indian Air Force gets judged as the best marching contingent,” she says. Squadron Leader Reddy is also training her voice to give the robust command as the contingent passes the saluting dais on Kartavyapath.

“I have been coached by instructors on how to train my voice and give the command. It is a challenge, but everyone in helping me,” she says.

It is a long march and understandably, there is a lot going on in the officer’s mind as the commander of the contingent.

“I have the responsibility of motivating and keeping the morale of the entire contingent high,” says Squadron Leader Reddy who will be followed by Flight Lieutenants Ayush Agarwal, Tanuj Malik and Nikhil Pradhan.

“Every step counts and every step has to be perfect.”

Squadron Leader Reddy is the only lady officer in the 144-member IAF contingent. The rest of the contingent consists of young airmen who often ask her about the operations she has undertaken, the helicopters she has flown and how she became an officer. 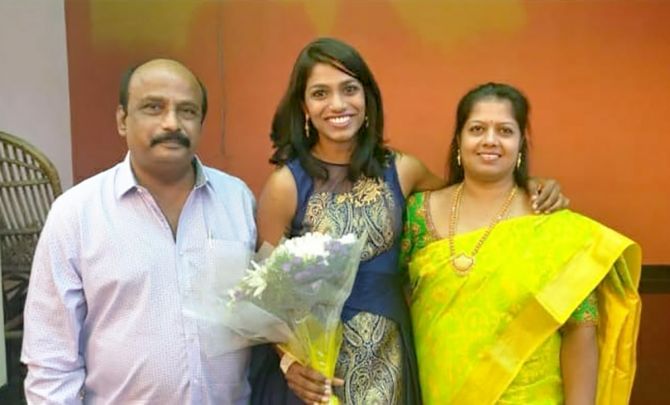 NCC cadets who are part of the National Cadet Corps marching contingent often walk up to Squadron Leader Reddy to ask how she got selected in the IAF, what it is to fly and life in the armed forces.

“I always wanted to fly. My dad always encouraged me and made sure I joined the NCC in college which was a motivating factor,” says the officer who is the first person in her family to join the armed forces.

On the eve of Republic Day, the marchers also have readied their crisp uniform for the ceremony. The uniform has many components and has to be well ironed and polished.

“This is the first parade on Kartavyapath and I am proud to be the contingent commander. The IAF will be taking the best marching trophy home,” says Squadron Leader Reddy who also likes painting, gardening and creating art from waste material.

“She is very talented and extremely disciplined,” says her mother Vasantha Reddy.

Mr and Mrs Reddy have been receiving calls and messages since the news of their daughter leading the IAF’s marching contingent became known.

Family, friends, teachers, the local MLA and the area circle inspector have called expressing their admiration for Squadron Leader Reddy.

“The circle inspector also said they would like to invite her to deliver a talk to inspire youth,” says Mrs Reddy, a former government employee who is now involved in social work.

“She has made us all proud.”