‘We don’t have a plan for the crisis at all. The uncertainty will continue.’

“The election of Ranil Wickremesinghe shows the arrogance of parliamentarians,” human rights lawyer Swasthika Arulingam, a prominent voice of the people’s protest in Colombo, tells Archana Masih/Rediff.com in a telephone conversation from the Sri Lankan capital.

We are extremely disappointed that Ranil Wickremesinghe not only won, but won with a decisive majority.

Our parliamentarians have ignored and rejected the demands of the people which shows the undemocratic nature of the parliament.

The election of Wickremesinghe shows the arrogance and confidence of parliamentarians that whatever happens they can be voted back into power.

It is a limitation of our democracy that the corrupt can be voted back into power when they have a bloated budget to run for office, but I feel it is different this time than what we have seen in the last 40 years.

People are watching parliamentarians very carefully. Hopefully, people will hold them into account for what they have done today.

This gives us further reason to continue our struggle and push for the two constitutional reforms:

1. Abolishing the executive presidency — the root cause of all evil because it makes the president unaccountable to parliament or to anyone.

2. Constituting a people’s assembly which can keep a check on the parliament. We need a body that holds the 225 parliamentarians accountable. With Ranil Wickremesinghe coming to power, we also feel there may be a crackdown on protestors which will be a challenge for us.

He clamped an emergency as acting president. It was declared as a scare tactic for the protestors. Effectively ,it has no validity because there are no emergency regulations.

Wickremesinghe can use his full force as executive president and do what he did in the 1990s like cracking down on peaceful protestors, creating a culture of arrests, forced disappearances.

He is known for all this. He is capable of doing all this and worsening the crisis. His party has overlooked all this in the past and it can happen again.

Mahinda Rajapaksa and son Namal voted in parliament today. The Rajapaksas still have a large hold on Sri Lankan politics and the evil has not left our system yet. 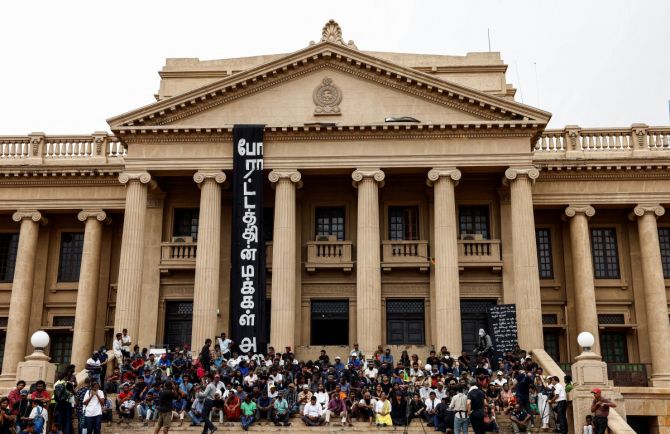 We will continue our struggle and see how to take our demands forward.

We are re-strategising now that Ranil Wickremesinghe is the executive president.

Sri Lanka is already in a rock bottom situation and I don’t think it can go any worse.

We don’t have a plan for food production, fuel distribution, essential medicines, etc.

We don’t have a plan for the crisis at all. The uncertainty will continue.