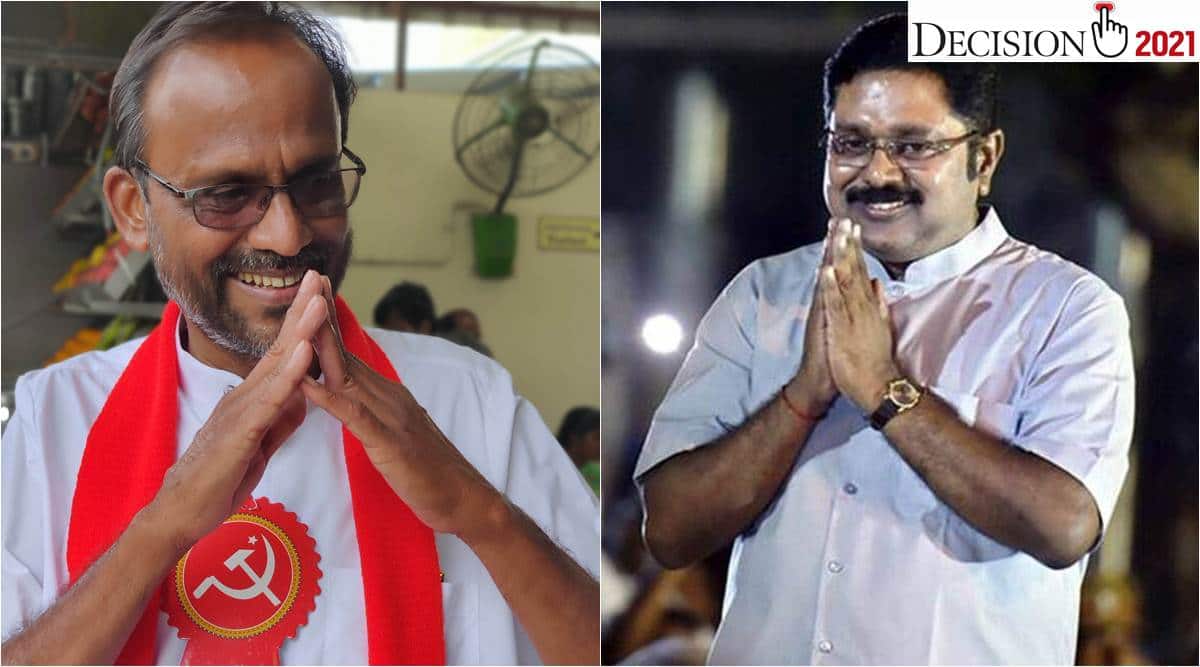 A woman in her 50s selling flowers near the Kovilpatti Vinayagar temple says she has always voted for “MGR katchi (party)”. Until now.

Kovilpatti in southern Tamil Nadu’s Thoothukudi district may be one of the most-watched constituencies in this Assembly election in Tamil Nadu, with AIADMK rebel T T V Dhinakaran — who has a lot more at stake than just this poll win — announcing his candidature from here. Also in the race is powerful AIADMK minister Kadambar Raju. But, this woman voter and several others in Kovilpatti have their eyes on a third candidate — the self-effacing K Srinavasan, contesting on the ticket of the CPM, which is a part of the DMK-led alliance, who has been working here quietly since long.

A fourth contestant, from Kamal Haasan’s MNM, is barely making his presence felt.

Asked about Dhinakaran, the flower-seller, who doesn’t want to be identified, says, “He reached here only last week. Do you think he can make it without any stake in Kovilpatti?”

A committed AIADMK voter, she has also lost faith in the party. “The street where I live hasn’t changed in 20 years. We don’t even have a streetlight. These people have been unable to do anything, especially after Amma (J Jayalalithaa) died. There is a feeling here that change is must. Srinivasan has been working for us for many years… He hasn’t even changed his old cloth bag still,” she says laughing.

Kovilpatti is a dry land largely known for the best kadalai mittai (made of peanut and jaggery) in South India. While it also has several firecracker manufacturing units, as an extension of nearby Sivakasi, its biggest industry is matches, employing over two lakh people.

It is as a leader of the match industry workers, whose jobs are threatened by automation, that Srinivasan first made his mark. He has been a councillor three times and the municipal chairman once. On Monday, the match workers began a strike seeking government help.

Apart from the backing of the DMK, which is confident of a win after 10 years of AIADMK rule, Srinivasan is also assured of a strong Left base in Kovilpatti. The CPI has won this seat seven times. The Congress, also in the DMK alliance, has won three times. However, the last two times, 2011 and 2016, it was Raju who won.

The DMK’s Thoothukudi MP Kanimozhi and MDMK leader Vaiko, who has significant influence among people in Kovilpatti, are among the top leaders campaigning for Srinivasan.

The CPM leader says elections in the constituency are neither about caste nor money — two of the staple factors across Tamil Nadu elections. Kovilpatti is a place of struggles and literature, Srinavasan adds. “You go to any street here, you will find a writer. Be it Madhurakavi Bhaskara Das or Bharathiyar, they all emerged from this land,” he says. Ki Rajnarayanan or Ki. Ra, whose stories capture lives in drought-stricken regions, as well another prominent writer, Cho Dharman, also belong to Kovilpatti.

The land is also rife with stories like that of Veerapandiya Kattabomman, who fought the British as far back as the 18th century. “So do not underestimate Kovilpatti. People cannot be purchased or trapped into mere caste sentiments here,” says Sriniavasan, adding that the large working class population will vote for the DMK alliance.

With a new party to resuscitate, and with a point to prove to AIADMK Chief Minister E Palaniswami and Deputy CM O Panneerselvam, who turned him and aunt Sasikala out of the party in the power struggle after Jayalalithaa’s death, did Dhinakaran overplay his hand in choosing Kovilpatti? Two years back, he had stunned the AIADMK and DMK winning Jayalalithaa’s seat R K Nagar as an Independent.

With Sasikala choosing to “distance” herself from politics just before polls, Dhinakaran has been shouldering the AMMK alone, leaving him busy campaigning in other parts of the state. However, while he is himself yet to begin canvassing in Kovilpatti, his campaign vehicles are the loudest presence here.

Minister Raju, meanwhile, says victory will be his given the “fine work” by the AIADMK government. “Everyone said our government will not survive after Amma’s death. But we are facing the election with a number of promises fulfilled.”

However, Raju himself is facing strong anti-incumbency on account of several controversies, particularly over police excesses. In the Sathankulam custodial deaths of a father and son, Raju was accused of delaying action against police officers and protecting the Thoothukudi SP. A week ago, Raju was booked for threatening a flying poll squad team when they stopped his convoy for a search.