As rooftop class was engulfed, only escape route got cut off; Gujarat govt orders probe 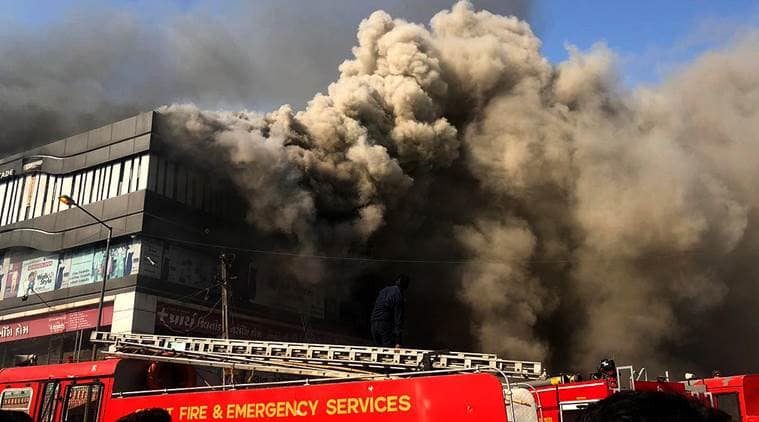 At least 20 students were killed Friday after a massive fire engulfed a three-storey commercial complex in Surat. Some of the students, the youngest aged 4 and the oldest 21, died when they jumped off the building while most could not escape and were killed by the fire.

The fire broke out around 5 pm on the roof of the Takshashila complex, which had covered the terrace to run summer classes for students along with other coaching centres. This space, run by various operators, had a fashion designing class, a class for mental mathematics and a gymnasium among others.

Once the fire started, it quickly enveloped a wooden stairway — the only access to the summer classes on the terrace forcing students to plunge out of windows and the roof. Officials said that those killed in the blaze were aged between 15 and 21 years apart from a four-year-old girl, who is yet to be identified. Of the 20 victims, police have identified 17 bodies.

According to officials, most of the students who did not jump off the building were women who were all killed in the fire. Videos of the fire on television channels or social media showed bystanders shouting helplessly as the students jumped out even as firefighters struggled to control the blaze and reach the stranded students on ladders.

Speaking to the Indian Express, Surat Police Commissioner Satish Sharma said, “There were 35 people present in the various classes on the top floor of the commercial complex (Takshashila) of which 20 died, including a four-year-old”.

“None of the other users of the building, barring the top floor where the classes ran, were affected by the fire.” 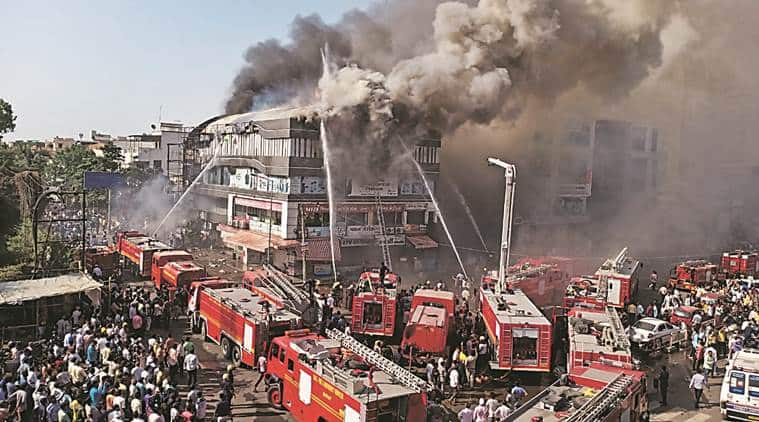 The victims and the injured were taken to the Surat Municipal Institute of Medical Education & Research (SMIMER). SMIMER RMO Dr Jayesh Patel said, “19 dead bodies have arrived at SMIMER. Of these three succumbed to injuries sustained when they jumped from the building to escape the fire and 16 others succumbed to burn injuries. 17 bodies have been identified so far. The police is trying to identify the students, otherwise the hospital will have to conduct DNA tests with the parents of the missing students to confirm their identities.”

The first three floors of the building had shops and offices and top floor which was covered by a dome-like structure ran summer classes teaching fashion designing course, a personality development course and a gymnasium, among other summer camps.

Deputy Commissioner of the Surat Municipal Corporation (SMC), N V Upadhyay said, “The building originally had approval for G+3 structure, a fourth floor was added later after which they applied for impact fee regulation, which was then approved. However, the question remains, how was such a construction approved, and what all parameters were looked into at the time of approval?”

The fire is suspected have started either from an AC compressor or some electrical equipment in the coaching centre, which spread quickly to the wooden stairway – this connected the third floor to the terrace where the class were held. The blaze then spread to the floors below burning down two-wheelers parked around the building before firefighters brought it under control. “The entire wooden stairway leading up to the terrace was burnt down leaving no escape route for the students and thus they began jumping out of the window to escape,” said Sharma.

Prime Minister Narendra Modi tweeted: “Extremely anguished by the fire tragedy in Surat. My thoughts are with bereaved families. May the injured recover quickly. Have asked the Gujarat Government and local authorities to provide all possible assistance to those affected.”