The Guild demanded that there should be a free and fair investigation into the circumstances of the riots instead of “penalising journalists and civil society activists”. 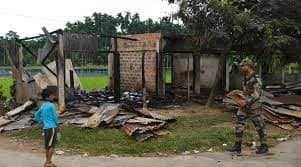 A day after Tripura Police invoked the Unlawful Activities (Prevention) Act (UAPA) against 102 social media handles over clashes and alleged attacks on mosques, the Editors Guild of India said it was shocked by the action initiated against people who were “reporting and writing on the recent communal violence in the state”.

“This [development] comes a few days after the police had filed UAPA charges against some Delhi based lawyers who had visited Tripura as part of an independent fact finding enquiry commission into the communal violence. One of the journalists, Shyam Meera Singh, has alleged that he has been booked under UAPA for merely tweeting ‘Tripura is burning’. This is an extremely disturbing trend where such a harsh law, where in the processes of investigation and bail applications are extremely rigorous and overbearing, is being used for merely reporting on and protesting against communal violence,” the Editors Guild said in a press statement.

It alleged that the move was an “attempt by the state government to deflect attention away from its failure to control majoritarian violence”.

The Guild demanded that there should be a free and fair investigation into the circumstances of the riots instead of “penalising journalists and civil society activists”. It also reiterated its demand to the Supreme Court to take cognisance of the way in which stringent laws like the UAPA are “unjustifiably used against freedom of speech”. It also asked the apex court to issue guidelines on stringent laws under which journalists can be charged so that the legal apparatus cannot be misused for “suppressing freedom”.

Tripura Police have invoked UAPA against 102 social media handles and also asked for them to be blocked for spreading “objectionable news items/ statements” about the recent clashes and alleged attacks on mosques in the state.

Police also asked Twitter for information on the users or administrators of these accounts, who they claimed had posted fake or fabricated photos and statements online that had “potential to flare up communal tension”.