A significant part of the readjustment of boundaries is expected in some of the Assembly seats in Ganderbal, Budgam, Kulgam, Anantnag, Kishtwar, Doda, Ramban, Reasi, Udhampur, Kathua and Samba districts. This is necessary to ensure that a seat falls within one administrative unit, sources said. One of the key focus areas of the ongoing delimitation exercise in Jammu and Kashmir (J&K) would be a dozen districts where the constituency boundaries of some seats stretch beyond a district’s limits, The Indian Express has learnt.

A significant part of the readjustment of boundaries is expected in some of the Assembly seats in Ganderbal, Budgam, Kulgam, Anantnag, Kishtwar, Doda, Ramban, Reasi, Udhampur, Kathua and Samba districts. This is necessary to ensure that a seat falls within one administrative unit, sources said.

For instance, Ganderbal Assembly constituency falls largely within Ganderbal district, but nine polling stations are in territorial control of Srinagar district. The HS Bugh and Devsar seats are partly in Kulgam district and partly in Anantnag. Similarly, Inderwal Assembly segment is spread over Doda and Kishtwar districts.

“Unless there is a natural barrier, one seat should ideally be within the control of one district,” a source said.

The overlap is seen as an outcome of creation of new districts. The number of districts in J&K have gone up from 12 in 1995 to 20, and the number of tehsils have increased from 55 to 217. 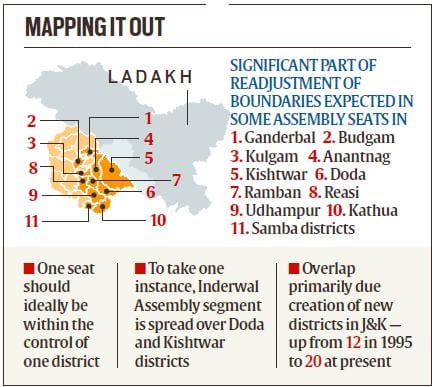 Besides factoring boundaries of administrative units, the Delimitation Commission will also consider geographical features, communication facilities and public accessibility while reworking the limits of existing constituencies and adding another seven to take the total to 90 seats.

The Commission was recently on a four-day visit to the Union Territory, where it met 280 delegations comprising nearly 800 people and heard their suggestions on the delimitation process. Representatives of all regional political parties, barring PDP, met the Commission to give their feedback.

According to sources, the Commission is expected to now hold a series of meetings to assimilate feedback of district commissioners, political parties and public representatives to decide the new boundaries of existing seats and create seven new ones, following which this would be shared with its four associate members — two from the National Conference and two from the BJP. After making changes based on the feedback of associate members, the draft will be made public to seek suggestions, and any challenge to the redrawn boundaries.

The seats will be finalised only after this.

The Commission now has time until March 6, 2022 to redraw the boundaries.