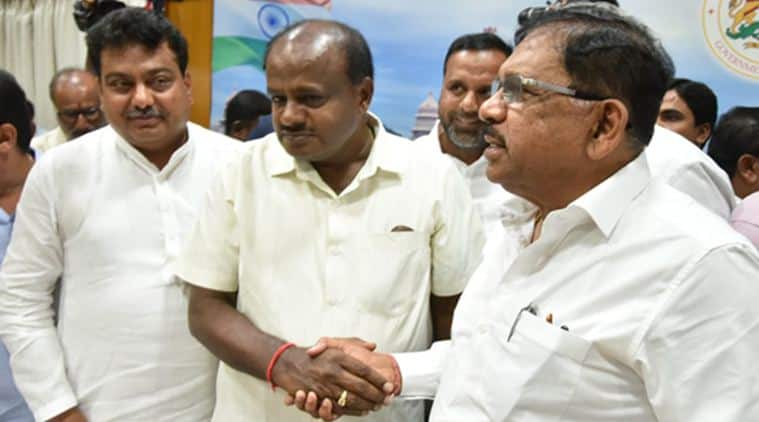 Two Karnataka Congress MLAs identified as rebels met BJP leader S M Krishna on Sunday at his residence, in the presence of senior leader R Ashok, in a sign of the revival of the party’s efforts to dislodge the Congress-JD(S) coalition government in Karnataka. Ramesh Jharkiholi and K Sudhakar are among the seven-eight MLAs identified in the Congress as being opposed to JD(S) leader H D Kumaraswamy continuing as the Chief Minister of Karnataka.

Both Jharkiholi and Sudhakar claimed that their visit to Krishna — a former Congress CM — was a courtesy call and not a political meeting. “We wanted to wish S M Krishnaji after the BJP won 25 seats in Karnataka,” Jharkiholi said after the meeting. Sudhakar claimed he did not know that BJP leaders would be present at Krishna’s residence when he visited him.

Jharkiholi and Sudhakar were among the six Congress MLAs who had travelled to Mumbai in February, allegedly at the behest of the BJP and its state chief B S Yeddyurappa, in an attempt to topple the coalition government. The plan however had fallen through after a tape leaked in which purported BJP leaders including Yeddyurappa could be heard trying to entice opposition MLAs to overthrow the coalition.

Incidentally, both Krishna and Ashok, whom the Congress rebels met Sunday, belong to the Vokkaliga community, which has traditionally allied with the JD(S) in state polls. The move to use the Vokkaliga leaders is seen as an effort to prevent antagonisation of the Vokkaliga community should Yeddyurappa, a Lingayat leader, be seen as triggering the collapse of a government headed by a Vokkaliga.

The BJP, which won 104 seats in last year’s Assembly elections, had been kept out of power by a post-poll coalition forged by the Congress (80 seats), and the JD(S) (37), in the 224-member House where 113 is the simple majority.

Since the coalition took over on May 23, 2018, the BJP and its veteran president Yeddyurappa have tried to woo over a dozen coalition MLAs in order to reduce the alliance to a minority and stake claim to form a government. JD(S) sources said they expect the BJP to step up efforts after Narendra Modi is sworn in for a second term next week.

Fearing defeat if the Karnataka Assembly is dissolved, in the wake of the BJP’s huge victory, Congress and JD(S) leaders have been trying to dissuade Kumaraswamy from resigning. Earlier, he had faced open criticism by Congress leaders acting reportedly at the behest of CLP leader Siddaramaiah.

Congress Deputy CM G Parameshwara expressed confidence last week that the coalition would withstand BJP attempts to poach its MLAs. “We have discussed at length the Lok Sabha results. This referendum has been given to the national election, not the state polls. So, we will continue our state coalition under the leadership of Kumaraswamy. All our MLAs are with us… We have reposed faith in Kumaraswamy,” he said.

JD(S) sources believe that while Congress leaders led by Parameshwara are keen on keeping the coalition going, the Siddaramaiah group would not mind if the BJP manages to wrest control.

Meanwhile, with Kumaraswamy advising his leaders to wait and watch as of now, JD(S) leaders have been advised to not talk to the media about the huge Lok Sabha loss, including of party president H D Deve Gowda and Kumaraswamy’s son Nikhil.