“For years, nobody comes here. Now suddenly, every single day, they come to each home, asking for votes… Those people in the glass buildings don’t vote. We do.” 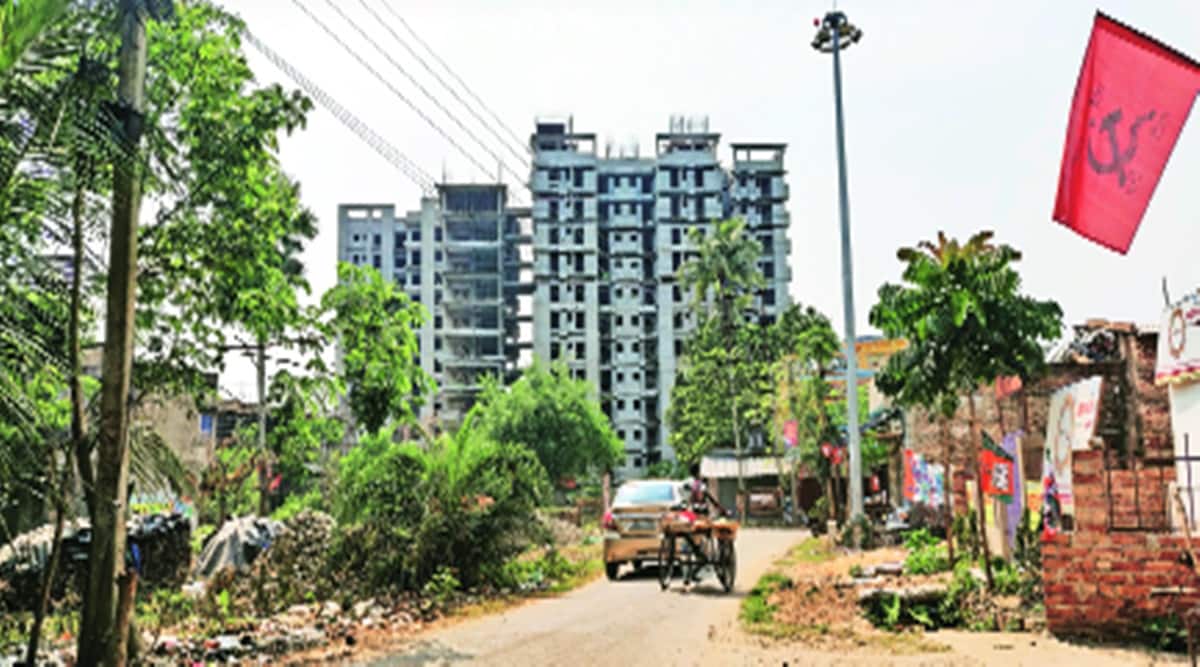 It is a hundred metres and two whole worlds apart. On one side, just before the road turns into the village, there are manicured lawns, and six lane roads. The glass edifices of the biggest hotel chains in India and corporate buildings in Kolkata’s satellite town of Newtown glisten in the sun, next to multi-storeyed flats that boast of clubhouses and tennis courts. But as evening comes, and the shadows of the buildings lengthen, they fall on the small bylanes of Kada and Patharghata, villages on the edge of this luxury, where most homes are still huts, and by the evening, women collect to store water from functioning handpumps. For four years and eleven months, the villages hidden away in Newtown are mostly forgotten, their identities subsumed. But with polls in the constituency of Newtown Rajarhat, in the North 24 Paraganas district on April 17, suddenly, as always, there is attention.

In one narrow concrete lane in Kada village, Ashok Biswas opens his grocery shop at 6.30 am, which he keeps open till 9.30 pm at night, watching as people go past. Only in the last month has he seen any political workers pass by. “For years, nobody comes here. Now suddenly, every single day, they come to each home, their flags in hand, asking for votes. They are like ghosts that appear once in five years. Those people in the glass buildings don’t vote. We do.”

Biswas says Kada is a predominantly Hindu village of close to 1,200 people, and its desires from the government are unlike those of the Newtown “elite”. What defines their decisions are still welfare schemes, the building of roads in their lanes, and the sensitivity of the state government to their needs. To that, echoing the voices of many around him, he says it cannot be argued that TMC chief and Chief Minister Mamata Banerjee has done nothing. “You see this cement road, it was not like this before. I will say that during lockdown we got rice, and the Rupashree and Kanyashree schemes for women are very good. I also got two cycles from the state government. In that sense, there is no problem with the state government. Bhalo kaaj koreche, bhaabe ora (they have done good work, they think about us),” Biswas said.

Biswas though still has a word of criticism, that also echoes the consensus around him. The only problem, he says, is “sushasan” (good governance). If you see what has happened in Newtown, so many buildings have come up, but the politicians have all become rich. They have earned their money. Even those from our village connected to the government have made money. This should not have happened. If the TMC can control that, then they are a good government,” Biswas said.

But while the bylanes in Kada are still narrow, lives have not been untouched by Newtown’s boom. Some of the employment demographic has changed, with many of the younger generation shifting from farming to finding work in and around the urban economy. Many for instance, have turned to working for LPG distributors. For the young and the aspirational however, this is not enough. “The CPI(M) took over this land, and the TMC developed it. But what did we get? We are still doing menial jobs. There need to be more opportunities for us, and universities, not private ones, which we can afford to go to nearby. We have tried the other two, and it is perhaps time for the BJP,” said Swapan Saha, a 22 year old youth who works as a driver in an LPG distribution company.

Two kilometers away, at the panchayat headquarters of Pathraghata, there are more signs of the wealth petering down. There are shops that sell televisions and air conditioners, and glass façade beauty salons, that didn’t exist a decade ago. In a campaign across the state which has seen communal overtones in places, and in a panchayat, where the population are evenly divided between Hindus and Muslims, there is little sign of polarisation. Samar Thakur, of Pathraghata village says, “That might happen in other areas. Here, there is no Hindu Muslim, even though elections have been violent in the past. Here the issue is of unnayan (development), and work, and the local MLAs. It is basically between the BJP and the TMC.”

The candidates in Newtown Rajarhat are also emblematic of the convoluted politics that Bengal is seeing across this campaign. The BJP candidate is the erstwhile TMC MLA, Sabyasachi Datta, who joined the BJP in 2019, and has since been appointed secretary of the West Bengal unit. The TMC candidate is former CPI(M) leader Tapas Chatterjee who lost to Datta in 2011, when the constituency came into being after delimitation. Both carry the reputation of being strong organisational hands. And both carry the baggage of allegations of corruption, and alleged connections to “local goons and syndicates”. “They are both basically the same kind of people. There are allegations of corruption, and being connected with syndicates that rules the area a while ago, but both are accessible and have their own loyal votebanks,” one TMC local worker said.

In Pathraghata, with both primary contenders from other parties, there seemed unease at the candidate selection in both camps. While a BJP local leader said that until 2019, it was Datta that had worked against the rising BJP cadre, TMC local leaders said much the same about Chatterjee. Both though, ironically said the same thing, that they were working for their leaders, Mamata Banerjee and Narendra Modi respectively, and that the “candidates have ceased to matter.”

In a tightly fought election then, much like in the rest of Bengal, much will depend on what arithmetic works out. In 2016, TMC’s Datta had beaten his closest CPI(M) rival by 9193 votes, with the BJP only managing 8.98 per cent of the vote. In 2019 though, the BJP had risen to be the principal opposition, but the TMC’s lead in the Assembly segment, despite the BJP winning 18 seats across the state had become 23,643 votes. Back in Kada, Ashok Biswas adds another element to the debate on whether Banerjee’s popularity will prevent the BJP’s rise. He said, “Do you know that Kada is basically a Congress village? Only very late into the CPI(M) rule, did we go over, because the party leaders said work could only happen if we voted for the party in power. Some will still decide in the last few days, based on who they think will win. Right now, it seems Didi, but five days are a long time in politics.”