Modi's Sri Lanka visit will be his second foreign tour after taking the oath of office. He is scheduled to travel to the Maldives next month in his first bilateral visit. 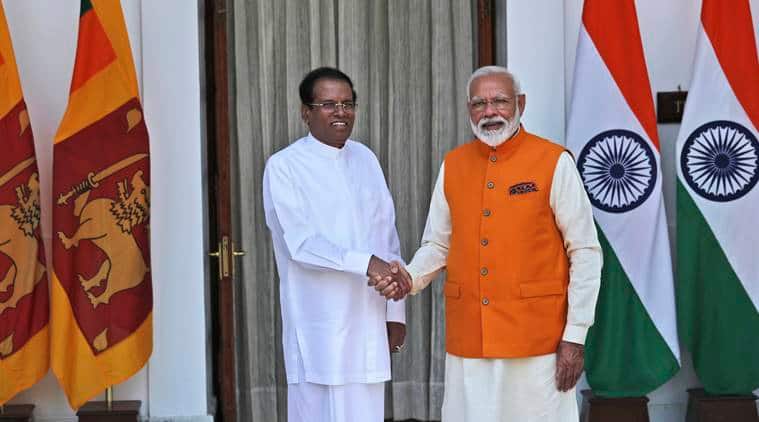 Sri Lankan President Maitripala Sirisena, who is in India as a chief guest for the new government’s swearing-in, Friday said that Prime Minister Narendra Modi will visit the island nation in early June.

Describing it as an “honour for people of Sri Lanka”, Sirisena said that the relationship between India and his country goes back over 2600 years. “PM Modi’s visit is very important to us, we are neighbours and friends, this relationship between India and Sri Lanka dates back over 2600 years. We’re eagerly awaiting for his arrival, it’s a great honour for the people of Sri Lanka,” Sirisena said after meeting PM Modi.

The Prime Minister’s Sri Lanka visit will be his second foreign tour after taking the oath of office. He is scheduled to travel to the Maldives next month in his first bilateral visit. Bhutan was the first country Modi visited in 2014 after becoming Prime Minister. The decision was made during the bilateral meeting between Sirisena and Modi in New Delhi earlier in the day. During the meeting, both leaders noted that terrorism and extremism continue to pose threat to humanity and expressed commitment for closer bilateral cooperation for peace and security in South Asia and the Indian Ocean region, the External Affairs Ministry said. “Modi warmly thanked President Sirisena for his gesture of attending the ceremony and also for his good wishes. He conveyed his government’s continued commitment to further foster friendly bilateral ties with Sri Lanka,” the MEA said.

Sri Lanka was hit by a wave of bombings last month in which over 250 people were killed, including several Indians. India has been assisting Sri Lanka in the investigation of the attack.

The Prime Minister also met with leaders from other Bay of Bengal Initiative for Multi-Sectoral Technical and Economic Cooperation (BIMSTEC) nations who are in the national capital on the invitation of President Ram Nath Kovind. Besides India, BIMSTEC comprises Bangladesh, Myanmar, Sri Lanka, Thailand, Nepal and Bhutan.