Addressing a rally in Purulia district, the Prime Minister accused Mamata Banerjee of shielding infiltrators and using them as her votebank. 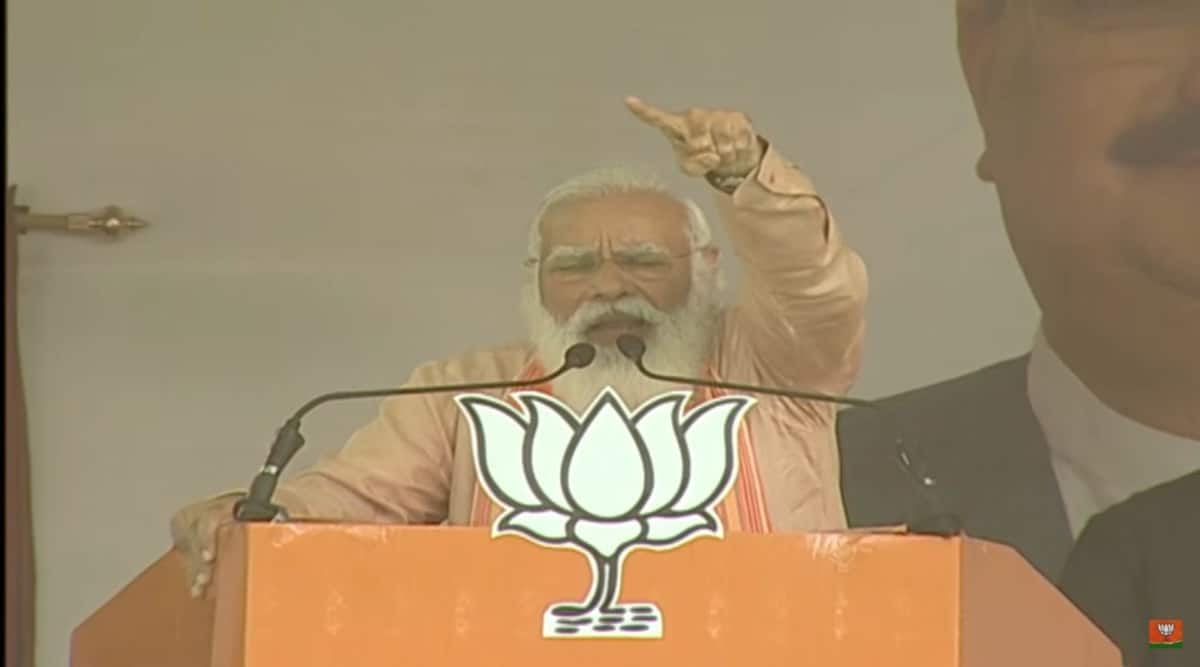 Prime Minister Narendra Modi on Thursday upped the ante against the Mamata Banerjee-led government in West Bengal, saying her days are numbered as the BJP will be ushering in an era of development after they win the upcoming assembly elections.

The Prime Minister also accused the Mamata Banerjee government of patronising Maoist rebels. “The reason for infiltration in Bengal is TMC’s appeasement and votebank politics. It has deprived the poor, Dalits and tribals of their rights. TMC’s syndicate, corruption, extortion and cut-money culture has ruined their lives. They have created a new breed of Maoists in Bengal who loot public money,” he added.

Calling out the Trinamool over not allowing central schemes in West Bengal, Modi said, “We believe in Direct Benefit Transfer while the TMC believes in transfer of commission. It did not allow implementation of the Ayushman Bharat Yojana and PM-Kisan Samman Nidhi Yojana as there was no scope to take any commissions.”

Saying that the TMC supremo had sided with the terrorists during the Pulwama terror attack, he added, “People of Bengal have a strong memory. They have not forgotten who accused the army of plotting a coup and whose side Mamata Banerjee took during the Pulwama attack.”

Referring to the conviction and death sentence given to Ariz Khan in the Batla House encounter case, Modi said, “This has brought to light a lot of new questions. When inspector Mohan Chandra Sharma was shot during the encounter, Didi was supporting the terrorists and had questioned the operation.”

Promising to solve the water crisis in Purulia, the Prime Minister said, “First, the Left Front government and then the TMC did not let industries flourish here. The kind of work for irrigation which should have happened years ago never took place. I know the problems faced by the people in rearing livestock due to lack of water. The TMC government was busy in its khela (game) while ignoring farmers. Mamata Banerjee has given you a life that is dominated by water crisis, migration and has always discriminated against you.”

Wishing the Chief Minister a speedy recovery, Modi said that the people of Bengal have already made up their minds and are going to wipe out TMC this time. “Didi is taking out her frustration on me. But for us, she’s a daughter of this country and I respect her as that is our culture. I pray to God that her injuries heal soon,” he added.