‘Gods of different religions haven’t warred, so we shouldn’t either.’
Ritwik Sharma reports from Ayodhya. 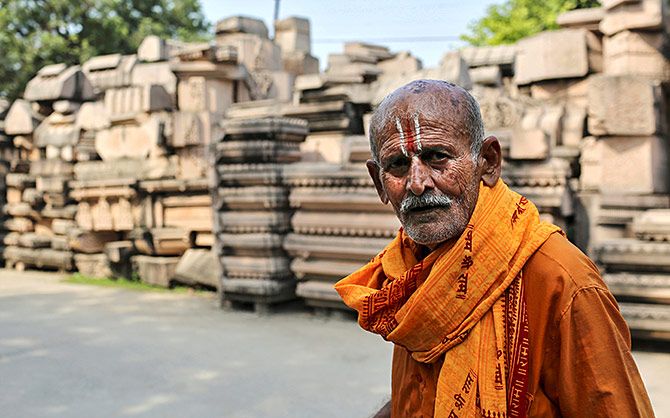 At his ashram in Ayodhya, a sadhu who threatened to light his own pyre last year claims that every nationalist wants a Ram temple to be built at the lord’s birthplace.

A stocky bearded figure in a saffron dhoti and robe, Mahant Paramhans Das has enjoyed his share of media attention. Last year, days before the December 6 anniversary of the demolition of the Babri Masjid, he declared he would commit suicide but was prevented from doing so.

Since then, he says, he has involved locals (including Muslim women) in chanting ‘Jai Shri Ram‘, organised recitals of the Hanuman Chalisa and brought together seers at a recent religious conclave.

His right hand flicks rosary beads rapidly as he speaks and his face, smeared with turmeric and a streak of vermilion on the forehead, cannot hide his upbeat mood as the final verdict from the Supreme Court on the Ayodhya title dispute draws near.

“People don’t fight over religion in Ayodhya. Babar (the Mughal emperor on whose orders the 16th-century mosque was said to have been built) was a foreigner and invader. Even a Muslim doesn’t want a mosque in his name,” declaims Das.

The demolition of the Babri Masjid in 1992 by kar sevaks was a seismic event that altered the course of Indian politics and cemented the rise of Hindu nationalism. In its wake, a land title case was lodged afresh at the Allahabad high court.

In 2010, the court ruled that the disputed site be divided equally between the three parties involved — the Nirmohi Akhara, a religious denomination of sadhus; Ram Lalla Virajman, the infant deity represented by the Vishva Hindu Parishad-run Ram Janambhoomi Nyas; and the Sunni Waqf Board. The parties appealed in the Supreme Court which finished hearing the case and pronounced a verdict on November 9 (this report was filed before the judgment). 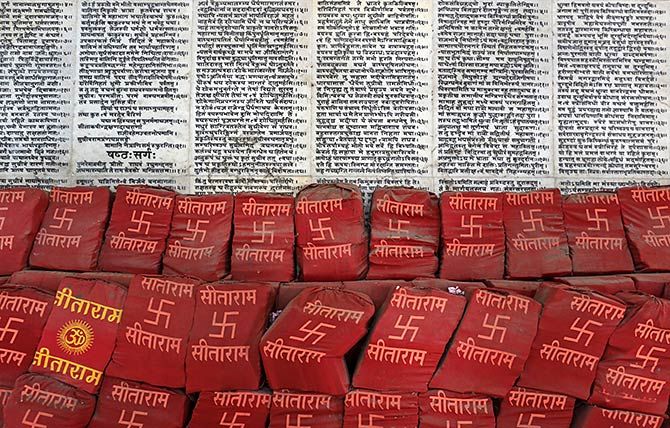 Ayodhya’s Hindus anticipate a verdict honouring the belief that views the site as the birthplace of Ram. Paramhans Das hopes for a ruling that ratifies the construction of a Ram temple.

Interestingly, he also observes that a please-all verdict — one that has something for each of the litigants instead — will work to the advantage of the ruling Bharatiya Janata Party, as it can easily find a satisfactory legislative solution and continue to consolidate Hindu votes.

Mahant Dinendra Das, head of the Nirmohi Akhara, is conciliatory, saying seers have to build consensus. The akhara had petitioned a sub-judge of the Faizabad district in 1885 seeking construction of a Ram temple at the site, and in 1956 it had moved the civil court claiming the land.

Temples and ashrams abound in Ramghat, to the east of the Chowk-Ayodhya Road and minutes from the disputed site on a hill to the west. The neighbourhood isn’t crowded, except for a dense population of monkeys and policemen.

Among the places that attract visitors here is the Choti Chawni temple, which is home to Ram Janambhoomi Nyas President Mahant Nritya Gopal Das.

Akash Kesarwani, a Class 12 student who is a member of the Congress Seva Dal, fills in at his family’s religious goods store facing the temple. He is an exception in a family of BJP supporters, he says, but shares their hope that the construction of a temple will be allowed.

“People do talk about the Babri Masjid, but Ram resides in every home here. A Ram Janambhoomi will help tourism, create employment and develop Ayodhya,” he says.

Another tourist spot is the Nyas-run Karsevakpuram. The workshop gets donations from visitors and boasts a collection of engraved bricks collected decades ago, spelling out the god’s name in various Indian languages. Some were even sent from abroad. The outer walls are adorned with Ramayana murals. All is in readiness for the construction of the temple. 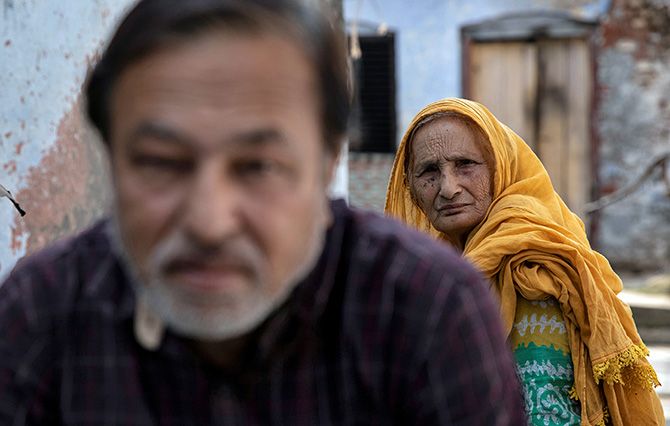 Muslims, too, profess to want amicable relations between the communities. They are unwilling to dwell on the past and wish to move on. Iqbal Ansari, a litigant in the land case, says, “What happened in Ayodhya is known to the court and the world. We will accept and respect the court’s decision.” Ansari and his father, Hashim Ansari, who died three years ago, have fought for the right of Muslims over the Babri Masjid land.

He says there is no quarrel between Hindus and Muslims in Ayodhya. It is tradition for the communities to take part in each other’s ritual practices such as fasting during Ramzan and reciting Hindu texts, he claims.

“Gods of different religions haven’t warred, so we shouldn’t either. It is fuelled by politicians. If these politics were shunned, India would have been more powerful than China or Russia,” he adds.

Haji Mahboob, also a litigant whose father was party to the title suit, says, “The case has gone on for 70 years. I will certainly accept the Supreme Court’s decision.”

Mahboob was one of those who had recently suggested that in the interest of social harmony Muslims should delay the construction of a mosque in case the verdict went their way. He says everyone is worried about the outcome.

“There is peace so far, and people are fine here. But when outsiders come and cause trouble, things can go wrong.”

The youths of Ayodhya want closure too.

“Every year brings December 6 and with it ‘Chalo Ayodhya‘. We hope this ends now,” says Mohammed Amir, who runs a vehicle repairs shop. He adds that the issue gains importance only during elections. His brother Sayeed agrees that a slumping economy is the major challenge for all. “If there is no development in Ayodhya, it’s because it is at the heart of national politics.” 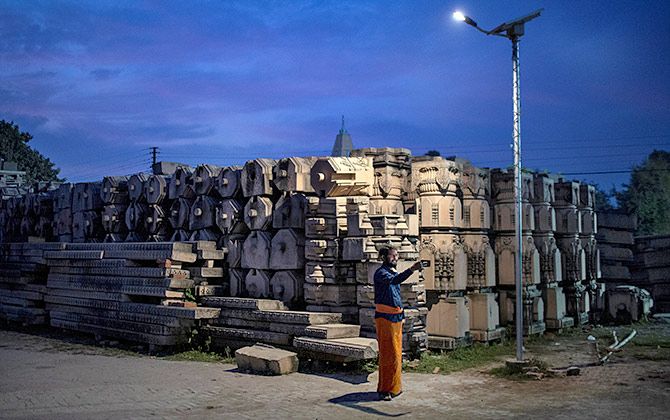 Ayodhya has been at the centre of a legal wrangle for decades. In December 1949, a statue of the infant deity appeared in the Babri Masjid, following which the government locked the mosque to prevent communal tension.

The VHP led the Ram Janambhoomi movement in 1984, raising the demand for a Ram temple to be built at the site of the Babri Masjid and that the mosque be relocated to nearby Faizabad.

In February 1986, following a sessions judge’s decision, the Rajiv Gandhi-led Congress government ordered the gates be unlocked to let Hindus hold prayers within.

According to journalist Dhirendra K Jha, who co-authored Ayodhya The Dark Night: The Secret History of Rama’s Appearance in Babri Masjid (2012), the religious class including seers is no less political than ordinary folks.

“When they say that even Muslims are in favour of building a temple, I see some kind of politics in it. Because they have to live in Ayodhya, you will say whatever you want and Muslims will not object. That absence of objection doesn’t necessarily mean willingness.”

The talk of vikas (development) by the BJP when it came to power in 2014 has not moved beyond rhetoric, Jha says.

The first legal blunder was committed in 1949 as the administration should have removed the idol from the mosque, he says.

Ram worship in a limited sense began then. People were allowed inside in large numbers when the lock was removed in 1986.

“The first mistake of not removing the idol in 1949 was enough to turn the mosque into a temple,” Jha adds. The legal row over land is also seen as more complicated than a Hindu versus Muslim issue. Jha points out that a Shia-Sunni ownership dispute was resolved before Independence, and that Shias have been propped up by the ruling class to show the Muslim community as divided.

On the Hindu side, the Ram Lalla Virajman came into existence in the late 1980s, several decades after litigation started, he adds.

Purushottam Agrawal, writer and theologian, says the idea behind the Ram Janambhoomi movement was to replace inclusive Indian nationalism with a Hindu-dominant nationalism. “It has created a very aggressive, unreasonable constituency which is unconcerned with legal and democratic processes,” he says.

But, he points out, an authoritarian or monolithic project that exploits Hinduism cannot thrive for long.

Given the innumerable deities worshipped in Hinduism, an obsession with one god — like one nation or one language — cannot work, as it is not part of the everyday experience of the average Hindu.

The Congress government unlocked the gates after facing backlash for overturning the Supreme Court judgment on the Shah Bano case.

In addition, a competitive mobilisation on the part of Muslim leaders as well as a sustained Ram Janambhoomi campaign helped Hindu hardliners, he says.

“Secularists also ignore the depiction of Rama as a forceful warrior, and only talk of a ‘soft’ god. In Hindu mythology, he is considered both as strong as vajra (the mythical weapon of Indra) and as soft as a flower.” 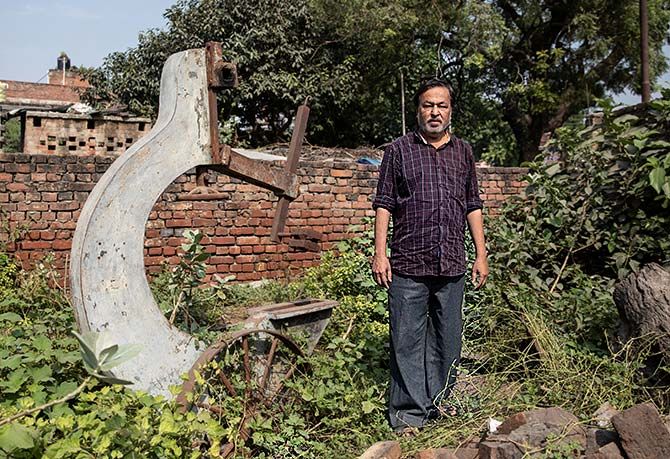 The Ramayana’s many versions do not confer great importance on location. The fact that Ram’s father Dasharath was unable to have a son with any of his three wives is more significant.

Ayodhya, in many folk variants, is the ‘cursed city’ because it turned Sita away. That a king sent his pregnant wife into exile is a sin that the city has to pay for, it is believed.

Diana Eck writes in India: A Sacred Geography that myth has created a fine network of imaginary connections between physical locations in India that is often stronger than ‘real’ connections.

The Ramayana and the Mahabharata have monumental journeys embedded within them and we often see remote places linked to the main narrative (for instance, Rama was in a certain place, Sita wept in another, Bharat grieved in yet another, and so on).

A case was never quite made for Ayodhya as the centrepiece of the epic.

In present-day Ayodhya, as it awaits a historic final word, the relatively modest 2.77 acres — about the size of two football fields — are already a space where the visitor, stripped of the mobile phone and camera, is allowed in for a darshan of the ‘birthplace of Rama’.

In the idiom on the street, the Babri Masjid is but history.