The billions India invested in dams, schools, etc in Afghanistan will be gone.
The Hindu and Sikh population of Afghanistan has already shrunk from some 200,000 to about 500, points out Rajeev Srinivasan.

Indian geo-strategists are rightly worrying about the fallout on India from the Aghan situation and America’s comprehensive defeat there.

The specter of Saigon 1975, with the last helicopter leaving from the US embassy, and desperate people hanging on to it, haunts those Afghans who will be seen as collaborators with the Americans.

After consecutive defeats of two superpowers — the Soviet Union and the US — the Afghan Taliban and their sponsors the Pakistanis must be feeling their oats.

Pakistan now has the ‘strategic depth’ they have long craved; and they will redirect their pious holy warriors (after all, many Taliban have been ISI in beards and baggy pants) towards India.

We can expect a long hot summer of discontent.

Even the Economist magazine, a known cheerleader for the Deep State, and which I recall was enthusiastic when the US invaded Afghanistan in 2001, is now backpedaling furiously.

The US, in general, acts like a gigantic baby. It latches on to a shiny new toy, spends a lot of time and energy on it, then tires of it, and discards it.

That’s what’s happened to Afghanistan: The US basically got tired of spending time and money on ‘democratising’ the country, so they just took their ball and went home, leaving Afghans worse off than they were before 2001.

Vietnam recovered from the US dhritarashtra alinganam, but it took them 40 years.

Therein lies a lesson for India: You depend on American attention, and friendship, at your peril.

This is why India has long been suspicious of close ties with the US (although clearly Pakistan, a US ‘ally’, has successfully navigated these turbulent waters).

Nevertheless, India has come around to the idea that the Quad is beneficial.

Certainly, Japan is as committed as India, because they too face an existential threat from China.

Australia and the US, separated by oceans from China, are only mildly involved.

There is an amusing metaphor about a ham and eggs breakfast to show the difference between ‘involvement’ and ‘commitment’.

The chicken is involved, but the pig is committed. India, and Japan, are committed.

The siege of Kunduz in 2001 was a point of inflexion

The real problem is that the US Deep State has, for unfathomable reasons, been enamored of Pakistan.

This has enriched the ruling class in that country, which consists of the army and the infamous 24 families that run the show. It has done little for the public.

There is some version of the Great Game between Russia and the British Indian empire that the US Deep State has been playing since independence.

The Anglosphere wanted to have a foothold in the region to keep an eye on the Soviet Union and to deny it access to the warm water ports of the Indian Ocean.

In addition, there were some absurd ideas about accessing the mineral wealth, especially oil, of the Central Asian ‘stans.

This made Pakistan seem strategic to the Deep State, and they made them a treaty ally in the old CENTO days.

The sad fact is that any utility Pakistan may have had for US strategic interests has long been superseded by its nuisance value as a nation that uses terror as an instrument of state policy.

There is a Pakistani manual of war (The Quranic Concept of War by Brigadier S K Malik) that offers a pithy definition: ‘Terror is not a means of imposing [a] decision on the enemy; it is the decision we wish to impose [on the enemy].’

They have practised precisely this.

Yet the Deep State’s fascination with the Pakistani Army persists, even after Osama bin Laden was discovered comfortably ensconced in a garrison town.

Observers have long pointed out that this would not end well.

The point of inflexion was the siege of Kunduz in November 2001.

The Northern Alliance had surrounded most of the Taliban top brass (which were basically mid-level Pakistan army and ISI officers) and was on the verge of massacring them.

But the CIA colluded with the ISI to airlift hundreds of them out to Pakistan.

I noted then (The Siege of Kunduz) that it was a peculiar and unfathomable thing for the US to do, when the Taliban were about to be wiped out.

The Northern Alliance, which later formed the core of the Afghan national government, was never able to gain the same leverage over the Taliban again. 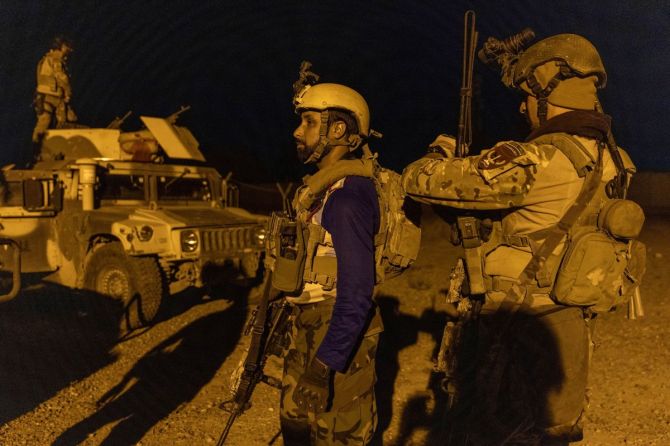 The British were never really able to control Afghan tribes.

And now the tribes have defeated both the Soviets and the Americans.

So a certain mythology has grown up around the invincibility of the lawless Afghans.

Perhaps the US Deep State has a secret plan? Can they quietly turn the fierce Afghans against the Chinese, by supporting the Taliban to foment civil war in Chinese-occupied Xinjiang? The oppression of Muslim Uyghurs there continues.

This is a good theory, but there are flaws on both counts.

One, the Afghans are not superhuman. Maharaja Ranjit Singh did defeat the Afghans and keep them under his control for some years.

Two, unless they are doing taqiya, both the Taliban and Pakistan, despite avowed support for Muslims, have been deathly silent about the Uyghurs.

A more likely scenario is that China will have untrammeled access to $3 trillion worth of Afghan minerals.

That part is speculative, but there are real losers.

India is one: The billions India invested in dams, schools, etc will be gone.

The Hindu and Sikh population of Afghanistan has already shrunk from some 200,000 to about 500 (CAA, anyone?).

The Durand Line has been erased, but instead of Pashtuns uniting on both sides, Pakistan will soon control all of Afghanistan.

Of course, the biggest loser is the Afghan population. For them, and for us, it is an unmitigated disaster.