The listing day gain-to-loss ratio for FY21 was 71 per cent, the highest since FY17, when it was 85 per cent.
Sundar Sethuraman and Samie Modak report.

Financial year 2020-2021 (FY21) proved a profitable year for investors in IPOs, with over 70 per cent of the companies providing seeing gains on listing day.

The average listing-day gains stood at 34 per cent, the highest in about five years.

A total of 31 maiden offerings hit the market in the fiscal.

Of this, the stock prices of 22 companies finished higher than their issue price.

The encouraging performance was underpinned by buoyancy in the secondary market.

The Sensex and the Nifty rose nearly 70 per cent during the fiscal — the biggest gain since FY10.

“The main reason for super listing gains was the bullishness in the secondary market,” says Ambareesh Baliga, an independent market analyst. “The IPO market always follows the secondary market — when the markets were down at the beginning of the financial year, no one filed for an IPO.”

“And once the markets turned bullish, companies started filing for IPOs. The first set of IPOs this year gave extremely good listing gains, and the stocks did well even after the listing day,” he added.

Of the nine stocks that ended with losses on Day one, UTI Asset Management Company and Kalyan Jewellers India fell the most at nearly 14 per cent each.

The other seven stocks saw single-digit losses on the first day.

However, the average listing day gain stood at 20 per cent that year.

The gain-to-loss ratio in FY18 dropped to 58 per cent. 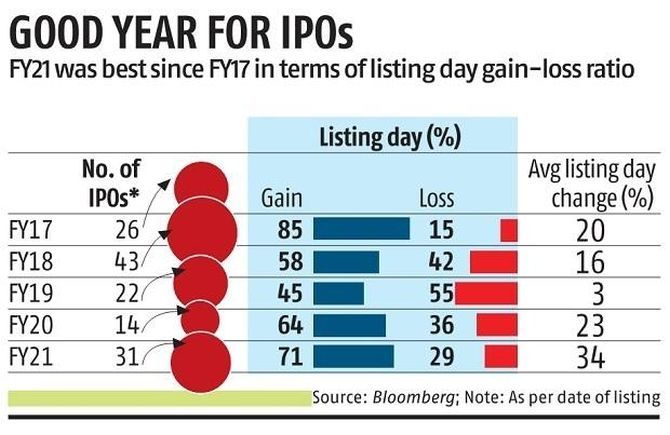 “The few tepid listings were due to company-specific factors such as availability of better options in the secondary market, ” said Pranjal Srivastava, independent capital markets professional..

“Also, there was a bit of fatigue among investors as so many IPOs came to the market at the same time. On an aggregate basis, it was a positive year for IPOs,” Srivastava added.

Seven IPOs hit the market in a single week in March.

While there was a lot of hype around these issues, many disappointed investors with poor listings.

“The tepid listings also coincided with the sell-off in the markets triggered by the spike in US bond yields. The IPO market could continue to do well as long as the markets don’t face any severe headwinds,” said Skanda Jayaraman, head-investment banking, Spark Capital.

Some believe FY22 could be relative muted for the IPO market.

“As demand rises, companies with unrealistic valuations will hit the market. Some of the big issues could dry out the liquidity in the system,” Chokkalingam added.

“If LIC’s IPO materialises, it will have a major impact on the secondary market as it could suck the available liquidity. Also, the entry of new investors may not continue at the same pace as we saw last year.”