BJD, which had nominated seven women to keep its promise of 33 per cent reservation in Lok Sabha seats, saw five coast to easy victories. BJD’s Rajashree Mallick, the new Jagatsinghpur MP, has won with the highest margin of 2,71,655 votes. She is followed by BJD’s new Aska MP Pramila Bisoyi, victorious by 2,04,707 votes. 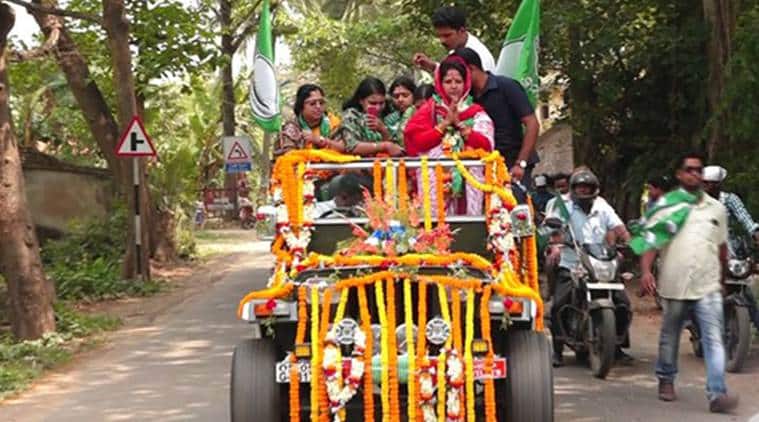 Odisha has elected seven women out of 21 Lok Sabha MPs, incidentally touching the 33 per cent mark representation. In the 2014 general elections, the state elected only two women MPs and later one more in a bypoll.

BJD, which had nominated seven women to keep its promise of 33 per cent reservation in Lok Sabha seats, saw five coast to easy victories. BJD’s Rajashree Mallick, the new Jagatsinghpur MP, has won with the highest margin of 2,71,655 votes. She is followed by BJD’s new Aska MP Pramila Bisoyi, victorious by 2,04,707 votes.

“I thank the CM (Naveen Patnaik). I will not say people have voted for me… only Naveen Patnaik, only conch shell”, said Mallick to journalists.

The other three women MPs from BJD are Sarmistha Sethi (Jajpur), Manjulata Mandal (Bhadrak) and Chandrani Murmu (Keonjhar). Murmu, 25, will also be the youngest MP in the Lok Sabha.

BJP, which has won eight seats in Odisha, has two women MPs- Aparajita Sarangi (Bhubaneswar) and Sangita Singh Deo (Bolangir). “The Modi factor is the foremost factor”, said Singh Deo on her victory, adding “people decided who is the chor” with respect to the ‘Chowkidaar Chor Hai’ slogan of the Congress.

In Bhubaneswar Lok Sabha, former IAS officer Aparajita Sarangi’s victory is under discussion. Not only did the first time candidate win Bhubaneswar for BJP, which BJD has won five times before, she won despite none of the underlying Assembly constituencies going to BJP. In 2019 assembly tally, six seats from Bhubaneswar went to BJD and one to Congress.

“The only other person from BJP matching this sort of a victory is Suresh Pujari who won Bargarh (Lok Sabha) despite BJD winning all 7 underlying assembly seats including one by Naveen Patnaik. Aparajita and Suresh are two BJP leaders to watch in the state”, said a BJD leader.

The state Lok Sabha polls also saw losses for many candidates with a family legacy in politics. Kalikesh Singh Deo, a two-term MP and son of BJD heavyweight A U Singh Deo and Samarendra Mishra, son of Congress veteran Narasingha Mishra, lost in Bolangir.

Kendrapara, which was perhaps one of the most keenly contested seats between BJD and BJP again chose the regional party. With Anubhav Mohanty’s decisive victory in 2019, BJD has now won Kendrapara six times in a row.

Political analysts in the state also point out that Kendrapara has the unique distinction of defying Prime Ministers who campaigned for their candidates. “Narendra Modi stumped for Panda and he lost. But previously even I K Gujral, Narasimha Rao and Rajiv Gandhi have addressed rallies for candidates who went on to lose”, stated former journalist Rabi Das.

“Indira Gandhi and Moraji Desai also campaigned for candidates in Kendrapara who lost”, said Baidyanath Chaterji, a long time BJP politician based in the district.