Left stranded by a nationwide lockdown, which has halted all public transport, hundreds of labourers devoid of work have started leaving big cities on foot. 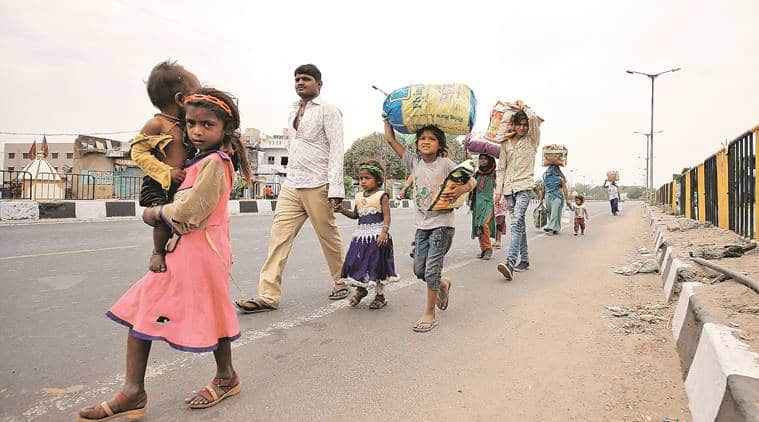 Antresh Kumar, 21, started walking at 3 am on Wednesday from Dharampuri in Najafgarh, South West Delhi. Facing the prospect of no work due to the 21-day lockdown, the daily wager decided that heading home to Moradabad in Uttar Pradesh was his best option. Even if it meant walking most of the 175 km, spending two days on the road, and risking police wrath.

Antresh isn’t the only one. Left stranded by a nationwide lockdown, which has halted all public transport, hundreds of labourers devoid of work have started leaving big cities on foot.

In Ahmedabad, a majority of the estimated 2,000-plus migrant labourers left Tuesday evening, around the time Prime Minister Narendra Modi began his speech announcing the lockdown. Headed for villages in Rajasthan, they had reached Bichhiwara tehsil, 125 km away from Ahmedabad, by Wednesday afternoon, walking and hitch-hiking.

“Scores of people can be seen walking along the Rajasthan border with Madhya Pradesh and Gujarat,” Dr Hira Lal Tabiyar, chief medical and health officer, Banswara, Rajasthan, said. “So far we have received 4,500 migrant workers. We are screening each before letting them enter. The district administration has also arranged for buses at the Banswara border to take them to their villages.”

Dashrath Yadav (32), a labour contractor from Banswara, said he had walked four hours from Ahmedabad before finding any transport. In a group of around a dozen, he said, “We were stopped at a police naaka, and told to hop onto a truck. The truck had at least 100 people and crawled all night due to police checking… We had no food or water, and after we reached Shamalaji in Aravalli, we again walked for two hours to reach Bichhiwara bus station.”

Rajasthan officials confirmed that over 2,000 people from Ahmedabad had reached the bus station by Wednesday morning, and lined up at ticket counters, despite the lockdown. “We arranged three Rajasthan State Road Transport Corporation buses and 15-20 private mini buses and vehicles. They are being transported ensuring social distancing,” said Bichhiwara tehsildar Amrit Patel.

Antresh, who is going from Delhi to Moradabad, said, “We would earn Rs 200-250 daily, now we have no income. Yet the landlord kept asking for rent.” With shops shut, they were finding it difficult to get even food, he said.

Aram Singh set off from Preet Vihar in East Delhi, his few possessions bundled in a bag. Back in the village, the 25-year-old said, they would at least have food. “We will sleep wherever we find space, eat and drink whatever we find, but we have to get home,” Aram said, grateful that police had been cooperative.

Umesh Kumar, 28, was headed with a couple of friends to Ghaziabad’s Lal Kuan, 55 km away. Living alone in Delhi, he said the loneliness got to him after the curfew. “All the places to eat are shut,” he said.

Also headed to Lal Kuan was Virender Singh Yadav, 23, who said he was lucky to find a dhaba in an inside lane in Laxmi Nagar in East Delhi. “Now everything is shutting,” he said, adding that between him and three others, they had Rs 500. “We will walk and rest when we can. Since there is no food available and no bus, there is nothing we can do.”

Some men said they had borrowed money before leaving. Many said they did not know of the Delhi government initiative to give food at night shelters twice a day.

Mrityunjay Kumar, the media adviser to Uttar Pradesh Chief Minister Yogi Adityanath, said they had made arrangements for the migrants headed to the state. “Instructions have been given to district magistrates to provide assistance in terms of travel and food. Hence, DMs have been given the right to start buses.”

In Ahmedabad, labourers from Madhya Pradesh were stuck in Odhav area. On Wednesday, police arranged 15 vehicles for over 500, to take them to Godhra and Dahod. “From there they can cross the border,” said R G Jadeja, incharge, Odhav police station.

In Vadodara, Hariabhai Dhama (34), a contractual labourer, wondered how he would get home to Dahod, almost 150 km away, with his wife, ailing mother and three children. “We have been out of work for five days and there are 20 days more to go. We are surviving on our savings now,” Dhama said.

A few kilometres away, 13 migrants engaged at a construction site in Bhayli started walking almost 200 km to villages in Madhya Pradesh. They had a two-year-old child with them. “What will we eat here? Twenty-one days is a long time,” said Sarthi Bhil, from Ranapur village in Jhabua.

At Surat, Gautam Lal Meena, 27, said he didn’t know by when he would reach his native village of Lohagarh in Rajasthan’s Pratapgarh district. He has been travelling for 24 hours, having started walking from Mumbai and hitching rides on five-eight trucks.

A father of two, Meena said, “We worked as labourers in Borivali. After the Janata Curfew on Sunday, police didn’t let us go to work. We decided to leave Mumbai on Tuesday, but as we neared the Gujarat border, we came to know that Modiji had announced a lockdown for 21 days. The truck on which we had taken a lift left us midway. We walked through the night to reach Surat.”

Meena hoped to get to Banswara and then find a way to get to Pratapgarh, thanking the Gujarat authorities for arranging a ride for them. “Most of the money we had has been spent on paying for the lifts we took and the biscuits we bought to eat,” he said.

He said that at several places, policemen hit them and forced them off the road. “We told them take us to jail. At least we will get food and a place to rest there.”