New York’s push to become the first big school district in the country to reopen classrooms last fall was a high-stakes and risky experiment. 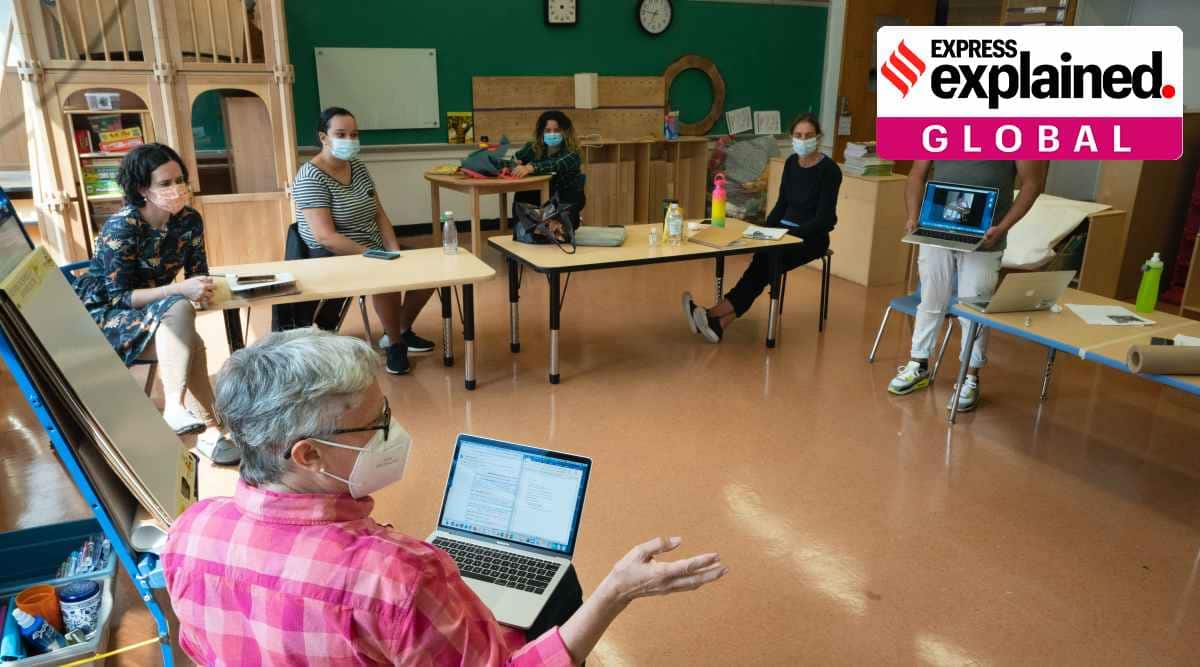 For Julie Zuckerman, an elementary school principal in Manhattan, last summer felt like one never-ending day filled with fear and confusion about New York City’s plan to resume in-person teaching. But in the months since classrooms opened in September, something has shifted.

Teachers at the school, Public School 513 in Washington Heights, appear more at ease, and some say they would like to be in their classrooms even when the building closes because of coronavirus cases. Parents, too, seem more confident: About half of the students are in the building most days, up from less than one-third in September.

Zuckerman expects that even more children will return this spring.

“People have made their peace; they’re not in crisis in the same way,” she said. “I feel there’s a huge night-and-day difference between what was going on last spring and what’s happened this year.”

New York’s push to become the first big school district in the country to reopen classrooms last fall was a high-stakes and risky experiment. It has had its share of miscommunication, logistical stumbles and disruptions — especially when classrooms and school buildings are frequently closed because of virus cases.

But in interviews, parents, teachers, principals and union leaders also provided reasons for optimism at the midpoint of the academic year. In-school transmission of the coronavirus been very low, and there has also been broad agreement that children have benefited from being in classrooms. 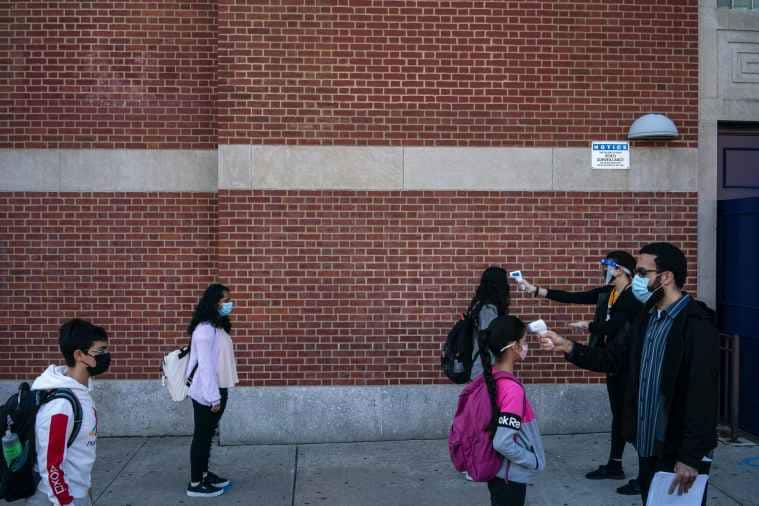 “Having the kids here is so much better for them, for everyone,” Zuckerman said.

The strength of the plan will be tested again in the coming weeks, as about 62,000 middle school students are set to return to classrooms for the first time since November. New York also offers the clearest preview in the United States of what other big city districts — most prominently Chicago, where more schools are set to open next month — can expect as they inch closer to reopening classrooms after almost a year of remote learning.

Despite President Joe Biden’s push to reopen more schools this spring, some districts — including Los Angeles, the country’s second-largest system — do not yet have a plan to reopen at all this school year. On Friday, the Centers for Disease Control and Prevention said that schools should open as soon as possible, particularly for young children. The CDC found that teacher vaccines are not a precondition for reopening, a finding that has been backed up by New York’s safety record so far.

The guidance came as teachers unions across the country have continued to push back on reopening plans.

Districts that do reopen to students in the coming weeks and months are likely to discover that it is just a first step. New Yorkers have struggled to cope with the frequent interruptions to learning — and parents’ schedules — caused when virus cases are detected among students or staff members and classrooms and entire school buildings are forced into all-remote instruction.

The number of closed classrooms and schools has risen considerably over the last few weeks, as test positivity rates across the city have remained high and weekly in-school testing has increased.

Zuckerman said that her school, for example, has been open for only about 10 in-person days in 2021.

The rule was developed at a moment when it was unclear whether Mayor Bill de Blasio had the political support to reopen schools, and when there was much less evidence that schools could reopen safely. The protocol was part of a package of safety measures, agreed on with union leaders over the summer, that allowed New York City to open its schools in the first place.

De Blasio said earlier this month that he would reevaluate the two-case rule, though city officials said it was highly unlikely that safety measures would change before the reopening of middle schools.

For parents of elementary school children, the reopening experience has prompted a roller coaster of emotions: despair over the limits of remote learning; joy at seeing their children back in classrooms; and frustration with the chaos caused by closings.

Last month, for example, Hien Sosa finally got the news that her son could soon return full time to his first-grade classroom in East Elmhurst, Queens.

“I was like, wow, I feel like I just won the lottery,” Sosa, a hospital nurse, recalled. She and her husband, a police officer, could not stay home on the days when their son learned remotely. Sosa’s mother, who helps with child care, speaks limited English and has trouble supervising her grandson’s lessons. Sosa said she felt “ready to give up.”

But her relief about the new schedule was short-lived. Just a few days after her son began attending school five days a week, Sosa learned that the school would close for 10 days because two people in the building tested positive.

He returned a few days ago and comes home happy at the end of the day. “I know he gets some real learning, just a regular school day like he always had,” Sosa said. But she said she felt like she was on borrowed time until the school shuts again.

As closures have increased, some parents have called on the city to change the rule. But the city’s influential teachers union has vigorously protested any change, saying schools are safe in part because of the conservative threshold for closures.

But the union, the United Federation of Teachers, may face growing pressure to accept changes to the rule as more teachers are vaccinated. The union has directly arranged for about 15,500 educators to be vaccinated, according to a union spokesperson, while many other teachers have gotten their shots through regular channels.

Even before vaccines arrived in New York, the city’s schools had not seen high transmission; the average test positivity rate in city schools was 0.55% between October and last Thursday. The seven-day citywide average has been hovering around 8%.

The statistics are partially explained by the random weekly testing of asymptomatic students and staff members, which results in lower rates than citywide testing of people who are showing symptoms or think they have been exposed to the virus.

But the schools statistic also bolsters the view, widely held by health experts, that classrooms can be relatively safe if educators enforce safety measures like mask-wearing and social distancing, which are required in city schools.

After de Blasio shuttered the entire system in mid-November because of rising virus cases, he reopened classrooms only for children with complex disabilities and elementary school students in December. Recently, he announced that middle schools would reopen Feb. 25.

City officials say most middle schools will be able to accommodate many students five days a week. About 500 of the 878 elementary schools and schools for children with disabilities that are already open are serving most students full time. It is not clear whether city high schools will reopen this school year.

Once both elementary and middle schools are open, up to 250,000 of the city’s roughly 1 million students will be able to return to classrooms. Still, the vast majority of city families — roughly 70% — have decided to keep their children learning from home for the rest of the school year. White students, who make up a minority of the overall system, are overrepresented in open classrooms.

Chloe Davis, a teacher in the Parkchester section of the Bronx, said her elementary school has been closed several times since Thanksgiving. That prompted some families to shift to remote learning to regain consistency.

“We haven’t been able to find a rhythm at all,” she said. Davis’ school shares a building with two others, and if two students test positive in any of the three schools, the entire building is closed.

The stream of closings is especially frustrating for working parents like Elisa Muñiz, a pediatrician and single parent of a second grader in Washington Heights. Muñiz said her son, who receives special education services, had been in his classroom for fewer than 30 days since September.

“I can’t tell you how many times the school has closed; it’s a ton,” she said. “It doesn’t just disrupt home life. I’m someone who has a responsibility to be in person at work. It requires a lot more flexibility than sometimes we’re able to have.”

Muñiz has watched her son, an only child, thrive on the days when he is in classrooms with his friends. But he is easily distracted and restless when he switches back to online learning. She wishes she could ask the mayor, “How are we going to help the kids who aren’t making progress?”

New York’s teachers say they are working harder than at any other point in their careers to address that question.

Tiffany Koo, who teaches at an elementary school in the East Village, decided last year to take sole responsibility for a group of students learning online, and another in person, because of a staffing shortage at her school. She livestreams her lessons daily from her classroom so that all students can follow along, and spends nights and weekends working on lesson plans.

“I don’t ever regret it, but it has been incredibly chaotic and difficult at times,” she said of her schedule. “I’m taking it day by day.”

Some days, Koo is not sure the trade-offs of reopening are worth it. Still, she understands why so many parents and students want classrooms to be fully open as soon as possible. She just asks that New Yorkers be patient.

“We all wish this was different,” she said. “Let’s just be kind to each other. We’re all trying to do the best we can.”