‘I still remember back in 1971, the night they both got the news that Dr Vikram Sarabhai had died at his hotel in Kovalam, and rushing off with tears in their eyes.’ 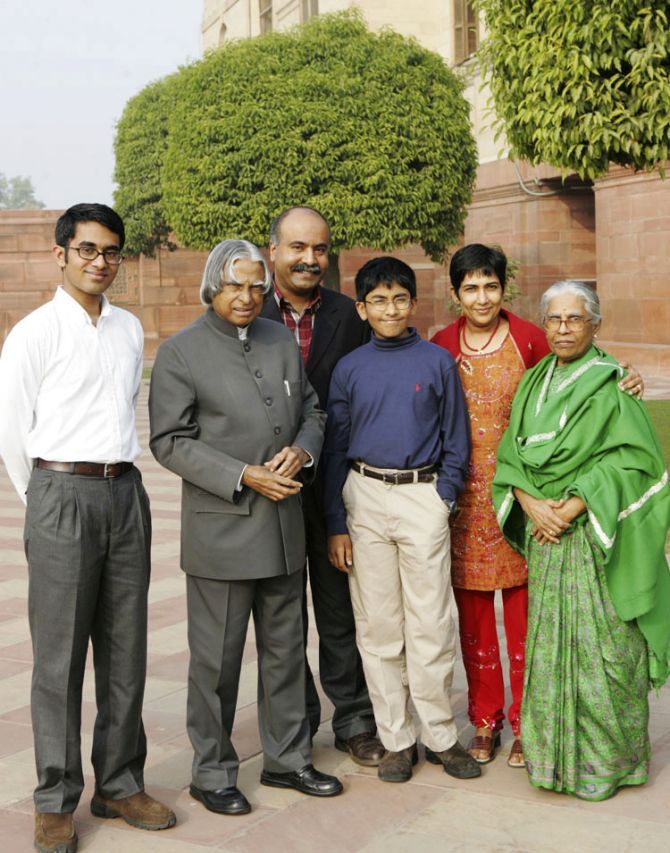 I have a lot of mixed emotions having heard the news of Kalam Uncle’s death. Yes, that’s what I used to call him when I was quite young.

My first memories of Kalam Uncle was when I was about seven or eight, playing on the verandah of our house, with my dad (Dr M R Kurup worked with Dr A P J Abdul Kalam at the Indian Space Research Organisation) and Kalam uncle sitting and talking for hours every day after work.

My dad was a chain smoker those days, but Kalam Uncle was not. I guess second-hand smoke was not an issue then.

I still remember back in 1971, the night they both got the news that Dr Vikram Sarabhai had died at his hotel in Kovalam, and rushing off with tears in their eyes.

When Kalam Uncle left ISRO for DRDO (the Defence Research and Development Organisation) around 1992, my dad was quite sad and somehow after that we, as a family, lost touch with him.

I do remember seeing him on occasions like my wedding, when my dad was ill and he dropped by, but since dad passed away in 1999, we watched him become a beloved President and getting the Bharat Ratna.

The highlight of one of our trips to India was when we visited Kalam Uncle at Rashtrapati Bhavan.

He was kind and gracious, spoke so nicely to my boys, told them how great their granddad was and told them to pursue their dreams.

My father’s generation is passing into the ages with his death. May Kalam Uncle rest in peace.