490 out of 495 families in Chandankhedi village are Muslim. Yet, on December 29, a Hindu mob succeeded in mounting such an attack on Muslims here that they had to hide in the fields.

Some Muslims had to be hospitalised; their property was damaged and even their cattle were not spared.

The day after the attack, came another, this time from the administration.

JCBs and bulldozers were brought in to demolish homes ostensibly for widening the road. No notice was given to the house owners, not even to the sarpanch.

A fact-finding report by a team led by social activist Medha Patkar reveals that Chandankhedi, one of the three places in Madhya Pradesh which saw violence in the last week of December, has never seen any Hindu-Muslim tension.

Of the five Hindu families in the village, four are Dalit and one is from the ‘upper caste’.

The mob that attacked the village was made up of outsiders from nearby villages, reveals the report.

As part of a fund collection drive for the Ayodhya temple, the Shri Ram Janma Bhoomi Nirman Samiti took out a rally through this overwhelmingly Muslim village.

Their intentions became clear when the rally had almost passed through the village.

Villagers told the team that at this point, three of the rallyists climbed atop a minaret of the mosque situated in the Idgah maidan and tried to break it with swords. This made the villagers come out of their homes in protest.

A video of this incident has gone viral.

The villagers told the team that those who had run away to hide in the fields nearby were stoned and they too retaliated by throwing stones.

The mob also attacked and tried to burn the last house in the village, belonging to Kadarbhai Patel. His five brothers were attacked, with one of them, Haatambhai, sustaining a bullet injury. He is in hospital, along with another brother Saddambhai, who was beaten when trying to save a 3-month-old infant from the fire.

The fact-finding team saw the damage done to Kadarbhai’s property, including his tractors, vehicles, TV, fans and cupboard, from which cash and jewellery were looted.

In some other homes, household provisions including foodgrains, garlic, and onion were burnt.

What was incomprehensible though, was the attack on animals.

A few of Kadarbhai’s buffaloes and goats had their bones broken. A goat belonging to another Muslim had its eyes gouged out. 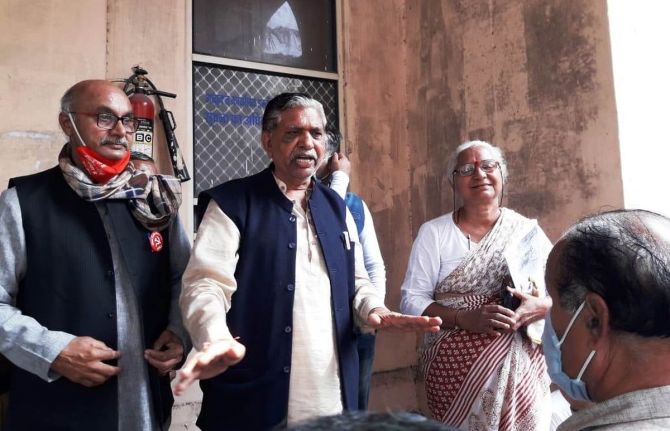 In nearby Betma town, the team spoke to those who had participated in the rally. They denied carrying weapons and alleged that stones had been thrown on them. Was it possible for Hindus to attack buffaloes, they asked.

These rallyists accused Kadarbhai’s family of damaging their own home, and hinted at a pre-planned attack by the villagers by alleging that daily wage workers who normally went out for work had on that day stayed back in the village.

23 Muslims and 2 Hindus have been arrested. The latter were among the three who climbed up the minaret to attack it. They got bail within two days, while 6 of the 23 Muslims are still behind bars.

The team found that 15 families had been dishoused by the road widening that took place on the next day. Not even the presence of an invalid on saline in one of the homes stopped the bulldozers. Even the tubewell and borewell on the road were destroyed.

What was the urgency to widen the road the very next day, asks the report, pointing to the statement made by Manoj Patel, a former BJP MLA, that he was prepared to raze not only homes, but the entire village.

The report also points to the ‘one-sided’ statement by Chief Minister Shivraj Singh Chauhan who reserved his condemnation for the stone-pelting on the processionists alone. 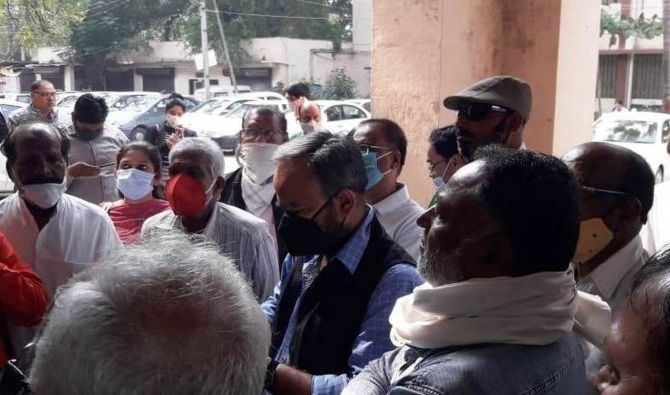 The report indicts the police for their lack of alertness in anticipating the violence and their inaction when the violence was on. The Station House in Charge R S Bhaskare, has been suspended.

The report has demanded that statements be taken from those who were hospitalised, and that the villagers’ losses be properly documented and they be compensated.

The report also demands a judicial inquiry into the three incidents of violence which took place in the last week of December, all of them triggered by fund collection rallies for the Ayodhya temple.

The Chandankhedi incident was the last of the three; the earlier ones, in Ujjain and in Borana village in Mandsaur distirct, saw assaults on mosques and recitation of the Hanuman chalisa outside an Idgah.

Are these incidents linked to the forthcoming local body elections, asks the report.

In conclusion, the report poses the question:

‘These villages have never seen a communal dispute, let alone communal violence. Are attempts to create a communal divide acceptable to the MP administration?’