The Pensioner’s Life Certification Verification app, launched by Meghalaya CM Conrad Sangma in July, is aimed at offering pensioners a “secure, easy and hassle-free interface” to obtain life certificates by verifying their identity using FRT on their smartphones. 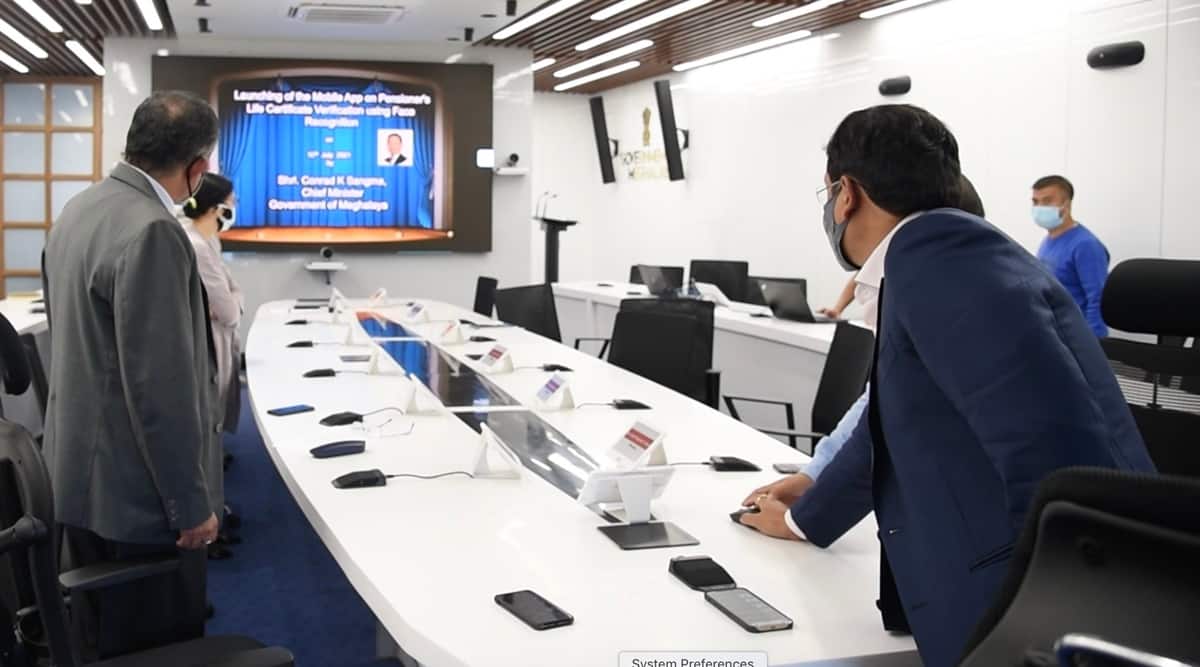 Following privacy concerns about the use of Facial Recognition Technology (FRT) in a mobile application launched for pensioners by the Meghalaya government in July, authorities have said the app was rolled out in “public interest” and that it did not violate the right to privacy.

Responding to a legal notice, sent by Jodhpur-based law student Jade Jeremiah Lyngdoh, flagging privacy concerns about the ‘Pensioner’s Life Certification Verification’ app, the state’s Finance (Pension Cell) Department in a written response has said that the use of FRT was “not mandatory” and those with concerns had the option of not using the facility. It also added that the use of FRT did not “require any anchoring legislation”.

Anushka Jain of the Internet Freedom Foundation (IFF), a digital liberties organisation, which assisted Lyngdoh with the legal notice, said it was worrying that the government thought they could use such invasive technologies in the “absence of any law or regulation”. “Without a law, there is nothing to stop the government from misusing personal data,” she told The Indian Express.

The Pensioner’s Life Certification Verification app, launched by Meghalaya Chief Minister Conrad Sangma in July, is aimed at offering pensioners a “secure, easy and hassle-free interface” to obtain life certificates by verifying their identity using FRT on their smartphones. “The app has come where and when it is needed the most considering the fact that the pensioners are elderly people who have difficulties in travelling for services specially in these times of COVID when their going out should be minimized,” Sangma had said, during the launch.

In the following month, Lyngdoh sent a legal notice to the government saying that FRT was “innately invasive” and highlighted privacy concerns including the lack of an anchoring legislation, which governs the processing of personal data. It added that the public had no way to seek statutory recourse in case their biometric information was misused. The notice also invoked the landmark 2017 Justice K S Puttaswamy vs Union Of India case, in which the Supreme Court established privacy as a fundamental right, to support its argument.

The government, in its response on November 1, said the FRT did not need any anchoring legislation. It argued that it met all the conditions when it came to the right to privacy including the test of proportionality, purpose and aim. It said that the use of the app was “optional” and thereby met the “test of proportionality”, and that the purpose of the technology —to establish the identity of a concerned pensioner — was “well defined”. It also said that it met the requirement of having a “legitimate aim”, since the technology was aimed at “offering additional convenience to pensioners”.

The letter also called the concern about the lack of legal recourse “misconceived”, citing sections 43A and 66 E of the IT Act as options.

The IFF in a blogpost Thursday said that neither Sections 43A and 66 E was relevant in this case. Section 43A of the IT Act neither applies to government departments nor provides for protection of sensitive personal data, the organisation said. Additionally, Section 66E only applies to transmission of images of a private area of any person without his or her consent, and has “absolutely no application or relevance in the use of FRT at all.”

Jain said none of the country’s existing laws were equipped to respond to this technology. “It is very important that new laws are put in place before such technologies are used. But in cases they have already been deployed, there should be some regulation,” she said, adding that a “360 surveillance model” can develop through FRT. “Such surveillance is against democratic ideals of this country,” she said.

The 22-year-old Lyngdoh, who hails from Shillong, added that the response reflected “poorly on the government’s understanding of our constitutional rights.” “It is important for governments to reality-test any proposed projects, especially when they affect the privacy of citizens,” he said.