‘Shivaji Maharaj paid his tributes to Tanhaji’s bravery by placing his necklace on the martyr’s body.’
He then uttered those famous words: ‘The fort is captured, but our lion has fallen.’

Who was Narvir Tanhaji Malusare, the legendary warrior, on whose life and battles Ajay Devgn has produced a film, Tanhaji: The Unsung Warrior?

Historian Dr Sheetal Malusare — whose doctoral thesis was on Tanhaji — is married to Shivraj Malusare, a direct descendant of Tanhaji.

“Tanhaji’s tale is the story of raw bravery, unflinching loyalty and daredevilry for the cause of swaraj espoused by Shivaji Maharaj,” Dr Malusare — who was actively involved with the making of Devgn’s film and has written Narvir Tanhaji Malusare and Shivshahi — tells Prasanna D Zore/Rediff.com.

My husband Shivraj is the 12th direct descendant of Tanhaji Malusare.

This is how we are related to Tanhaji: Kaloji (Tanhaji Malusare’s father)-Tanhaji-Raiba-Mumbaji- Yesaji-Suryaji-Yesaji-Appaji-Balvantrao-Narayanrao-Balkrishna-Shivraj Malusare (my husband). My son Raiba Malusare is the direct 13th descendant of Tanhaji.

How the Battle of Kondhana was won by Tanhaji

Shivaji’s mavlas (the soldiers in Shivaji’s army were called mavlas) were expert mountain climbers. It was a tradition that was developed especially to help Shivaji’s troops catch the enemy unawares during guerrilla fights.

Tanhaji Malusare and Shelar mama (another trusted Shivaji aide and an expert climber), along with a band of 150-odd mavlas climbed atop the Kondhana fort from its steepest side (since named in Tanhaji’s memory as Tanhaji kada or cliff).

Tanhaji’s younger brother Suryaji climbed the fort from Kalyan darwaja, another entrance to the fort, along with 200-odd soldiers.

As soon as they reached atop the fort at midnight, they raised the Maratha war cry of ‘Har Har Mahadev‘ and the fight against the Mughals, led by Uday Bhan, began on February 4, 1670.

The place where you now have Tanhaji’s samadhi is the exact place where the battle between Tanhaji and Udhay Bhan took place.

One of the blows from Uday Bhan’s sword struck Tanhaji’s dhal (a protective shield that is used during sword fights) so hard that it broke, but the resourceful Tanhaji rolled the cloth tied around his waist around one of his hands and used it like a dhaal.

He kept fighting bravely against such odds and finally laid down his life for the cause of Shivaji’s swaraj (self-rule).

One of the blows from Uday Bhan’s sword took his life away.

When Shelar mama saw this, he came down heavily upon the hefty Uday Bhan and killed him during the Battle of Kondhana.

When the rest of the Maratha soldiers saw their leader on the ground they were so shocked that they began retreating from the fort. They had plans to climb down the fort using the ropes that they had used to climb up.

At this moment, Tanhaji’s younger brother Suryaji sprang up to boost the morale of the Maratha troops. He told his soldiers that either they die fighting for the cause of swaraj or lay down their lives on the fort just like Tanhaji and become immortal in history.

Suryaji gave them two options: They were asked to either jump off the steep cliffs and die or fight bravely against the Mughal army.

Suryaji later told them that he had cut the ropes they had used to climb up the fort leaving no other option before the Marathas but to fight to win or die.

How Shivaji found out about the victory at Kondhana

Shivaji was waiting for a signal at Rajgadh — not too far from Kondhana; barely a distance of 16 km — from the Kondhana fort that would convey to him about the victory of the Marathas.

Once the battle was won, it was an old tradition to burn huge piles of dry grass (easily available atop forts to be used as fodder for horses and other milch cattle) atop forts at night so that the smoke from this fire would become visible far away during day time.

When Shivaji saw the smoke atop Kondhana at daybreak he knew that Tanhaji Malusare and his band of brave fighters had won the last fort of Shivaji’s kingdom that was given to the Mughals as part of the Treaty of Purandar signed with Mirza Raje Jaisingh, a Rajput general from the Mughal army.

Shivaji Maharaj made preparations to welcome the victors without knowing that Tanhaji had laid down his life for the cause of swarajy and fulfil Jijabai’s wish of winning the last of the Maratha forts under the possession of Mughals.

After unfurling the bhagwa (saffron) flag of the Marathas, Shivaji’s brave mavlas returned to Rajgadh along with Tanhaji’s body in a palanquin. 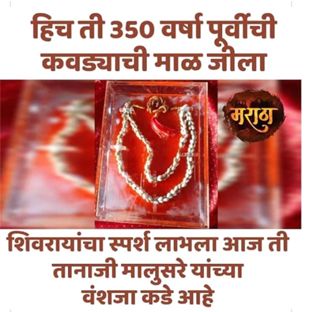 How Shivaji Maharaj paid his tributes

Shivaji Maharaj paid his tributes to Tanhaji’s bravery by placing his Raj maal (the king’s necklace) on the martyr’s body.

He then uttered those famous words: ‘Gadh aala pan sinh gela (The fort is captured, but our lion has fallen).’ 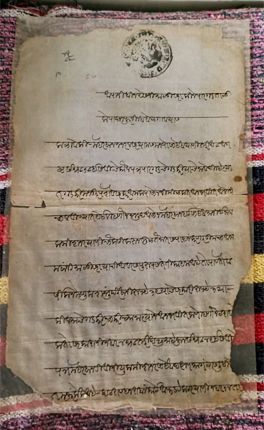 We (the Malusares) have preserved the necklace in his memory, along with the sanad (see photo) (a certificate issued by the British in 1718 certifying that Shivaji had given Pargadh fort in Kolhapur district to Tanhaji Malusare’s son Raiba) letter so that generations to come in Maharashtra can seek inspiration from it.

Keeping up with the tradition of Shivaji Maharaj and the Marathas of treating their enemies with respect, Uday Bhan’s body was buried respectfully at Kondhana before the victorious party returned to Rajgadh.

Tanhaji was not just a brave soldier, but also strongly believed in Shivaji Maharaj’s principles of paying respect to the enemy and so Uday Bhan was given due burial by the battle-weary Marathas even as they grieved over the martyrdom of their leader.

The importance of Kondhana for the Marathas

Shivaji Maharaj had fought and won back 22 out of the 23 forts surrendered to the Mughals according to the Treaty of Purandar. Kondhana was the only fort that Shivaji could not capture and that kept him worried.

Jijabai, Shivaji’s mother, wanted the fort to be captured from the Mughals to restore the glory of the Maratha kingdom.

When Tanhaji visited Shivaji to invite him for his son Raiba’s wedding, he heard how Kondhana’s capture troubled the king and his mother. The brave mavla that he was, Tanhaji volunteered to win the fort for Shivaji Maharaj.

Tanhaji’s tale is the story of raw bravery, unflinching loyalty and daredevilry for the cause of swaraj espoused by Shivaji Maharaj. He calmly told Shivaji that his son’s wedding could wait, but not the capture of Kondhana. 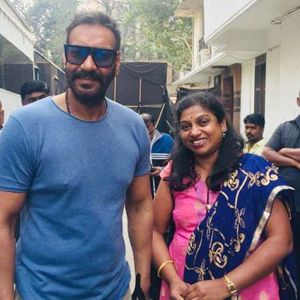 There’s more to Tanhaji than the Battle of Kondhana

Tanhaji had accompanied Shivaji during the conquest of Raireshwar and Torna forts.

He also accompanied Shivaji on his conquest of Surat.

When Afzal Khan was killed atop Pratapgadh fort, Tanhaji was given the difficult responsibility of finishing off the huge army that had accompanied Afzal Khan at Pasarnicha Ghat (the plains at the foothills of the fort) from where the soldiers were expected to flee the Deccan after hearing about Afzal Khan’s death.

When Shivaji chopped off Shaistekhan’s fingers in Pune’s Lal Mahal, Tanhaji was given the responsibility of arranging the decoy in the form of a marriage party so that Shivaji and his troops could enter the palace without attracting any attention.

Tanhaji knew the entire coastal belt of the Konkan like the back of his palm, so he was appointed to look after the construction of Sindhudurg fort in Maharashtra’s Malvan district.