This came days after many of the villages made it clear to the political parties their condition: no water, no vote. 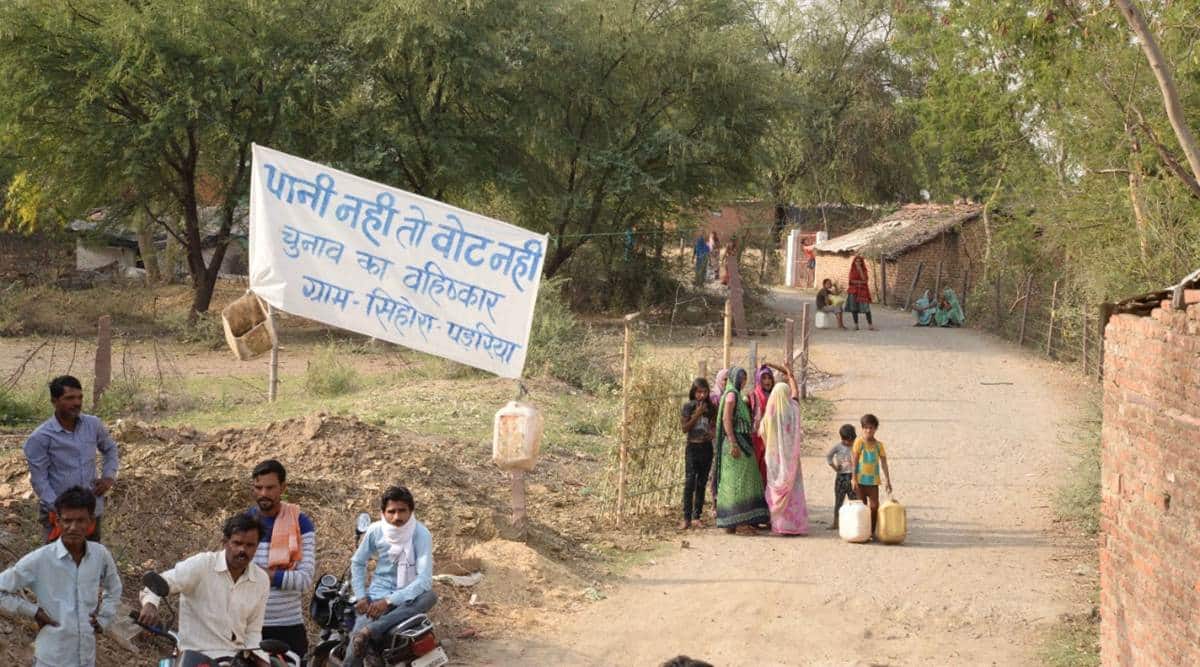 DAYS AHEAD of the bypoll in Damoh on April 17, parched villages that form part of this constituency in Bundelkhand belt of Madhya Pradesh have managed to get a primary demand fulfilled, although temporarily. For the past three days, rivals BJP and Congress have been sending in water tankers to several of these villages, where people walk or cycle long distances to fetch water.

This came days after many of the villages made it clear to the political parties their condition: no water, no vote.

In fact, villagers of Padriya have also put up a banner – ‘Paani nahi toh vote nahi’ – along with two empty plastic containers. Earlier this week, when BJP candidate Rahul Singh Lodhi visited the village to campaign, he was gheraoed and turned away.

Relief followed soon – the water tankers. But the villagers of Padriya know it may not last longer than the elections. “It’s because of the election that BJP sends the water tanker in the morning, and the Congress in the evening. I’m unable to decide for whom I should vote. After election, the tankers will again stop coming,” says Rekha Ahirwar.

For her, the water tankers have come as a respite from the routine task of waking up in the middle of the night and cycle two km to fetch water in plastic containers for her family of four.

Water has been one of the top concerns for the people of Damoh, and figures prominently in the BJP campaign. While the party has promised development, Chief Minister Shivraj Singh Chouhan has held a series of meetings with community leaders, promising piped water in the constituency. He has also reminded them of Rs 700 crore sanctioned for drinking water project in the region.

It is the promise of development that is swaying several voters such as Manish Aggarwal, who runs a mobile repair shop, towards the BJP. He says Lodhi won the previous election – as a Congress candidate – only because people wanted change from Jayant Malaiya, BJP veteran and former state minister, who earlier held the seat. “But sadly nothing changed,” says Aggarwal.

“But there is no point wasting your vote on a Congress candidate. Although the Congress might have a better candidate, with the BJP government at the Centre and in the state, it is better to vote for the BJP if one hopes for development,” he says.

The bypoll in Damoh was necessitated after Lodhi defected from the Congress and joined the BJP in October 2020. This time, he is in the fray along with Congress’s Ajay Tandon and at least 20 other candidates.

Many believe it will be a tough fight for Lodhi, who won with a slender margin of 768 votes last time. Apart from the rival parties high-pitch campaign, he is believed to be facing a challenge within the BJP. Malaiya, who has considerable influence in the constituency, is said to be upset with his party for denying his son Sidharth the ticket.

Apart from this, the BJP candidate is facing a challenge from his cousin Vaibhav Singh Lodhi, who is contesting the elections as an Independent, who may cut into his caste votes. Caste is a prominent factor in elections in Bundlekhand region.

Many traditional BJP supporters such as Nitesh Jain feel that voting for Congress is the best way to teach turncoats like Lodhi a lesson. “Last time around it was not Lodhi who won but it was a vote against Malaiya that brought him to power. Now he [Lodhi] has sold himself and needs to be taught a lesson,” says Jain.

“We are facing election [in these Covid times] because of him and this will be followed by a harsh lockdown. How will traders like me survive.”