Besides Assam, BJP candidates took a clear lead in both seats of Tripura, two seats in Arunachal Pradesh, and one in Manipur. The BJP and its regional allies are set to win a lion’s share of seats in the Northeast, leading in 17 of 24 seats in the seven states of the region by late Thursday. These include nine of Assam’s 14 seats. Besides Assam, BJP candidates took a clear lead in both seats of Tripura, two seats in Arunachal Pradesh, and one in Manipur.

Ally National People’s Party (NPP), headed by Meghalaya Chief Minister Conrad Sangma, surged ahead in one (Tura) of the state’s two seats, and another ally Mizo National Front (MNF), headed by Mizoram CM Zoramthanga, won the lone seat in the state. In Nagaland’s only seat, BJP ally NDPP is leading.

Late Thursday night, Congress candidates were leading in only three seats in Assam, and one in Meghalaya.

Himanta Biswa Sarma, Assam minister and convenor of the North-East Democratic Alliance, the BJP-led alliance of political parties in the region, told The Indian Express, “We have won in the Northeast because Prime Minister Narendra Modi has developed the region very methodically. People here have realised there is a PM who really cares for the Northeast — that is why this overwhelming support (has come).”

Another important reason for the NDA’s victory, he said, is the BJP’s “capacity to work with its regional allies — the BJP is the world’s largest political party, yet we are working with regional parties which, say, have influence over a district or a particular region.” Earlier this year, the region was rocked by intense protests against the BJP due to its pledge to implement the Citizenship (Amendment) Bill [CAB], which proposes to make non-Muslim minority immigrants from Bangladesh, Afghanistan and Pakistan eligible for Indian citizenship through comparatively relaxed norms. Large sections of the society in the region consider the proposed law to be detrimental to the interests of the indigenous people of the Northeast. 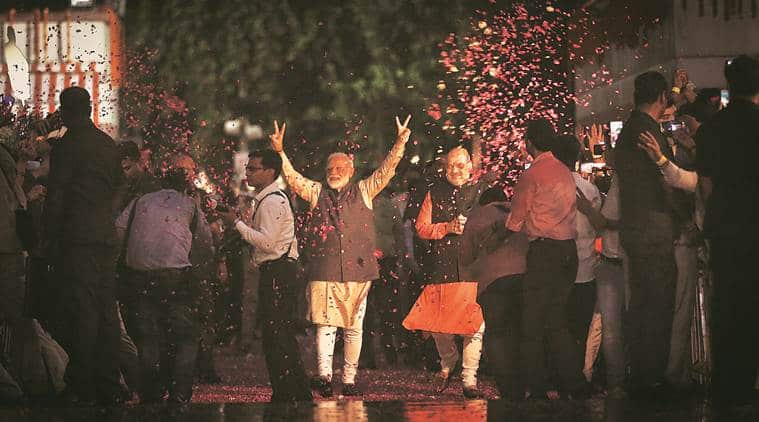 Thursday’s victories indicated that the BJP has overcome the opposition in Assam’s Brahmaputra Valley region, and persistence with the Bill helped consolidate votes in Barak Valley, where the proposal enjoys support. The BJP was leading in upper Assam’s Dibrugarh, which saw massive agitation against the Bill, as also in Barak Valley’s Silchar — where sitting Congress MP Sushmita Dev was trailing — and Karimganj.

Sarma said: “A lot of negative things were said about our party and our leadership on the citizenship Bill. While overcoming that, we had to ensure that we are not compromising with our core believes, values, ideology.. Many people thought we will lose because of the CAB, but when the final results are out you will see…CAB consolidated our votes.”

In Assam, political observes said, the BJP benefitted from infrastructure projects such as the Dhola-Sadiya bridge and Bogibeel bridge — two of India’s longest river bridges inaugurated in the state in the last five years — several welfare schemes aimed at tea tribe voters, and a consolidation of votes of the Bengali-speaking Hindu community. The Congress was leading in three seats of Assam as of late Thursday, while AIUDF chief and sitting MP from Dhubri was ahead in that constituency. The AGP, the BJP’s ally in Assam government which had walked out of alliance over the CAB issue and then returned, did not manage a lead in the three seats it contested.

In 2014, the BJP had won seven seats in Assam, and the Congress and the AIUDF got three each. Independent candidate Naba Sarania was leading in Kokrajhar LS constituency, where he is the sitting MP.

According to tentative results, Congress’s vote-share in Assam increased from 29.9 per cent to about 35.3 per cent as of Thursday evening. The BJP’s vote showed a slight decline — it was tentatively 35.61 per cent, against 36.86 per cent in 2014.

Assam Congress spokesperson Rhituporna Konwar told The Indian Express, “We had won three seats last time and had expected more this time. But this is a Parliamentary democracy and we accept the people’s verdict. Winning and losing are part of it (democracy).”