Each of BJP’s seven candidates got more than 50%, suggesting that a tie-up between its rivals would not have mattered; Cong pulls ahead of AAP in five seats 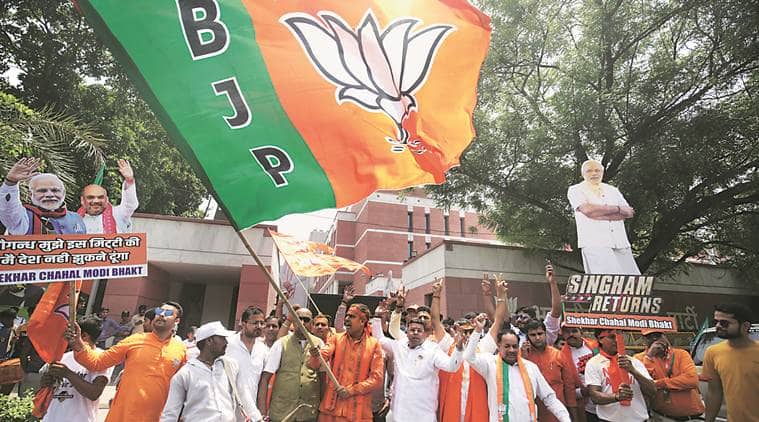 For two months, conversations — and headlines — around AAP and Congress revolved around whether the two parties will tie up in the capital. Thursday showed it wouldn’t have mattered. With a 56.56% vote share for the party and at least 53% for each individual BJP candidate in the city, no seat combination between AAP and Congress would have worked.

With BJP taking pole position in all seven seats, perhaps a bigger worry for AAP turned out to be the Congress, which got 22.5% of votes in Delhi, above AAP’s 18.1%. This is the first time since AAP was formed that Congress secured more votes — be it in Lok Sabha, Assembly or MCD polls. While Congress came in second in five seats, AAP stood second in two — South Delhi and North West Delhi.

Three AAP candidates — Pankaj Gupta from Chandni Chowk, Brijesh Goyal from New Delhi and Dilip Pandey from North East Delhi — lost their deposits as their vote share was less than 16.6%.

“This is a national election and it was amply clear in the minds of voters. The Congress also created a lot of confusion. This, along with what can only be called a Modi wave, sealed the elections,” Deputy Chief Minister and AAP political affairs committee member Manish Sisodia told The Indian Express.

For the BJP, what worked was a lack of clear messaging from other parties, a campaign that relied on a door-to-door outreach, booth-level management, and the Prime Minister’s name, Leader of Opposition in Delhi Assembly Vijender Gupta said. “Our campaign was very well-oiled, with no internal rifts. We fought the election ground up. We took Modi ji’s message to people and they saw how he had taken decisive action on sensitive issues. Others only had an anti-Modi campaign,” he told The Indian Express.

Thursday’s closest competition was seen in Chandni Chowk, where BJP’s Dr Harsh Vardhan won, defeating Congress’s JP Agarwal by over 2.28 lakh votes. The biggest margin was in West Delhi, where Parvesh Sahib Singh won by a margin of 5.78 lakh votes.

AAP, which came into existence in 2012, had in the 2015 Assembly elections reduced Congress’s vote share to 9.7%. It had won 67 of 70 seats, while BJP won 3 and Congress 0. In every subsequent election, Congress has inched back while AAP’s vote tally has gone down.

Senior AAP leaders conceded that gains made by Congress could have serious implications for their party as the city heads into Assembly polls in less than nine months.

“During our surveys, we realised people were inclined to vote for Modi in these elections and Kejriwal in Assembly polls… But the senior leadership has to realise that during 2014 Lok Sabha polls, we were in second place. Nine months is a long time and the resurgence of Congress is troublesome,” said a senior party leader.

Sisodia, however, said the party was confident they would regain the lost vote share next year. “Considerations in Lok Sabha and Assembly polls are different and people in Delhi have shown this in the past. We will bounce back from this,” he said.