Rahul Gandhi, who spoke after Stalin, said the state was “witnessing a full-scale attack on Tamil language, culture and history” by the BJP ruling at the Centre. 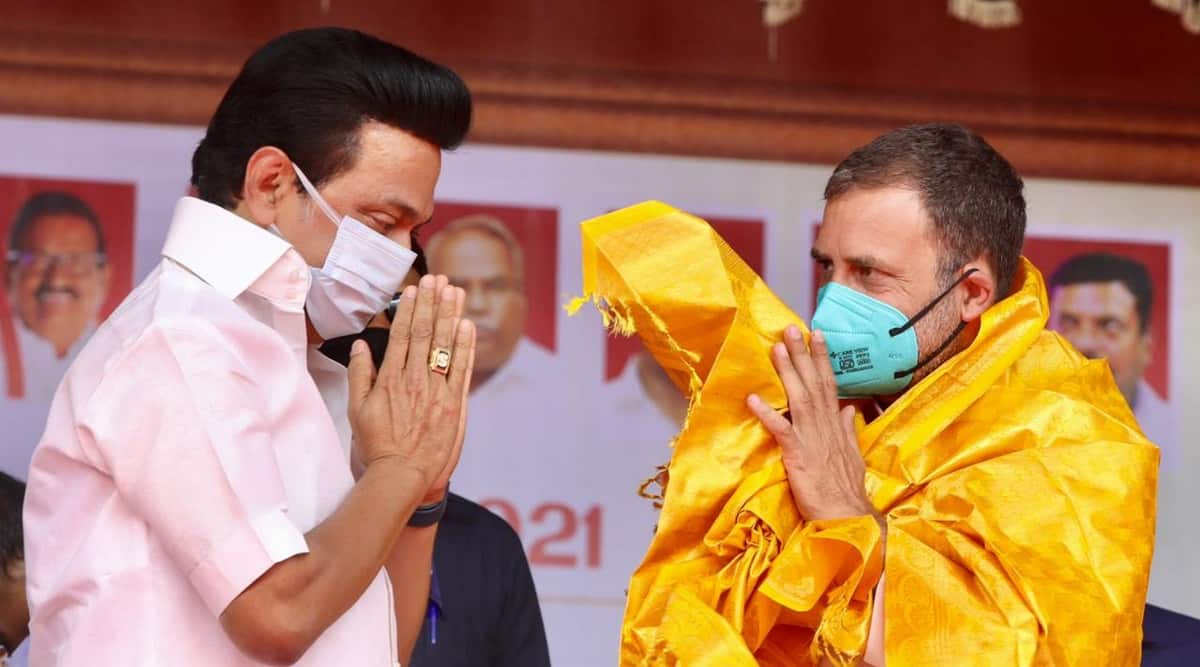 During a rally organised by DMK and its alliance partners at Salem in Tamil Nadu on Sunday, DMK chief M K Stalin appealed to Rahul Gandhi to be the leader of opposition parties to put up a “united fight against the fascist forces at the Centre”.

“I have a humble and heartfelt request for Rahul Gandhi today. India is being destroyed by a fascist government now. You have the responsibility to protect India at this time. Be it the Assembly polls or Lok Sabha elections, the united secular front in Tamil Nadu has always put up a strong resistance to the BJP. The same thing is going to happen again this time,” said Stalin at Salem, which has been a traditional stronghold of AIADMK.

“Only 37% of people had given BJP the mandate to form the government. This means that 63% of people voted against the BJP. I request you to take the leadership of a united front against BJP, come forward and show the way,” said Stalin, reminding the people that everyone who votes for DMK will be also voting to make him the Chief Minister of the state.

With a few days left for the polls, this was the first rally in which Gandhi and Stalin shared a stage. Congress is contesting 25 seats in the alliance. The party expects to do better than 2016 — while it had won only 8 of the 41 seats it had contested back then, it is targeting a victory in over 15 constituencies this time.

Gandhi, who spoke after Stalin, said the state was “witnessing a full-scale attack on Tamil language, culture and history” by the BJP ruling at the Centre.

“Today we wear masks everywhere. When you wear a mask, it is difficult to be recognised. Similarly, AIADMK is a party wearing a mask. If you take off the mask, you will find that it is not AIADMK but RSS and BJP are behind the mask. The old AIADMK is gone and it is now a hollow shell that is controlled by RSS and BJP.”

“The people of Tamil Nadu have to be careful. They have to understand what is behind their mask,” Gandhi added, accusing CM Edappadi K Palaniswami of “falling at the feet of Narendra Modi and Amit Shah when no Tamil would like to touch the feet of Modi or Shah or Mohan Bhagwat”.

“Palaniswami is corrupt and he has to do it because PM Modi controls ED, CBI and the central agencies,” Gandhi said.