A battle royale, fought over 15 long years, comes to an end as a prince and a princess — grandchildren of the legendary Rajmata Gayatri Devi — get back the Jai Mahal Palace Hotel from their step-uncles.
Prakash Bhandari reports. The grandchildren of the late Maharani Gayatri Devi and Maharaja Sawai Man Singh II of Jaipur will finally get back the luxurious Jai Mahal Palace Hotel from their step-uncles.

While the grandchildren, Devraj Singh and Lalitya Kumari, are half-Thai and half-Indian, they have acquired the status of persons of Indian origin.

The brother and sister, who live in Bangkok, are the offspring of the late Jagat Singh, Maharaja Sawai Man Singh II and Maharani Gayatri Devi’s only son.

Jagat Singh was married to Priyanandna Rangsit, a Thai princess. They lived in London along with their children, Devraj and Lalitya.

The royal couple divorced after a few years and Priyanandna and her children moved back to Bangkok.

After his demise, Priyanandna fought to ensure her children — as his legal heirs — got their legitimate share in the properties of their late father.

In 1956, Maharaja Sawai Man Singh II, who was the last maharaja of Jaipur, had gifted his son Jagat the Jai Mahal Palace, also known as the Nataniyon Ka Bagh.

Jagat, who was the maharaja’s fourth son — Sawai Man Singh had one son and one daughter from his first wife and two sons from his second wife; Gayatri Devi was his third wife — was the sole owner of the property. The late Jagat Singh had constituted a firm, Jai Mahal Hotels Pvt Ltd, in 1981 and held 99 percent of the share capital.

One per cent of the shares were held by his step-brother Prithvi Raj — the maharaja’s third son, born to his second wife, Maharani Kishore Kunwar — and his son Vijit Singh who managed the affairs of the hotel since they were living in Jaipur. While Prithvi Raj held 45 equity shares, the rest were held by his son.

“The late Jagat Singh had a 99 per cent paid-up capital in the Jai Mahal Palace and the late Prithvi Raj had only a one per cent stake in the property. But Prithvi Raj and his son, by ‘overt and covert acts’ became the majority owners,” says Abhishek Rao, Devraj and Lalitya’s lawyer.

Another interested party was Prithvi Raj’s elder brother Jai Singh, who was given the title of Raja of Jhalai by his father. He threw his support behind his younger brother.

When she heard about this, a shocked Priyanadna decided to take up the issue with Prithvi Raj and his son.

She travelled to Jaipur and began collecting the relevant documents with the help of Jagat’s stepbrother, Lieutenant Colonel Bhawani Singh (retd), Mahavir Chakra, then the maharaja of Japiur.

The late Lieutenant Colonel Bhawani Singh was the eldest son of Maharaja Sawai Man Singh II, born to his first wife, Maharani Marudhar Kunwar. He had an elder sister, Prem Kumari, who was married to the maharawal of Baria. He passed away on April 17, 2011.

Maharaja Bhawani Singh was sympathetic towards his step-nephew and step-niece’s cause and supported them in their long legal battle against their step-uncles and step-cousin.

Jagat Singh, after forming the company, had given the Tata Group’s Indian Hotels Company Limited the contract to run the property as a hotel.

Prithvi Raj — who had just one per cent share in the company — ousted his step-nephew and step-niece from their inheritance.

Devraj and Lalitya then took up the shareholder’s issue in Jai Mahal Palace Hotels Pvt Ltd with the National Company Law Tribunal.

“In the earlier round of litigation, which related to the transmission of Jagat Singh’s shares, both the high court and the Supreme Court decided in favour of our clients and directed that the shares be transmitted to them,” says the grandchildren’s lawyer Abhishek Rao.

“The Supreme Court held that the succession certificates duly issued by the district court in Jaipur in favour of our clients and Rajmata Gayatri Devi as successors of Jagat Singh ‘had to be acted upon’,” Rao adds. In the earlier round of litigation, the Supreme Court had accepted the duly-issued succession certificates whereby Devraj, Lalitaya and Rajmata Gayatri Devi were declared as Jagat Singh’s heirs.

But the will was disputed by Jagat Singh’s stepbrothers, Prithvi Raj and Jai Singh.

This disputed will was abandoned by Rajmata Gayatri Devi in her lifetime and so, it was said, the dispute no longer existed.

The step-uncles, however, contended that the will was still in dispute and the matter, thus, could not be decided by summary jurisdiction under Section 111 of the Companies Act, 1956.

Rejecting this contention, and keeping in mind that Rajmata Gayatri Devi had settled the disputes about the will with her grandchildren, the Supreme Court judged that the will was not in dispute and the companies must ‘act upon’ the succession certificates issued to Devraj and Lalitaya as successors of their father, Jagat Singh.

After this ruling, the National Company Law Tribunal’s Delhi bench allowed Devraj and Lalitaya their due right on August 1, 2018.

The tribunal observed that Jagat Singh was the exclusive owner of Jai Mahal and that, after his demise in 1997, Prithvi Raj took full control of the company that owned the palace.

He denied Jagat Singh’s children their rightful ownership of the shares as well as an opportunity to participate in the affairs of the company by insisting on a succession certificate with a view to delaying their succession to the property of their father.

The National Company Law Tribunal also observed that Prithvi Raj conspired to convert their shareholding of 99 per cent into a minority.

It also ordered that the board should be constituted with Devraj Singh and Lalitya Kumari.

The National Company Law Tribunal penalised Prithvi Raj to the tune of Rs 10 lakh (Rs 1 million) for using unfair means in the transmission of the shares.

Jai Singh, Prithvi Raj and his son, Vijit, then went to the National Company Law Appellate Tribunal (NCLAT) to challenge the order. In the second round of litigation at the NCLAT, the step-uncles questioned the maintainability of the petition filed by Devraj and Lalitya Kumari.

The NCLAT, on March 12, 2020, set aside the NCLT order and it looked like Gayatri Devi’s grandchildren would lose their claim.

“In its order, the appellate court (NCLAT) has clearly stated that post Jagat Singh’s death on February 5, 1997, Rajmata Gayatri Devi became his sole legatee by way of his ‘will’ written in the year 1996. Hence, Devraj and Lalitya cannot claim the inheritance of his original shares in the company as his legal heirs as they got the succession certificate on the basis of the settlement arrived in 2008 with Rajmata Gayatri Devi,” says Sanjib Sen, the lawyer for the step-uncles.

“The appellate court order stated that — as per the earlier findings of the Supreme Court in this matter — Rajmata Gayatri Devi was the sole ‘legatee’ and refused to company’s offer to purchase additional shares. As she bequeathed her rights in settlement to her grandchildren, they cannot claim their right of inheritance to the original shares as Jagat Singh’s legal heirs. They cannot also claim additional shares of the company,” Sen added.

“We filed an appeal in the Supreme Court against this perverse judgment by the NCLAT,” says Abhishek Rao, the grandchildren’s lawyer.

The Supreme Court directed the various stakeholders to explore the possibility of an amicable resolution of the various disputes amongst members of the royal family that were being contested in various courts.

A settlement was arrived at on December 15, thus ending the 15-year-long legal battle. Jai Singh and Vijit Singh agreed to hand over the Jai Mahal Palace Hotel to Devraj Singh and Lalitya Kumari.

The brother and sister are now the sole owners of this majestic property, which continues to be run as a hotel by the Tata Group. 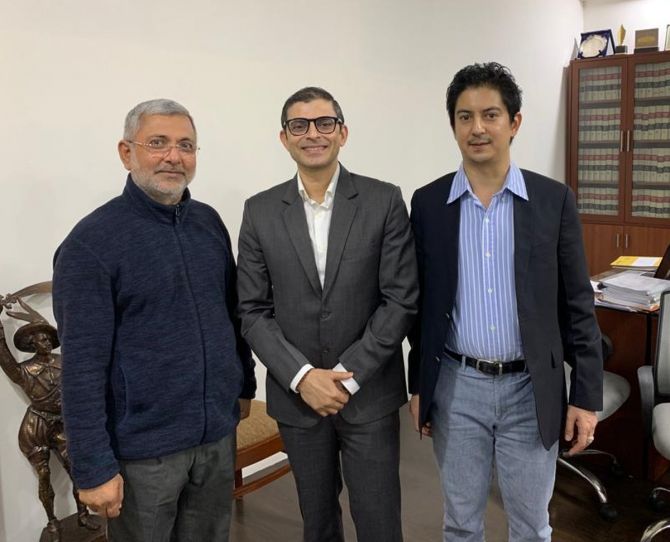 Justice Joseph presented the documents relating to the amicable settlement before the Supreme Court, which accepted it and passed the order that would be binding on all the stakeholders.

Under the terms of the settlement, Devraj Singh and Lalitya Kumari shall forego their shares in the Rambagh Palace Hotel — for which they had filed a case against Jai Singh and Vijit Singh. This hotel, which is also run by the Tata Group, is considered a prime palace hotel in the world.

In return, Jai Singh and Vijit Singh would hand over their shares in the Jai Mahal Palace Hotel to Devraj and Lalitya, free of all encumbrances.

The Rambagh Palace Hotel will pay an agreed-upon compensation — running into several million rupees — to Devraj Singh and Lalitya Kumari for foregoing their shares in this majestic property.

Thus, the members of Jaipur’s royal family ended their dispute for property estimated to be worth Rs 15,000 crores (Rs 150 billion).

“I am happy with the settlement. After this, we will be able to get control of the Jai Mahal Palace,” says Devraj Singh.

“I am thankful to my step-uncles and my step-cousin for consenting to the settlement, which is in the best interest of the stakeholders,” Devraj Singh adds.

Devraj’s mother — who is in Bangkok at present — will come to Jaipur to help her children regain their shares in the hotel.

“I am happy that, after such a long litigation, the various stakeholders decided to come to an amicable settlement. I am thankful to the late Prithvi Raj, Jai Singh and Vijit Singh for this settlement. Now, my children can live in peace,” says Priyanandna from Bangkok.

“I shall always be grateful to the late Maharaja Bhawani Singh for all his help and moral support that enabled my children to get their legitimate dues.” 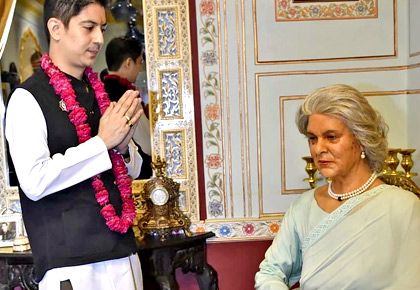