The Top Videos of the Week, listed by Shailajanand Mishra. 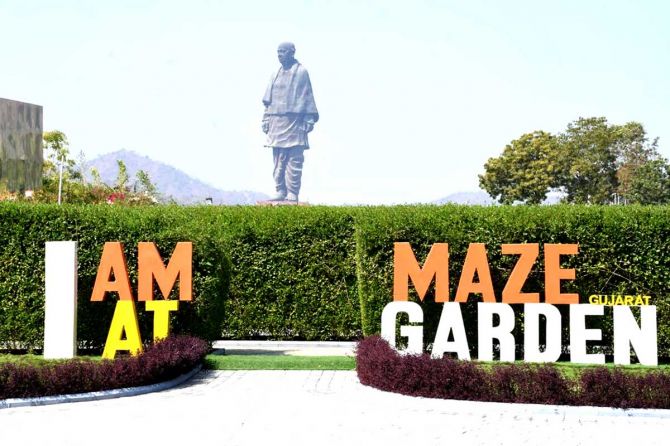 Paying in coins while buying a new bike.

The 70 year old who topped the civil engineering diploma exam.

Just some of the videos in our weekly round-up, chosen by you, through your likes on iShare.

The majestic Statue of Unity — a grand tribute to Sardar Vallabhbhai Patel — is a major tourist destination.

And the government keeps adding new attractions to ensure it remains so.

The latest is the maze garden, developed in a short span of just eight months.

Using 1,80,000 saplings, a garden has been built in the shape of Yantra that is said to emanate positive energy.

The creators have opted for the Miyawaki method, through which a forest can be developed in just two to three years.

Situated around 45 km away from Udaipur, in Rajasthan’s Nathdwara town, the statue has been built by the Tat Padam Sansthan.

Would you pay Rs 50,000 in coins to buy a bike?
Location: Karimganj

That’s exactly what Suranjan Roy did.

A resident of Assam’s Karimganj, he had saved up what he could — it turned out that coins were all he could save — to purchase his dream bike.

He set down a jingling bag worth Rs 50,000 as down payment and is now happily vrooming around town.

In an ugly consequence during a family dispute in Thiruvananthapuram, a 12-day- old baby was separated from its mother.

A female police officer, Ramya, stepped to the infant’s rescue and breastfed the child.

The officer was honoured by Justice Devan Ramachandran for going above and beyond the call of duty.

The flap of hundreds of wings; the darkening of the sky.

And, as they do every year, migratory Siberian birds flocked to the Triveni Sangam in Prayagraj, Uttar Pradesh.

Ready to welcome them, and capture their beauty on their mobile phones, were thousands of waiting visitors.

Age, they say, is just a number.

Seventy-year-old Narayan Bhat proved that when he secured 94.88 per cent marks in the civil engineering diploma exam, conducted by the Karnataka board of technical examinations.

A street in Telangana turned into a cricket pitch for a brief moment as Rahul Gandhi, who is on the Bharat Jodo Yatra, turned bowler for a young batter in a Team India jersey.

For the Congress leader, it was a break from politics.

For the young cricketer, it was a memory of a lifetime.

And that’s what the Central Industrial Security Force did when two of their canine staff members, who were working at Cochin airport, retired.