With the maximum dose gap of four months for Covishield, a large part of the population would not even be eligible for the second dose by the end of this year, report Ruchika Chitravanshi and Ishaan Gera. 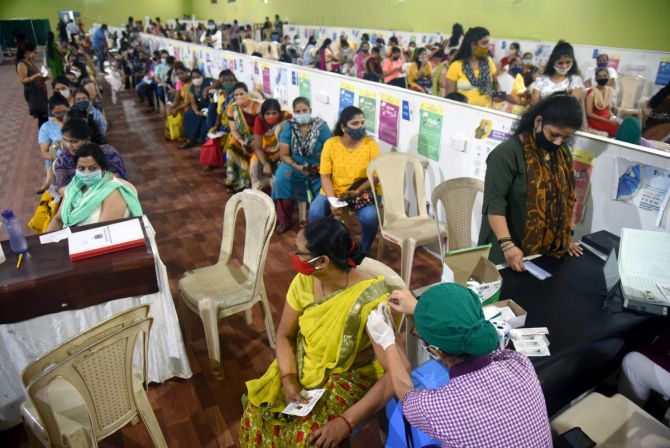 India would be able to vaccinate its entire adult population by November this year with at least one dose of the Covid vaccine if it keeps up with an average pace of 5.6 million doses administered daily. This average was achieved for the week ended September 17, which was Prime Minister Narendra Modi’s birthday, when a record 25 million doses were administered in the country.

However, excluding the exceptional day, the weekly average number of first doses being given daily till a day before —  September 16 — was around 4.3 million. At this pace, vaccination with double dose can extend up to April 2022. At this rate, single-dose vaccination for the eligible population would be completed by early December.

While 65 per cent of the adult population has so far received its first dose of the vaccine, 23 per cent has been completely vaccinated. With the maximum dose gap of four months for Covishield, a large part of the population would not even be eligible for the second dose by the end of this year.

Full vaccination, therefore, is possible three to four months after everyone has received the first dose. If the government decides to go ahead with vaccinating children (aged 12-18) from October, which will add another 160 million to the population, a single dose can be administered by the end of this year; full vaccination for all can take place till May 2022.

Public health experts have said that India should prioritise full vaccination of the vulnerable population. “Vaccine immunity will start weaning off in a few months. Two-dose vaccination of the vulnerable and those in higher age groups of over 45 should be prioritised. Then we can work our way down, and rest will have some level of protection with a single dose as well,” said K Srinath Reddy, president, Public Health Foundation of India.

Health experts believe that many in India have acquired immunity through natural infection, even though it may not last long.

However, unless a new variant with vaccine-evading abilities or high infectiousness comes into play, the population is well protected for the next few months.

As for a booster shot to help with the reducing immunity level, the jury is still out. “Scientific evidence for a booster dose is still building up. The FDA review committee said that they don’t have enough data for safety in the younger population. The risk-benefit analysis has to be carefully done,” Reddy added.