Modi also made a veiled reference to China’s Belt and Road Initiative, saying while creating structures for “maritime connectivity”, countries should keep “financial sustainability” and absorption capacity of the host countries — a clear reference to Beijing’s debt-trap diplomacy in recent years. 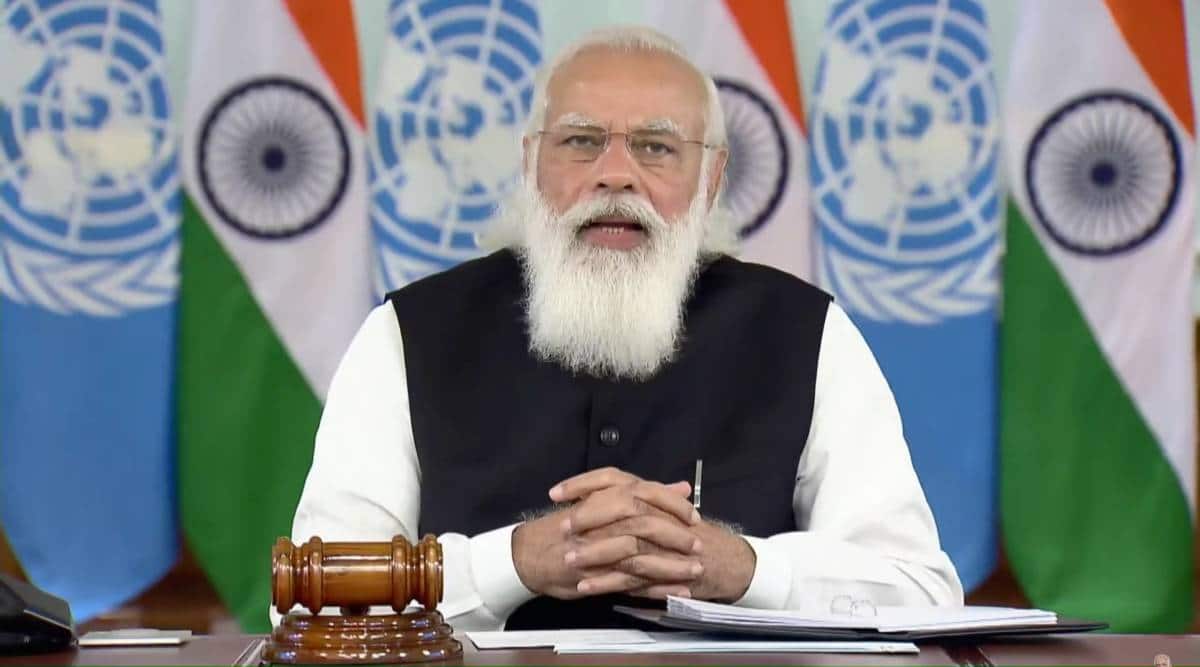 In a signal to China, Prime Minister Narendra Modi, citing India’s maritime boundary settlement with Bangladesh, told members of the United Nations Security Council Monday that maritime disputes should be resolved peacefully and as per international law.

Addressing UNSC members as the council president for the month of August, Modi also made a veiled reference to China’s Belt and Road Initiative, saying while creating structures for “maritime connectivity”, countries should keep “financial sustainability” and absorption capacity of the host countries — a clear reference to Beijing’s debt-trap diplomacy in recent years.

A presidential statement was adopted at the end of the first standalone discussion on “maritime security” which flagged the “primacy of international law” — UN Convention on the Law of the Sea or UNCLOS is the legal framework applicable to activities in oceans, including countering illicit activities at sea.

Sources said the process was not smooth, with one P-5 country (China) holding out till the very end on the language related to the UNCLOS.

India’s negotiators were able to find language acceptable to all, without dropping reference to UNCLOS — other P-5 countries insisted on retaining it.

The final statement said: “The Security Council reaffirms that international law, as reflected in the United Nations Convention on the Law of the Sea of 10 December 1982 (UNCLOS), sets out the legal framework applicable to activities in the oceans, including countering illicit activities at sea.”

In his remarks, Modi said: “Maritime disputes should be resolved peacefully and in accordance with international law. This is extremely important for promoting mutual trust and confidence, and ensuring global peace and stability.”

“We need to promote responsible maritime connectivity. It is well understood that creation of structure is necessary to boost maritime trade. However, in such infrastructure projects, it is important to pay attention to fiscal sustainability and absorption capacity of the host countries. For this, we should develop appropriate global norms and standards,” he said.

In their statements, the US and France mentioned the South China Sea — China objected to the reference, the UK referred to the Indo-Pacific, and Russia was careful to not mention them.

Without mentioning China, US Secretary of State Blinken called out “dangerous encounters” and “unlawful maritime claims” in the South China Sea and expressed concern on “actions that intimidate and bully” other countries.

“We have seen dangerous encounters between vessels at sea, and provocative actions to advance unlawful maritime claims. The United States has made clear its concerns regarding actions that intimidate and bully other states, lawfully accessing their maritime resources. And we and other countries including South China Sea claimants have protested such behaviour, and unlawful maritime claims in the South China Sea,” Blinken said.

Vietnam’s Prime Minister Pham Minh Chinh also flagged the situation in South China Sea, and said disputes should be settled through peaceful means, in line with international law, diplomatic and legal processes, and “ensure the freedom safety, security, freedom of navigation and overflight, without resorting to acts that would complicate a situation or create tension in the region”.

Addressing India which had called for the session, China’s Dai, who spoke towards the end of the session, said, “Mr President, I wish to point out that the (UN) Security Council is not the right place to discuss the issue of South China Sea. The United States just mentioned the South China Sea issue, and China firmly opposes this act.”

Referring to US and India, Dai said: “A few countries are pursuing exclusive regional strategies in the Asia Pacific region and attempt to create and intensify maritime conflicts, undermine the sovereignty and security interests of relevant countries, and weaken regional peace and stability. This runs counter to the aspirations of most countries in the region to seek peace, cooperation and development.”

French Minister Le Drian said: “We would like to remain extremely attentive to all these situations in over tensions in the South China seas”. France is working in different regional fora to assist its partners to strengthen their ability to ensure the control and security of maritime bases, he said.

UK Defence secretary Wallace said UNCLOS applies to all the oceans, and all the seas. “It is not an a la carte option for some States to pick and choose, as they wish. Like India, the UK has a vision for a free, open and secure Indo Pacific,” he said, in a signal to Beijing.

Putin, however, did not mention South China Sea or the Indo-Pacific, and articulated a much nuanced position. “Russia promotes strict adherence to key norms and principles of international law enshrined in the UN Charter, such as respect for sovereignty, non-intervention in the internal affairs and settling disputes through dialogue. I hope that participants of our deliberation will concur with my saying that the UN principles must be observed in peaceful and responsible use of maritime spaces,” he said, aiming at the US’s Indo-Pacific strategy.