Against a demand of 8,462 metric tonnes (MT) of oxygen calculated on basis of active cases, an allocation of 8,410 MT has been made for 22 high-burden states, the affidavit states. 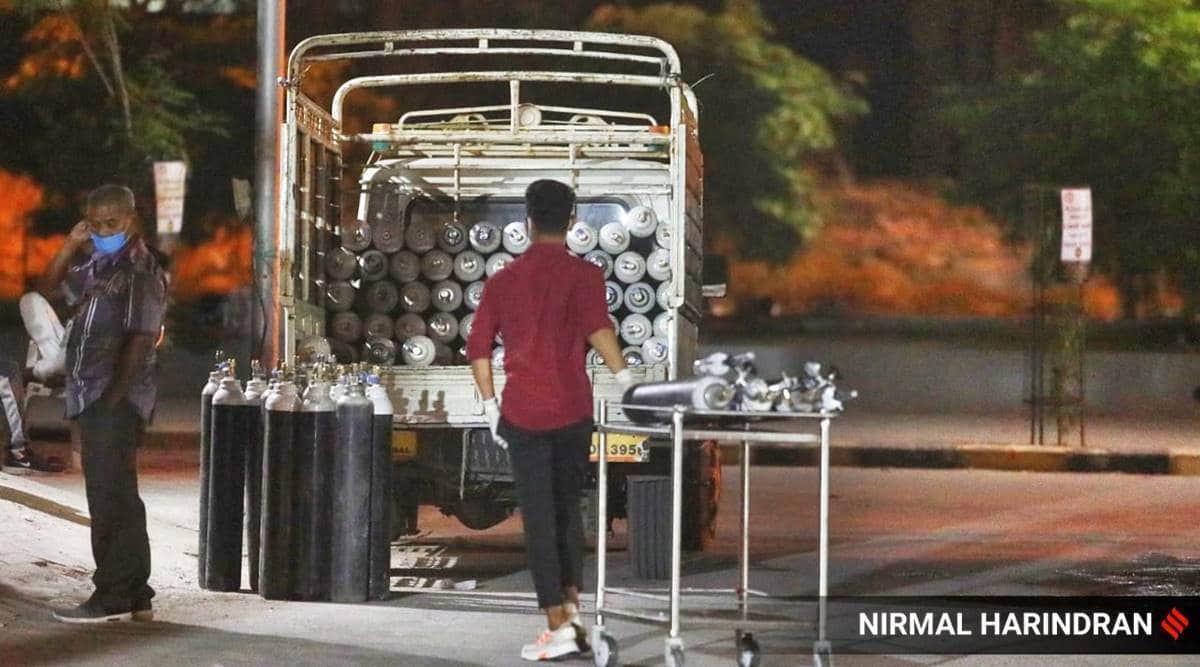 THE CENTRAL government in an affidavit filed before the Gujarat High Court Monday, in response to a suo motu PIL that the court is hearing on Covid-19, has submitted that not only is it augmenting oxygen supply within India, but also “importing oxygen from other countries using not only the diplomatic channels but also personal intervention of the political executive.”

Against a demand of 8,462 metric tonnes (MT) of oxygen calculated on basis of active cases, an allocation of 8,410 MT has been made for 22 high-burden states, the affidavit states.

Calculations based on data provided in documents annexed to the affidavit filed by Additional Solicitor General Devang Vyas, suggest at least seven of the high-demand states have been provisioned with only 60 per cent or even less as daily allocation of oxygen vis-a-vis the demand projected for May 5 as per the central government-appointed Empowered Groups (EG). The states include Kerala, Rajasthan, Chhattisgarh, Tamil Nadu, Bihar, Jharkhand and Jammu and Kashmir. Kerala has been provisioned only 22 per cent of its projected demand as daily allocation as per the April 30 supply plan.

A data table in the affidavit suggests six states and Union Territories have lifted more oxygen on April 26 than what was allocated. These include Punjab, Tamil Nadu, Kerala, Rajasthan, West Bengal, and Jammu and Kashmir. Punjab, in fact, saw a reduced allocation from April 28 onwards despite lifting more than its allocated amount of 177 MT on that day.

The Centre, in its affidavit, also submitted that while oxygen demand is a “dynamic figure”, it is revised as per requirement and available supplies to match states’ demand and sourcing of oxygen to the “maximum extent possible”.

Referring to the methodology the Centre uses to arrive at projected demand of oxygen by states, the affidavit states an ‘Empowered Group-I’, comprising Niti Aayog’s Dr V K Paul, AIIMS Director Dr Randeep Guleria, and Director general of ICMR Dr Balram Bhargava, “on the basis of their Covid management experience and examination of the facts and reports received from the various state hospitals and medical institutes of the country categorised Covid-19 patients in three broad classes where it was determined that 80 per cent patients are “mild cases” and do not require oxygen. Three per cent of cases are severe ICU cases, which require “approximately 24L/min of oxygen”, and another 8.5 per cent cases may require oxygen at the rate of 10L/min.

Based on these estimates, the oxygen requirements of different states, on the basis of their active cases, is being calculated, “which in the estimates of the central government at present is around 8,462 MT”.