“I like to pretend that I’m the most attention deficit disordered person I’m ever going to meet,” Prose said. “I’m very conscious of keeping the reader’s interest. And I’m easily bored — I’m easily bored by books, I hate to say." By Elizabeth A. Harris

During her nearly 50-year career, Prose has published 30 books along with reams of essays, reviews, columns and travelogues on subjects as diverse as Anne Frank, Peggy Guggenheim, Caravaggio and bacon. And while her work deals in weighty themes like truth, identity and power, even when she’s writing about breakfast foods, she is not precious about it.

“I hate the word process, I just can’t bear it,” Prose said in an interview. “People say, ‘What’s your process?’ My process is allowing my soul to leave my body and enter into the body of another human being. So try that!”

Her latest novel, “The Vixen,” which will be published Tuesday by Harper, is a good example. It is about Ethel and Julius Rosenberg, the CIA and book publishing. And it is often hilarious.

“We have to entertain ourselves somehow,” she said.

The novel, her 22nd, is set in the mid-1950s and follows Simon Putnam, a Jewish guy from Coney Island who has graduated from Harvard University with a degree in folklore and mythology. Rejected from graduate school, where he hoped to study stories about Vikings, Putnam lands a job at publishing house Landry, Landry and Bartlett, where he reads and responds to unsolicited manuscripts with names like “The Count of Monte Christmas,” “Tears in the Apple Pie” and “The Laboratory Mice’s Revenge.”

One day, he is plucked from the slush pile by one of the company’s founders, Warren Landry (the sole Landry at Landry, Landry and Bartlett, despite the company’s name), to edit a book about Ethel Rosenberg, which depicts her as a nymphomaniac delighted to be spying for the Russians. Putnam, whose mother knew Ethel Rosenberg as a child, is horrified. But he also is ambitious.

“I like to pretend that I’m the most attention deficit disordered person I’m ever going to meet,” Prose said. “I’m very conscious of keeping the reader’s interest. And I’m easily bored — I’m easily bored by books, I hate to say. And so I want there to be some sort of suspense or some sort of payoff.”

She had wanted to write a novel about the Rosenbergs for 10 years and had 14 false starts at it. It was her mother who knew Ethel Rosenberg when they were schoolchildren on the Lower East Side, and like Putnam, Prose grew up as a Jewish kid in Brooklyn. (Her paternal grandmother shortened the family name from something much longer, Prose said. She didn’t know that “prose” was a word in English.)

“The Vixen” also includes some of Prose’s experiences in publishing in the early 1970s, like a “purely autobiographical” scene in which Putnam, an inexperienced drinker, stands up at the end of a boozy lunch and is caught by a waiter as he tips toward the floor. The novel is, in part, about the exploitation of the Rosenbergs, who were executed in 1953 for espionage, accused of spying for Russia as it tried to build itself an atomic bomb. (Prose said she often returns to how “historical tragedy has been turned into kitsch.”) The book itself, however, is respectful of them.

“It is the most difficult tone to write,” said John Guare, playwright, screenwriter and friend of Prose’s. “It’s a comic novel involving the Rosenbergs. How she maintains that tone, but it never veers into grotesquerie — you can’t imagine how technically difficult that is. And it doesn’t show.”

Prose describes herself as an “obscenely hard worker” but said her productivity is also a credit to her husband, Howie Michels. At the end of their first date in 1976, Michels, along with a husky named Serge, moved into the SoHo loft Prose was sharing with six other people. They’ve rarely been apart since.

Prose said they split the child care when their two sons, Bruno and Leon Michels, were growing up, but Michels, a painter by trade, does “everything else.” Once during a phone call, he used “Leonard Woolf” — the name of Virginia Woolf’s famously nurturing husband — as a verb. Michels said he’d spent a lot of time “Leonard Woolfing” his wife that day. He even chauffeurs her in their Volvo station wagon, since Prose, like many native New Yorkers, avoids driving.

When their sons were young, the family would move from place to place so that Prose could teach writing because, she said, “teaching would take up less time than worrying about money.”

Today, she teaches literature at Bard College, offering classes like “Ecstasy, Obsession and Oblivion” and “Totalitarianism in Literature,” and at the Eastern Correctional Facility through the Bard Prison Initiative. She and Michels live in Ulster County, about 35 minutes away from Bard, in a house stuffed with art and books. They are both obsessive gardeners, Prose said, locked in an ongoing battle with the local chipmunks. She spends about three hours a day tending cucumbers and tomatoes, pear and apple trees. She got carpal tunnel syndrome last year from shelling peas.

Michels is also Prose’s first reader — no small job, as she can easily go through 40 or 50 drafts of a novel.

From that working and reworking of every sentence comes a precision and a clarity to her writing that takes readers by the hand and gently guides them along.

“If it’s a really good day,” Michels said of Prose’s writing, “it’s like turning on the radio in her head.” 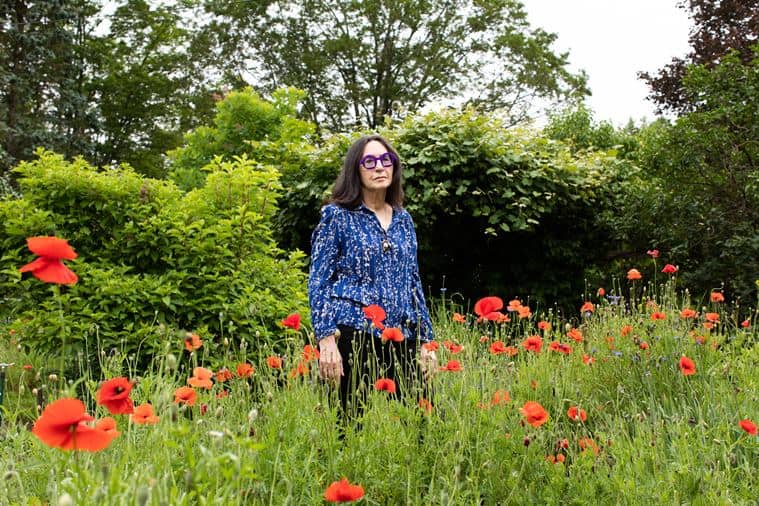 Her long career has not come without controversy. In 1998, Prose wrote an essay in Harper’s Magazine called “Scent of a Woman’s Ink” about how women writers were still being shunted aside by publications and awards. The essay so incensed various newspaper and magazine editors that Harper’s hosted a dinner with several of them so Prose could try to make amends.

After the 2015 attacks on satirical French magazine Charlie Hebdo, its staff received an award from free-speech foundation PEN. Prose, who used to be the president of PEN America, was excoriated for saying that while she supported the magazine’s right to publish what it wanted, it did not deserve an award for “drawing crude caricatures and mocking religion.” In 2018, she criticized a New Yorker short story for its similarities to another work of fiction.

“Often in these cases I think, OK, the truth about this is so patently obvious that everyone will just agree with me, and thank me for pointing this thing out that they hadn’t noticed for some reason,” Prose said.

Also, she added, “I would feel that I couldn’t not do it, and I don’t know where that comes from. It’s a kind of compulsion. A kind of emperor’s-new-clothes kind of thing.”

In addition to writing her novels and nonfiction, she has been a prolific art and literary critic — she’s written more than 100 book reviews for The New York Times alone. Author Michael Cunningham, a friend who meets Prose for weekly Zoom cocktails, said that if Prose didn’t write fiction, she would be “an important and prominent critic,” and that it is rare to find someone equally significant in both.

“She is such an important and significant figure, and you can talk to her about how much you love ‘Hacks,’” he said of the HBO Max comedy. “If that’s surprising, it’s probably because a lot of writers are not like that.”