‘The Rajapaksas have been in active politics for decades and survived many challenges, but they seem to have misread this one.’

“There is a curfew and images of military tanks coming into Colombo. Therefore, there is a worry of a growing military presence which doesn’t bode well for Sri Lankan democracy,” says Bhavani Fonseka, the well-known Sri Lankan constitutional and human rights lawyer.

“I’m not sure who is advising the president, but at this moment, he is seen as directly responsible for this crisis. He has no legitimacy in the eyes of the citizens to continue to hold onto power,” Bhavani Fonseka — who has a bachelor’s degree in law from the University of Bristol in the UK, a master’s in law from Denver University in the US and a master’s in public administration from Harvard — tells Rediff.com‘s Archana Masih in a phone interview from Colombo.

The first of a two-part interview discussing the uncertainty in Sri Lanka:

Were you surprised by the violence carried out by Mahinda Rajapaksa supporters on Monday? The protests against President Gotabaya Rajapaksa were largely peaceful and one would have thought that the Rajapaksas had given up their penchant for thwarting opposition to their regime. What was the provocation for the violence?

I was not entirely surprised. What surprised me was that the violence came so blatantly from the prime minister’s official residence. The message was that they were going to do anything to hold onto power.

But as you said, the protests — which started in March from the suburbs of Colombo — have been peaceful for several weeks.

Citizens peacefully came out on the streets calling for a system change and except for a few incidents, the protests went on peacefully for two months. But this week, it has changed considerably.

We saw violence against the peaceful protesters that led to violence across Sri Lanka in what seems to be in retaliation to the government. But there are questions now whether this is in some organised form. This is being looked into and we’ll have to see what transpires. But the violence has spread, unfortunately, despite the curfew and a state of emergency.

Was it a last ditch stand by Mahinda Rajapaksa and his supporters for being asked to resign as prime minister? Do you think they thought the violence would provoke a hard response from Gotabaya that could perhaps stall the call for Mahinda’s resignation?

The family was using various methods to hold onto power.

Now the president is holding on by using different tactics. The military is on the streets and there’s a curfew.

There is a worry that there may be more violence targeting some of the protesters. These are very uncertain times.

For several weeks, Mahinda Rajapaksa and the cabinet held onto power. There were some resignations in early April, but after that they just carried on as if nothing was going to affect their rule. Do you believe that the brothers are no longer on the same page and that Gotabaya got Mahinda to resign because that was perhaps the only way he could stay on as president?

In the public domain there seemed a tug of war between the two brothers. There were tweets, saying the president was asking the brother to resign and the brother was saying I was not asked to resign.

This went on back and forth between the two brothers very publicly, so many were wondering whether there was some tension and divisions within the family.

But I would be very cautious to say that while there may be disagreements within the family, they will come together. It is about preserving the family dynasty and they are doing it at every cost to the country and the citizens.

While there seems to be some public divisions, I would not read so much into it. The family rule for them is foremost.

Is this quitting just an elaborate charade to ensure that the family retains its hold on power after the storm passes?

That would be the usual assumption if not for the fact that Sri Lanka is in a political and economic crisis.

I’m not sure who is advising the president, but at this moment, he is seen as directly responsible for this crisis. He has no legitimacy in the eyes of the citizens to continue to hold onto power.

There is a curfew and images of military tanks coming into Colombo. Therefore, there is a worry of a growing military presence which doesn’t bode well for Sri Lankan democracy.

It seems he will hold onto power possibly by brute force and that will have a huge impact on Sri Lanka.

They may have overplayed their cards at this moment because the Rajapaksas have been in active politics for several decades and have survived many challenges, but they seem to have misread this one.

There is a clear, overwhelming anger towards the entire family. I don’t think one Rajapaksa can survive this storm. 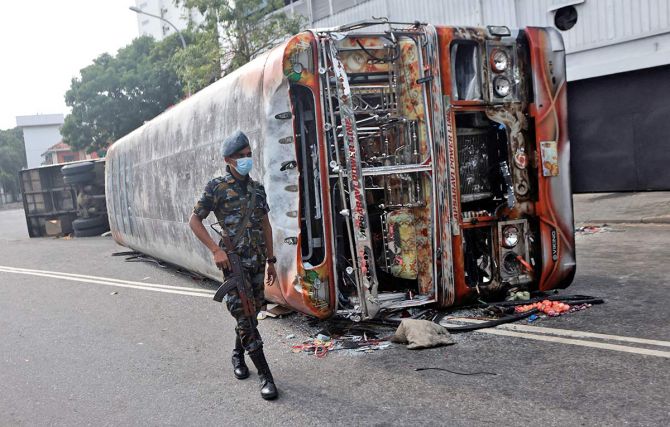 Is the violence directed at Mahinda Rajapaksa’s home and their family memorials symbolic of a final rupture between the Sri Lankan people and the Rajapaksas?

One needs to remember that the Rajapaksa family was very, very, popular. They were identified for defeating terrorism and bringing in peace. Gotabaya Rajapaksa received a massive mandate in 2019 because he was seen as the strong leader who was going to provide security, stability and economic prosperity.

He came on that footing and two-and-a-half years later, it’s been the complete opposite. There is a collapse of the system and a political and economic crisis.

Mahinda Rajapaksa in particular was very popular at one point. He is considered one of the most charismatic political leaders in Sri Lanka, hence his resignation is very significant.

It seems it is the end of the road for Mahinda Rajapaksa at least, but I won’t write off the family entirely despite them being so unpopular. The Marcos are back in the Philippines and I wouldn’t put it past the Rajapaksas to return in a few years.

But at this at this moment, there is real and genuine anger towards the family and those around them for being directly responsible for getting the country into the situation.

What are the factors that have brought an end to the Sinhala love affair with Mahinda and Gotabaya who finished the LTTE?

As I said, Mahinda Rajapaksa was very popular and charismatic. In the south, among the majority community, this family was identified as protecting the Sinhala race and identity.

It’s the economic crisis that really has been the downfall of them. People feeling the brunt of long power cuts, food shortages, long lines for essential items etc. Several people have died while queuing up — and all this is directly attributed to the Rajapaksas’ failing at governance.

In 2019 they took the disastrous decision to impose a ban on chemical fertilisers that has affected the agriculture sector and livelihoods of farmers resulting in food insecurity.

This is seen as a direct result of Gotabaya Rajapaksa ignoring the advice of experts. He brought in tax cuts in 2019 which have been blamed for significantly reducing the revenue of the government.

Several policy decisions taken since 2019 have directly attributed to the crisis, so their popularity has not just diminished, but disappeared.

The Rajapaksa family has taken a nosedive in terms of public sentiment. 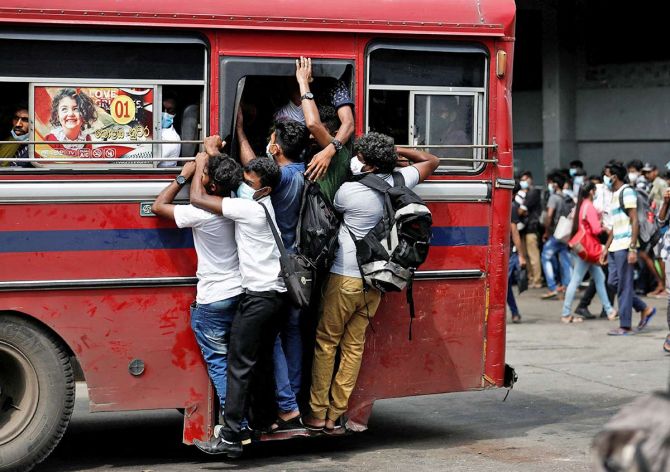 Do you realistically see Gotabhaya stepping down before his term ends? What if anything will compel him to leave the presidency?

Unfortunately, he seems to be holding on and not listening to the demands of not just the protesters, but different stakeholders, professional actors, or religious leaders.

He is refusing to step down and see a peaceful transition. He has been in office only for two-and-half years and has very limited political experience. Amidst a political and economic crisis there is this one man who is wielding so much power.

We don’t know to what lengths he would go to rule and will this lead to another scenario of potential violence and military rule.

It is a very alarming time in Sri Lanka.

The president needs to resign; if he doesn’t, we are going to continue in this stalemate which will come at a larger cost to this country.

One man is holding the country hostage.