The relatively young consumer-centric retail and telecom businesses have helped the conglomerate even as it seeks mega scale in renewable energy. 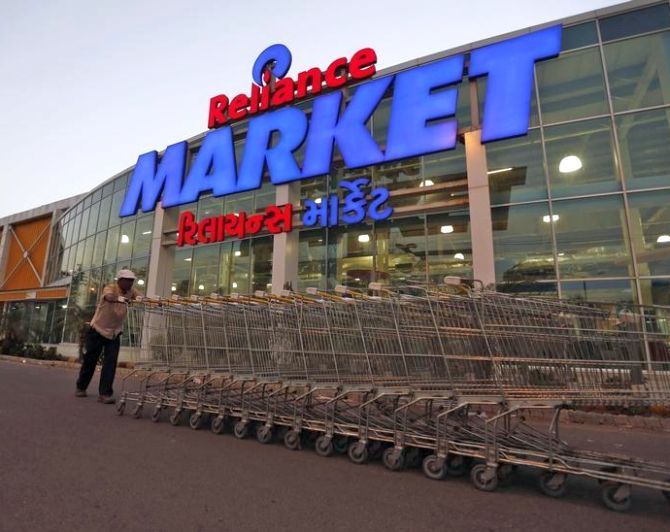 More than a year of Covid-19 has pushed most businesses into gloom but Reliance Industries Ltd (RIL) managed to reduce its gross debt 25 per cent, enabling it to turn towards its next phase of capital expenditure that has come in the form of a Rs 75,000-crore plan for green energy and power storage.

The company managed to stay afloat during the pandemic because of its large presence in the consumer-centric businesses of retail and telecommunication (see chart: “A new Reliance”).

These two businesses constituted 45 per cent of its EBITDA during FY21 from 36 per cent in FY20.

With 425 million telecommunication consumers and 12,711 retail outlets, it is the biggest player in both these businesses in India.

“Reliance is probably the only large company in the world that has successfully transformed itself from being a traditional industrial business into an enterprise that now includes two mega-scale consumer and technology businesses.

“One of these consumer businesses, retail, is only about a decade old. The other business, Jio, is only five years old,” said its chairman and managing director Mukesh Ambani.

Now, its 100 Gw plan for the solar sector will also mean starting from scratch to build a mega-scale in green energy that will put it in direct competition with the Adani and the Tata groups.

Ambani said the company will try the group’s old strategy in this business, too.

To begin with, it will focus on “hyper integration”, which would involve integrating scientific knowledge with continuous technological innovation.

Then will come building a robust business that “catches the irreversible upward curve in the demand for green, clean and renewable energy in India and globally” and, at the same time, follows a downward curve in production costs.

After the scale-up, the path is to follow “efficiency, performance and life-cycle of assets and operations to achieve total system optimisation and economics”.

A Dhirubhai Ambani Green Energy Giga Complex on 5,000 acres in Jamnagar will be set up as the largest integrated renewable energy manufacturing facility in the world.

There will be four giga factories to manufacture and fully integrate all segments of the new energy ecosystem.

Besides RIL’s hallmark strategy of capturing scale in all its businesses, it also wants to keep its transformation into a consumer company intact.

It, therefore, is looking to capture the low end of renewable power business by getting into decentralised solar installations in villages.

This shift towards green energy is also a compulsion for RIL even though it has a huge non-oil footprint, unlike Shell, ExxonMobil and BP. Faced with the challenge of green power sources taking over fossil fuel and investors giving weight to environmental, social and (corporate) governance (ESG) parameters, companies are increasingly moving towards green business.

RIL wants to be net carbon zero by 2035, earlier than the 2050 deadline set by global energy peers.

Starting from manufacturing to constructing and generating, and even financing, it wants to make a comprehensive move towards renewable power.

But the expenditure plans are not prohibitive.

The new capex cycle of Rs 75,000 crore till 2035 though will be just little over 11 per cent of the Rs 6.68 trillion the company spent during FY14-FY20 to build its digital business and also for capacity expansion in its petrochemical business.

The company may, however, have more investment plans up its sleeves.

Besides, a higher turnaround time of renewable projects compared to conventional power projects is a plus.

At the same time, quite like the telecom business, falling rates of solar gear and renewable energy tariffs can pose a challenge to its margins.

It, however, raised capital in excess of Rs 324,432 crore ($44.4 billion) by getting in partners in Jio Platforms, including marquee names such as Facebook and Google’s parent Alphabet, and retail — overall 13 investors have invested in both businesses — and a rights issue.

It even pre-paid $7.8 billion of long-term foreign currency debt, which substantially helped reduce its gross debt to Rs 251,811 crore ($34.4 billion) at the end of FY21.

Funds from this equity raising and those coming from a 20 per cent sale of equity in Reliance O2C Ltd, its petroleum subsidiary, to Saudi Aramco will help it to keep out of another high debt phase despite its renewable energy investment.

Significantly, the green plan would also signal the entry of Mukesh Ambani-led RIL into the power business.

It had kept away from the sector after a 2006 non-compete agreement with his younger brother Anil, even though the two exited the agreement in 2010.