With the LJP headed for a split and in the midst of a public family tussle, The Sunday Express tells the story of how Ram Vilas Paswan built his party around two generations of his family. Until, one day, the threads that bound party and family began unraveling. 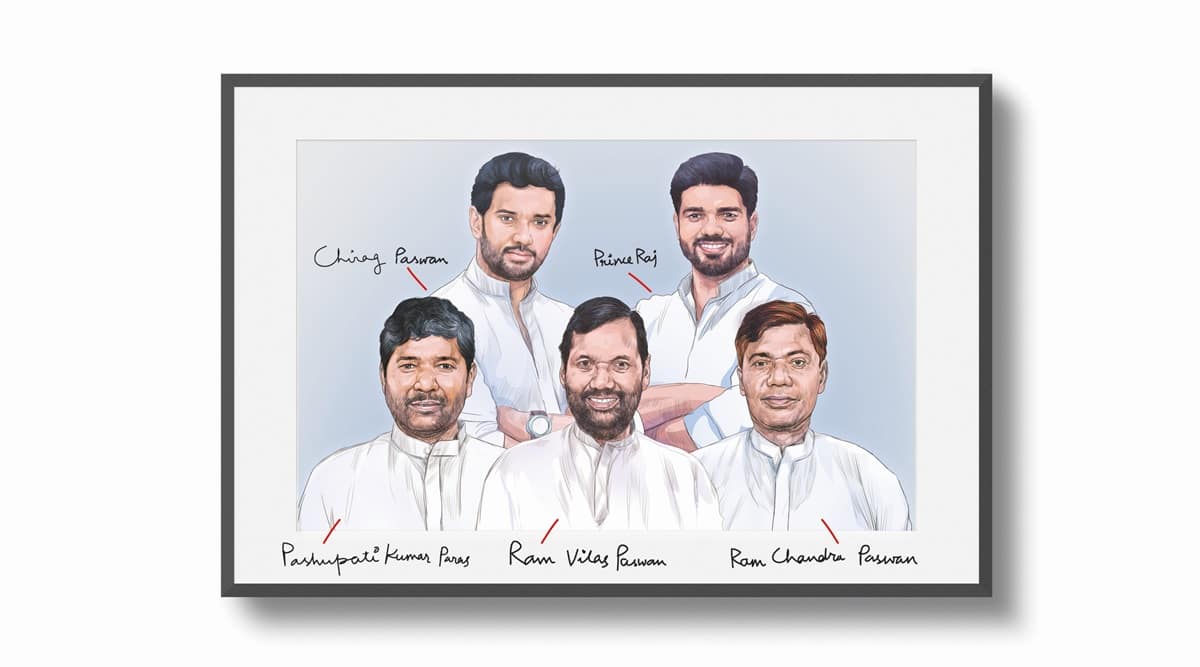 Whenever the question of his party being a family affair came up, Lok Janshakti Party (LJP) patriarch Ram Vilas Paswan would say, “It is the voters who elect us. Winnability is the only factor in elections.”

The prosaic statement, usually made with his trademark smile, was usually left at that. No more questions asked. Even for a state that has had more than its share of dynasty politics, with Lalu Yadav and family at the helm for 44 years, the LJP stood out: Three of the party’s six MPs now are Paswans — Jamui MP Chirag Paswan, Hajipur MP Pashupati Kumar Paras and Samstipur MP Prince Raj.

Paswan would often call his younger brother Pashupati Kumar Paras his “manager” and his youngest brother, Ram Chandra Paswan, his “son” given the 15-year gap between the two.

Stories of the “inseparable” brothers — how, for instance, during Paswan’s visits home from Delhi, Paras would take charge of the kitchen to decide what would be cooked for “bade saheb” — are the stuff of both derision and admiration. The party’s detractors and admirers use “bhai-bhatijawad” alternately to describe nepotism and the close-knit family ties.

Now with the LJP on the verge of a split with two Paswans — Pashupati Kumar Paras and Prince Raj (son of the late Ram Chandra Paswan) — pitted against the third, Paswan’s son Chirag, the first public reaction from within the family on the “need to stay together” came from Rajkumari Devi, the estranged wife of Ram Vilas Paswan.

“Ram Vilas ji always kept his family together. The Paswan family should stay together,” said Devi, who lives at the Paswans’ paternal home in Shaharbanni village of Bihar’s Khagaria district. Her two children, Asha and Usha, live in Patna.

But now, as the family goes through a public fallout, questions are being raised not only about the damage it would do to the family but also the party that Paswan founded in 2000.

The eldest of the three sons of Jamun Das, a marginal farmer who grew maize, Paswan’s journey began from a mud house by the Kosi in Shaharbanni village. In an area often ravaged by the annual floods, the terrain and the struggle to sustain his family of five on three bighas are said to have steeled Das’s resolve to ensure his children got an education.

Ram Vilas went on to became a law graduate and qualified for the job of a Deputy Superintendent of Police. Jamun Das was elated, but the young Ram Vilas, swept by the idealism of socialist politics, had other plans. He decided to join politics.

The rest, as they say, is history: Nine Lok Sabha wins (eight from Hajipur, one Rosera), two terms in the Rajya Sabha, and Union minister under six prime ministers.

Paswan ensured his rise was not exclusively his. He took his brothers along, sharing with them his legacy and politics. But it was the LJP, the party he formed after separating from the Janata Parivar, that gave him the room to further accommodate his family.

In 1977, the year Paswan won Hajipur Lok Sabha seat, his younger brother Paras won the Alauli Assembly seat under Khagaria. A school teacher, Paras went to win the seat seven times. He remained an assured politician, happy to stay in his elder brother’s shadow, secure in the belief that he would be taken care of.

Paswan, of course, never disappointed, making Paras state president of the LJP and leaving him to manage party funds and handle ticket distribution.

Meanwhile, the youngest of the Paswan brothers, Ram Chandra, who ran a brick kiln, was itching to join politics. The story is that he got a sympathetic journalist to drop a hint to the senior Paswan about his desire to enter politics. The recommendation had prompted the elder brother to indulgently ask, “Aye re, Ram Chandra, toy chunav ladbhay (hey, Ram Chandra, do you want to contest elections)?”

And thus, the youngest brother too entered the political arena, winning the 1999 Lok Sabha election from Rosera as a JD(U) candidate. After delimitation, he switched to Samastipur, where he lost in 2009, but won in 2014 and 2019. But months after the election, he died of cardiac arrest. His younger son, Prince Raj, then fought the bypoll from Samastipur — and won.

The family story thus played along perfectly for well over a decade — Paswan the face of the party in Delhi, Paras in charge of the state unit, and Ram Chandra the perfect foil to his two elder brothers — until the next generation of the Paswans came of age.

The first hint of trouble came around 2013, when Paswan began grooming Chirag, his son from his second wife Reena, for politics.

Chirag, an engineering graduate with a failed Bollywood career behind him, seemed too suave for the rough and tumble of Bihar politics, but there was always papa Paswan to handhold him. With the LJP part of the NDA and riding a Modi wave, Chirag went on to win two successive Lok Sabha elections from Jamui — in 2014 and 2019.

By then, there was another Paswan progency who had taken a liking for politics — Prince Raj, younger son of Ram Chandra Paswan, who came with a Master’s degree in International Business from Madurai Kamraj University. He started off as advisor to his father, sharing a close bond with ‘bhaiyya’ Chirag.

But soon, there was trouble. Party sources say that with Chirag having more of a say in organisational matters, uncle Paras began to be sidelined in the LJP and the extended family.

In November 2019, with Paswan ailing, he named Chirag his successor. In the midst of the current family tussle came another revelation from Chirag — that at the Delhi residence of the senior Paswan, where Chirag was ‘elected’ national president, Paras had only stayed briefly, leaving after five minutes.

Somewhere along the way, relations between the cousins too soured. Party sources say the two — Prince as state unit chief and Chirag as national president — often got contrasting versions of the same story, making it tough for Prince to choose between the Chirag and Paras camps.

With Paswan’s death, the tensions grew sharper. Paras’s visits to Chirag’s 12, Janpath residence became less frequent, while he gradually won over Prince to his side, with whom he shared his official residence in Delhi.

Amidst all the mudslinging, comes another bombshell — a complaint of sexual exploitation against Prince. Where does the family — and by extension, the party — go from here? Will Paras and Prince be the LJP? But there’s one other position that’s still up for grabs: that of the Dalit face in the Bihar. With former CM and Hindustani Awam Morcha (Secular) leader Jitan Ram Manjhi almost a spent force, will one of the Paswans rise to fill the space that Ram Vilas Paswan once occupied?

Chirag maintains he is in that race. A senior leader close to him says, “Chirag has to take to the dust and grind of Bihar. He may even think of an alternative alliance beyond the BJP. Let us wait and watch.”