We salute the Mi-8 today on the occasion of the 32nd anniversary of Operation Cactus.
Through its glorious service career, the Mi-8 provided the IAF with a lineage of professional helicopter aircrew, notes IAF helicopter pilot veteran Air Commodore Nitin Sathe (retd). 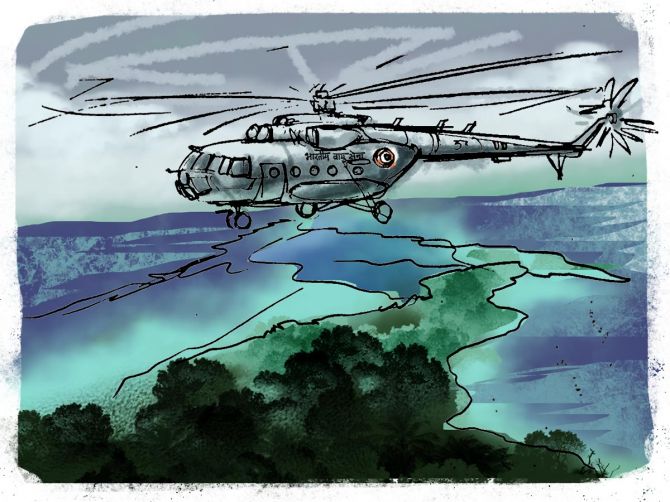 I learnt to fly twin engine helicopters on the Mi-8 in the farthest corner of our country — in Kumbhigram (Silchar) in 1988.

Having been inducted into the IAF just after the 1971 War, the Mi-8 — though ageing — was the backbone of the Indian Air Force’s medium lift helicopter fleet at that time.

I was posted to Chabua in Assam to fly the much newer, powerful and advanced Mi-17. The Mi-17 could only be flown by people who qualified on the Mi-8; that was the rule then.

So here I was, at Silchar, in the rainiest and the most humid parts of the country to learn to fly this machine.

And what a machine it was! All your motor skills and knowledge of aerodynamics and the aircraft itself were required to their fullest to fly this beauty.

It taught you how a helicopter was to be handled like a baby; one learnt to be patient and soft with the machine because she would complain and complain harshly if you rough-handled her!

It was just a matter of time when the Mi-17 would slowly replace the Mi-8. But so robust was this machine that it took another 27 years before the IAF finally retired it from its inventory.

It was the 17th of December 2017 when the last of the Mi-8s was phased out at a glittering ceremony at the IAF station in Yelahanka, Bangalore.

The IAF’s helicopter fleet is the youngest, being raised in 1954. The fleet has done extremely well for itself over the years proving the mettle of the men in blue.

Be it the wars of 1965, 1971 or Kargil, and countless humanitarian assistance and disaster relief, the helicopters have been able to achieve their tasks with elan, earning the respect of our countrymen.

One such operation not talked about much is the operation carried out in the Maldives in November 1988 codenamed Operation Cactus.

112 Helicopter Unit was tasked to assist the action in the Maldives in November 1988. I chanced upon an article written by IAF Veteran Wing Commander R Raju Srinivasan for the Rotor India magazine, produced by the Rotary Wing Society of India. It was due to RWSI’s permission that I could adapt this article for Rediff.com.

This was the time when we were fully occupied with what was happening in Sri Lanka (Operation Pawan) and on the Siachen Glacier (Operation Meghdoot).

Maldives is 450 km from our sea borders of the south, 600 odd km from Thiruvananthpuram. It had only one airport located on Hulhule island near the capital, Male.

A protectorate of Britain since 1887, the Maldives gained independence in July 1965, and in 1968, became a republic.

The 3.5 lakh population is mostly Muslim and the country has seen political unrest right since its independence.

The then president, Maumoon Abdul Gayoom, had seen two attempts to overthrow him till 1988. In a daring raid on the presidential palace on November 3, 1988, the rebels took over government offices and declared a nation-wide emergency.

Gayoom went into hiding along with many of his supporters seeking intervention from the governments of India, Great Britain and Sri Lanka.

The Rajiv Gandhi government was the first to respond and what followed was troop intervention by the Indian armed Forces. Operation Cactus had begun.

44 Squadron located at Agra, commanded by then Group Captain A G Bewoor, was tasked to fly in two IL-76 strategic lift aircraft with close to 600 troops into Hulhule on the night of November 3.

While posted at the Defence Services Staff College at Wellington, I had the opportunity a number of times to listen to what Bewoor Sir and his team did on this operation and each time I ended up learning something new.

At about 2200 hours, the IL-76 aircraft landed in pitch darkness and the troops quickly moved over the small islands in boats and captured the rebels; the President and his staff were taken to safety.

It was a brave mission and the risk taken by the crew on this mission to land at an unlit runway with no support from the ground needs special mention.

While narrating the story, Bewoor Sir makes you shudder when he speaks of how he was uncertain about the condition of the runway.

It would have been a catastrophe had the rebels blocked the runway with vehicles and boulders and this would have led to loss of the aircraft, and probably the men inside too.

The Indian Army had sent its best — the para-commandos of 3 Para — for this mission. Armed with only tourist maps and small weapons, they achieved the impossible without any casualty.

The rebels obviously had not reckoned with external intervention and were taken by surprise. 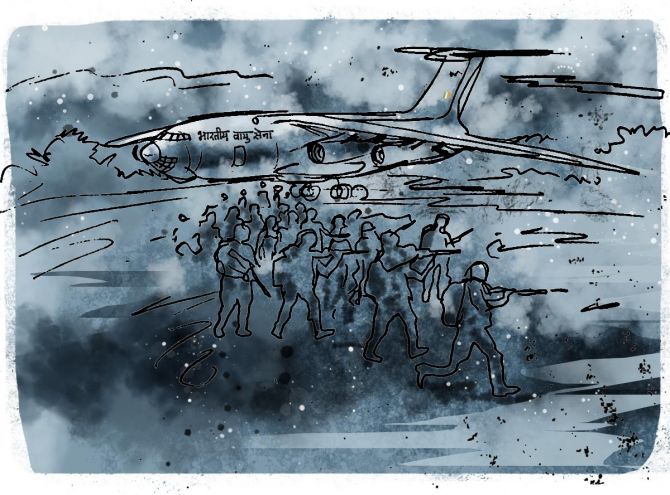 Meanwhile unknown to Bewoor Sir and his crew, 112 HU, commanded by then Wing Commander S K Sharma, was tasked to send two Mi-8 helicopters to the islands.

Just for the distance involved, the Mi-8 had to be fitted with extra tanks of fuel. Led by the commanding officer himself, the two helicopters positioned themselves at Trivandrum on the night of November 3, 1988.

Sharma Sir’s co-pilot was another Sharma, a young flying officer then. The second helicopter was flown by the Flight Commander, then Squadron Leader K J Bhat with then Flying Officer Sai as his co-pilot.

The unit technical officer, then Flight Lieutenant Sinha was on board with his servicing crew and whatever little spares that could be carried.

While preparing the aircraft for the long flight, one of the machines sprung a fuel leak from its internal tanks and a third helicopter- flown by then Wing Commander D N Sahai was brought in by night as a replacement.

The takeoff for Male was planned at daybreak the next morning and the crew got down into mission planning and preparation way into the night.

For flying over the sea, the Mi-8 helicopters require floats (for emergency landing on water) and a weather radar to avoid bad weather.

Also, there are no navigational aids or markers over the vast expanse of the ocean. The ground beacon at Trivandrum could help you navigate to about 100 odd km outbound; therefore, with the primitive instruments and navigation aids on the helicopter it was an arduous task to plan and fly this long journey.

Also, there were no aids on ground at Male to help them with the navigation with the Non-Directional Beacon at Male being shut down.

While both helicopters were not fitted with floats, only Wing Commander Sharma’s aircraft had a serviceable weather radar.

Despite all this, and, with bad weather enroute which forced the helicopters to fly skimming the waves, the mission was accomplished as planned.

While they approached to land at Hulhule, there was no contact with the men on ground and therefore no surety of the airfield being safe.

After carrying out a few orbits to ascertain that there was trouble brewing on ground and no firing going on, the helicopters landed at the airfield to be received by the happy faces of the para commandos.

The next three days saw these helicopters being flown all over the islands of the Maldives, picking up and dropping the red bereted commandos and ensuring that there was no more conflict or trouble on the islands.

By the 6th of November, the islands were restored to normalcy with President Gayoom back in harness. The first international flight landed the same day signalling the end of the siege.

The Mi-8s stayed for a couple of days to help maintain peace and normalcy and carried out their return ferry on November 8.

The role of the Mi-8s in Operation Cactus went unnoticed. The brave crew achieved the task despite all the technical difficulties and there were no medals or recognition for what they did.

Indeed, the helicopter, despite being a noisy machine with its crew ,goes about its tasks silently and achieves the impossible without a fuss.

We salute the Mi-8 today on the occasion of the 32nd anniversary of Operation Cactus.

Through its glorious service career, the Mi-8 did not just establish itself as a mainstay of the helicopter operations, but also left an indelible mark on the future by providing the IAF with a lineage of professional helicopter aircrew.

Air Commodore Nitin Sathe retired from the Indian Air Force in February 2020 after a distinguished 35 year career where he helped rebuild the IAF’s Car Nicobar air base after it was devastated in the 2004 tsunami.
The author of three books, you can read Air Commodore Sathe’s earlier contributions here.