From small restaurants to mighty software companies, it is businesses, not the government, that create jobs.
Yet, in a cruel irony, they have to fight extortive and brutal State power every step of the way, says Debashis Basu. 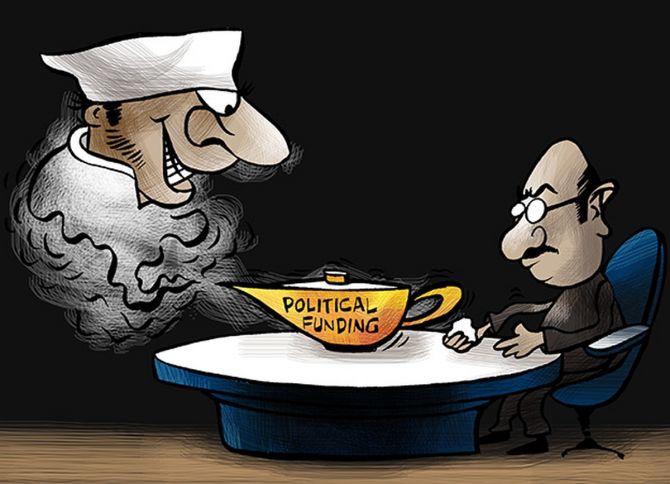 Why was it giving away so much? IFB Agro was officially paying extortion or ransom money in the garb of electoral bonds.

This is obvious because the disclosure mentions ‘excise-related issues faced by the company’ and that its decision about political contribution was in the context of ‘such issues’.

In plain language, to avoid harassment and extortion by the state excise department, it has decided to pay off through the bonds.

Earlier disclosures show that the problem has been festering for several years.

On June 26, 2020, and again on December 22, 2020, IFB Agro said its distillery in South 24 Parganas (West Bengal) was attacked by armed goons, who beat up employees, held them hostage, and shut down the distillery.

Nobody was punished and a complaint to the chief minister had no impact.

IFB Agro charged it was ‘singled out by certain excise officials for not succumbing to their illegal demands’.

In October 2021, IFB Agro announced a board decision to subscribe to Rs 25 crore (Rs 250 million) worth of electoral bonds.

Its annual report that year details the hardship faced due to illegal demands by the state excise department, leading to the closure of its factories for several days.

It would appear that the state and the party are working in a coordinated fashion.

Extortion by goons of the ruling party is rampant in certain parts of India. West Bengal is notorious for it for decades now.

It started when the state was ruled by the Communist Party of India-Marxist.

Everything is controlled by the local party office. For instance, building material, such as sand, bricks, steel, and cement, has to be procured from a list of suppliers maintained at the party office.

If you get supplies from anyone else, your project will be shut down. If you complain to the police, they will promptly inform the party office and ‘advise’ you to ‘settle’ it.

The continuous and steady decline of West Bengal, which was one of the most prosperous states in India, can be attributed first to the unreasonable demands of the organised labour and then to unbridled extortion by political parties.

Social media was shocked by IFB Agro’s accusations and there were articles for a day in the mainstream media. But the government, regulators, investigation agencies, and even business associations were largely silent and have ignored this episode.

This is perhaps because businesses in Bangalore, Gurgaon, Noida, Mumbai, Pune, and Gujarat do not face unreasonable demands, followed by violence.

In many parts of India, businesses regularly fund politicians, but under a policy of ‘live and let live’. In West Bengal, it quickly gets adversarial and violent.

What happens to businesses in West Bengal may be extreme, but there are a variety of ways by which the state has been extorting from businesses for decades.

From the 1950s to the mid-1980s, the government was directly involved in running industries and crowding out serious enterprises that create productive jobs.

Relentless State expansion into hotels, airlines, and even bread-making happened on the specious grounds that Indian industry was not mature enough to run large enterprises.

The nationalisation of well-run businesses was worse than even extortion. It was pure theft.

Over the years, we have heard politicians say that the government has no business being in business. Progress on changing this has been slow.

Meanwhile, the State has found another way to strip businesses of cash — the mandatory corporate social responsibility (CSR) spending of 2 per cent of post-tax profit.

This legislation was not imposed by any ‘socialist’ government of the 1970s.

It got introduced in 2013 by the United Progressive Alliance 2 and continued by the so-called right-wing government of Narendra Modi.

The third way businesses get extorted is through piles of red tape.

Rajiv Bajaj has alleged: ‘It is overregulation that is killing industry.’

No wonder, despite ranking eighth among 140 countries under ‘cultural resources and business travel’, India ranks 109 in ‘tourist service infrastructure’ in a study by the World Economic Forum.

A restaurant needs up to 15 licences in India compared to four in Singapore and two in Turkey. For the babus, each licence is an opportunity to make money.

Finally, look at the extortive power of the State when it comes to paying tax or when it loses a major legal battle.

Successive governments have made unjust tax demands, lost in court, and then promptly changed the law! Businessmen and citizens must always lose.

In infrastructure projects, subsidies and arbitration awards are withheld, causing a cash crunch and bad loans, but no one is held accountable.

When Narendra Modi asked thousands of assembled youngsters at an election rally ‘Apko naurki chahiye ki nahin chahiye? (do you want jobs or don’t you?),’ he was surely not promising them government jobs.

From small restaurants to mighty software companies, it is businesses, not the government, that create jobs.

Yet, in a cruel irony, they have to fight extortive and brutal State power every step of the way. Why are they silent?

Debashis Basu is the editor of www.moneylife.in
You can read his earlier columns here.